‘The Rivals’ Delights with Witty Humor and Sharp Performances 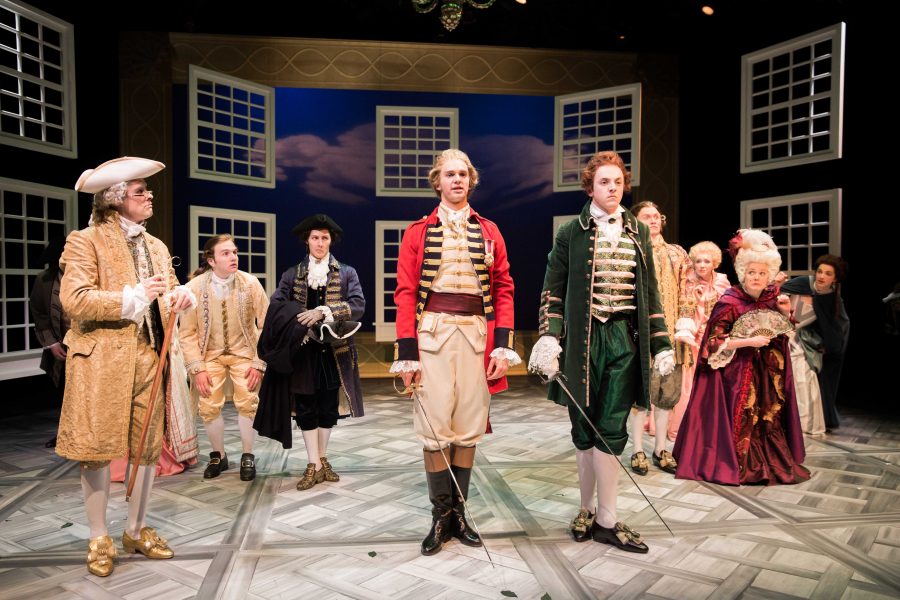 Ten minutes into the University of Utah’s production of “The Rivals,” I was entirely lost. I only understood every two in five words. I couldn’t have said which characters were which or who knew whom. I’m not one for traditional theater, and this show reinforced my initial misgivings with its 18th century setting, heavy accents and convoluted dialogue. In all honesty, I was exceedingly bored and not at all prepared to sit through a nearly three-hour-long show.

Another 10 minutes later, I fell in love with the show. I began to understand the thick accents and complicated manner of speech. Little by little, the interactions between characters began making more sense. I caught the odd joke here or there. I started to realize the skill with which these actors maintained heavy accents all as they delivered incredibly complex lines without a stutter. It took me long enough to catch on, but at last I was hooked.

I loved this show. The plot was gripping and hilarious and the characters were entertaining. The staging moved dynamically and naturally to hold my attention, even while the plot had relatively little action to it. When a duel started up near the end of the show, I actually felt disappointed at the shift away from the sharp banter that characterized most of the show.

The real success of the show comes from the razor-sharp dialogue and the actors’ excellent timing and delivery. Each character feels vibrant and genuine with their own motivations, and the actors each seem perfectly equipped for their individual roles. I loved the tortured and implacable Faulkland (Benjamin Navarez), Lydia (Savannah Moffat) and her hunger for the most torturous love and the ridiculous malapropisms of Miss Malaprop (Emily Nash), whose name actually gave birth to the aforementioned term. I couldn’t stop laughing at Sir Anthony Absolute (Connor Neils Johnson) as he oscillated between rage and lasciviousness. I marveled at Julia’s (Jessica Weyman) unending patience after each new offense. I found myself rooting for the enthusiastic self-preservation of Bob Acres (Nathan Vaughn). Each one of these actors held me enthralled to the very end of the performance.

“The Rivals” sold out its opening night. Even as the show entered its final weekend this past Friday, the small Babcock Theater was packed with an eager audience. Judging by the raucous laughter and repeated applause, none of these theatergoers left unsatisfied. I believe I speak for every one of those audience members when I say that this production was a resounding success.