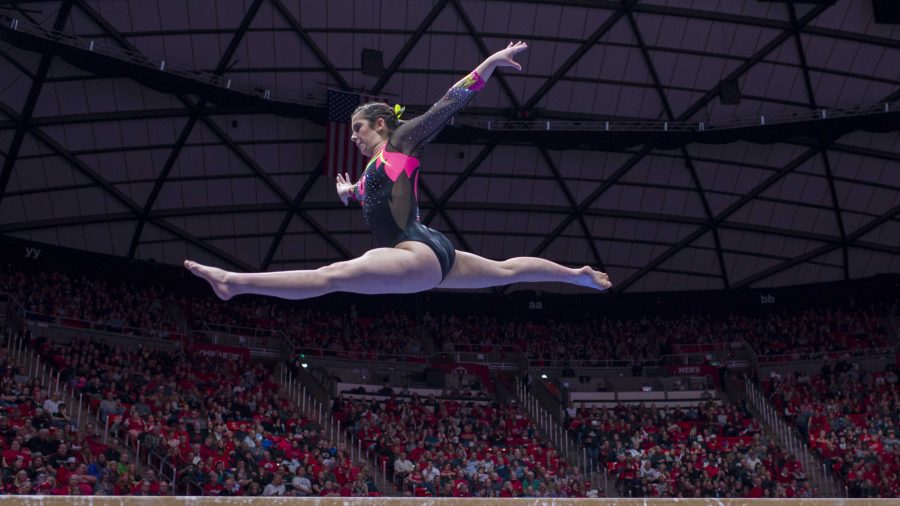 Similar to most collegiate athletic teams, the University of Utah Red Rocks gymnastics team hosts an annual summer camp for young gymnasts who want to learn from both college athletes and coaches. With many schools, this is where the recruiting process begins.

Sophomore Alexia Burch found herself looking into camps after a fellow gymnastics mom told her that camps were the way that coaches recruited athletes to their programs.

“After nationals that year, my mom and I were just looking at camps and we happened to notice Utah’s camp because this has always been my dream college. I wanted to be here, so we looked up the camp and I got into the camp that summer and Greg [Marsden] actually approached me at that time, saying they wanted to start recruiting me and from then it was just me keeping in touch with the coaches and getting better in J.O. [Junior Olympics],” she said.

While it is common for local gymnasts to aspire to be Red Rocks, to co-head coach Megan Marsden, it was unique to see an athlete from Nevada wanting to take the journey to Utah.

“Obviously we have a couple of local girls on our team that wished to be a Red Rock all their life but for somebody in Reno, it seems just a little bit different,” she said.

Before her time at Utah, Burch, just like many other members of the Red Rocks, was apart of the U.S. Junior Olympic team. During her 2015 campaign with the team, she was named the champion in the all-around category as well as on the floor. She took fourth on the beam, an event that Utah fans have come to know her on. In 2015, she qualified for the prestigious Nastia Liukin Cup alongside current teammate MaKenna Merrell-Giles.

During her first year on the team, Burch competed on beam seven times before she was sidelined with an injury.

Before her injury ended her freshman campaign, she scored a 9.90 on the beam in the Red Rocks victory against Arizona. She also had exhibitions on three other events during the season.

Burch came back with something to show this season. Not only was she back on the beam lineup, but she also clinched a spot on the vault lineup (she didn’t compete on the event only four times this season) and is an alternate on the floor and in the seventh spot in the bar line up. Not only has she tied her career high on the beam, she has set a career high on the vault at 9.900.

“My one thing that was in my mind all summer was to get back stronger and get more skills and more consistent in every event, not necessarily just the events I was doing last year. I want to be a contributor on all events and do all around. I feel like I hit that goal and coming out of preseason I felt prepared for the season,” Burch said.

Marsden sees Burch on the floor event more in the future as well as getting even better on an event that she used to struggle on.

“The cool thing is she really was not a good bar worker and she and Tom [Farden] have worked diligently for two years together and it is unbelievable. If you asked anybody on the team how far Lexi has come on bars, they would tell you she was scary on that event and now she is our backup on that event. She’s our number seven,” Marsden said.

As she reaches the halfway point of her career, Burch not only hopes for the team to finish in the top three at nationals during the rest of her time, but for her as an individual to get the title of all-around competitor.

Marsden is looking forward to seeing what Burch does not only on the floor but also as a leader for this team.

“I think she has some leadership qualities so I’ll look forward watching her in the second half of her career to provide good leadership for Utah Gymnastics, and I think she could be one of those people, potentially a captain at some point,” Marsden said.

Utah fans still have lots of time left with Burch, and as an athlete, she still has lots of potential to bring to each and every meeting with the team.

“I still think the sky’s the limit for Lexi. I don’t think she has reached her full potential,” Marsden said.