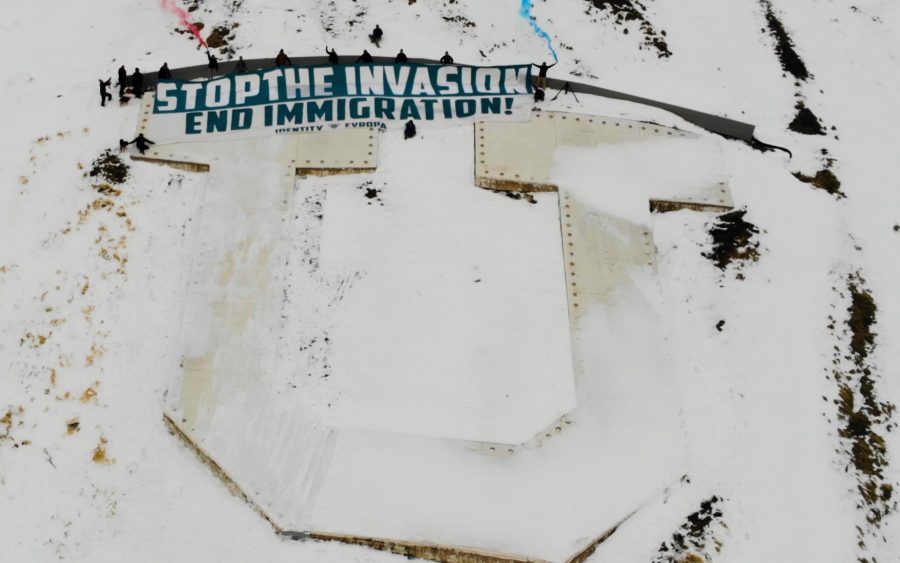 Identity Evropa held a banner reading, "Stop the invasion, end immigration," above the Block U on Saturday, Feb. 9. (Photo courtesy of Patrick Casey)

In recent years, the University of Utah has been the target of racist messages and propaganda from numerous hate groups. Over 240,000 of these groups’ chat room messages were leaked in March by Unicorn Riot, a non-profit left-wing media collective, revealing that some of the flyers hung on campus may have been posted by a former U employee.

The leaked documents indicated that Manuele Antonacci, a returned missionary from The Church of Jesus Christ of Latter-day Saints and former radiation analyst with U Health, is associated with Identity Evropa (IE), which is designated as a hate group by Southern Poverty Law Center and the Anti-Defamation League. Since the leak, IE leader Patrick Casey announced on Twitter that the old group “has been retired” and has been rebranded as the American Identity Movement.

After Unicorn Riot’s publication of the messages, a Colorado Springs faction of Antifa worked to uncover the names behind the pseudonyms of the IE members who posted on the server.

A WordPress article posted by the Colorado Springs Anti-fascists identified Antonacci as a frequent poster on the server who goes by the pseudonym “Grayson.” The identification was based on Grayson’s admission — in a chatroom — to being a licensed pygmy goat judge.

The National Pygmy Goat Association lists Antonacci as only one of two judges in the state of Utah. Combined with other factors, the connection allowed for the anti-fascist group to link Antonacci to his pseudonym. When contacted by The Daily Utah Chronicle, the National Pygmy Goat Association said they did not wish to provide comment on their connection to Antonacci, but stated that “political views do not influence the ability to judge goats.”

In a post to the chatroom on Nov. 18, 2018, Grayson shared a picture of his home and vehicle. The home number listed matches Antonacci’s address listed on the pygmy goat judges’ webpage.

According to documents obtained by the Chronicle, Antonacci was employed with the U as a radiation analyst from Sept. 2006 until Nov. 6, 2018. Records do not specify whether he quit or was terminated.

While Utah’s Government Records and Access Management Act requires the release of some information about a public employee, performance evaluations — which may include disciplinary actions — may be withheld. Though the Chronicle requested records of disciplinary action for Antonacci from the U administration, none were provided.

Christopher Nelson, a spokesperson for the U, said, “The university does not comment on employee disciplinary actions other than to confirm dates of employment.”

On Nov. 2, 2018, four days before his employment ended, Antonacci posted on the IE server a slew of images of stickers and IE propaganda that he appears to have affixed in various locations on campus. Posting on campus without permission is a violation of university policy. Members of Students for a Democratic Society at the U were given a formal warning for posting on campus without permission after hanging banners in response to white nationalist attempts to recruit on campus.

According to the leaked chats, Antonacci joined IE on Aug. 21, 2018. In one of his first posts, he declared that he was from Utah and asked if any other members were as well.

“It can get pretty lonely when you constantly have to bite your tongue,” he wrote.

Soon after Antonacci joined, he began sharing his views about people from various ethnic backgrounds, including some of his co-workers at the U. On Aug. 23, 2018, he commented on how “there are entire labs with more than a dozen lab workers, post docs, lab techs and they are all Chinese or Indian” saying “it’s hard to see stuff like that.”

In another post referring to minority graduate students in the medical field, he said, “they might be doctors but when I talk to them they seem to be so dumb and unintelligent.”

Antonacci’s views shared on the server were oftentimes blatantly racist toward those who did not fit his definition of “white.” On Sept. 9, 2018, he wrote, “I had to teach a one time class at the University the other day as a guest speaker and I am looking around the room at this class of about 50 students and I caught myself desperately looking for white students in this sea of asians, indians and hyspanics (sic). I kept looking at the white students the whole time I was speaking.”

Antonacci went on to call the mannerisms of non-white students “unintelligent” and described the “sense of kinship” he claims to have felt with white students.

On Aug. 30, 2018, Antonacci described a medical appointment expressing unconcealed racism and anti-Muslim sentiments when referring to his attending nurse. He wrote that, in his feedback at the end of the visit, he requested a “white, English speaking nurse.”

It is unclear whether Antonacci’s employers or any of his co-workers were aware of his perspectives and involvement with IE.

BYU and The Church of Jesus Christ of Latter-day Saints

In a number of posts, Antonacci is vocal about his connection to the church. He mentions attending Brigham Young University and serving a mission in Cyprus, Greece. Both pieces of information provide connections that tie Antonacci to his alter ego, “Grayson.”

A post from April 7, 1999, on a website for church missions located in Italy, stated that “President Anderson mentioned that a sponsor was needed for Manuele Antonacci of Parma who has been serving as a missionary in Greece. He would like to attend BYU and needs a sponsor.”

In a post on the IE server on Nov. 11, 2018, Antonacci mentioned serving an “LDS mission” in Cyprus, Greece. On Oct. 8, however, the former U employee disavowed current church doctrine, saying, “I am not going to give a dime to this apostate Church which has forsaken its history and doctrines.” 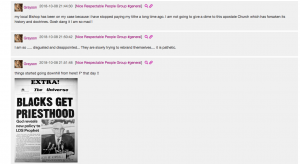 Antonacci claimed this is due to the 1978 revelation announced by church leaders that allowed black men to receive the priesthood.

On Sept. 8, 2018, he wrote, “I am Mormon; I don’t call myself LDS because I am disappointed with all the doctrinal changes in the mainstream LDS Church. I consider myself Mormon fundamentalist.” In another post, Antonacci said, “Fundamentalist Mormons got it all figured out; they don’t allow non white in their communities and they maintain their gene pool pure.”

He once became defensive on numerous occasions when his own ethnicity’s “whiteness” was called into question by his fellow group members.

“Maybe I am not getting the humor but in the last two nights I have seen several comments about Italians or Romans not being white. I find it slightly offensive,” he wrote on Aug. 27, 2018.

His Italian ancestry is not the only thing the former U employee and IE member appears to have been defensive about in the chatroom. While xenophobia dominated many of his posts, other users’ homophobia appears to have put him on guard.

On Dec. 14, 2018, in response to a homophobic slur, he responded, “I thought [IE leader Patrick Casey] told us that we shouldn’t use derogatory terms.” As other members continued to insult gay people, Antonacci said, “To be fair, there is a big segment of the LGBT community who hates the militant in your face faction. I know some dudes who are like that.”

Under the leadership of founder Nathan Damigo, IE had a policy of “don’t ask, don’t tell” regarding gay members, according to the nonprofit news organization Truthout.

As it turns out, Antonacci may have been referring to his own views. As a student at the U, Antonacci once wrote an op-ed for the Chronicle in which he claimed to have been expelled from BYU for breaking the private university’s honor code by engaging in a same-sex relationship. No dates were given in regards to his transfer from BYU to the U.

Antonacci was a frequent contributor to the Chronicle’s opinion section while he was a student.

His articles often expressed highly liberal and anti-Republican views. While it is not clear what caused Antonacci to radically change his opinions, he said on the IE server that he underwent a “liberal phase.”

On Oct. 8, 2018, he wrote, “I am ashamed to admit that — years ago — I was one of those dumb blinded fooled Democrats who would have voted for Pres. Obama for third term.”

The Block U Action

On Feb. 9, members of IE climbed on top of the concrete Block U and held a banner stating, “Stop the invasion, end immigration.”

Among the leaked messages from IE are records of the Block U action being discussed. On Feb. 10, Patrick Casey — who posts under the username “Reinhard Wolff” — posed a message asking all members to “help out by sending [Casey’s] tweets and the action report to the following entities.” The post goes on to list a number of news outlets in Utah, including the Chronicle. 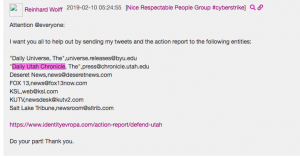 Antonacci appeared to have helped coordinate the event, telling members of the group on Feb. 6 to “bundle up” if they were planning on coming to Utah from out of state. On Feb. 15, six days following the action, he wrote, “call Mrs Watkins on her crap! Post [a] comment or write a letter.”

In response to the group posting propaganda on campus, U President Ruth Watkins released a statement on Jan. 26 reading, “While our campus is an open forum where individuals may express their views, the rhetoric used by these groups does not align with or reflect the University of Utah’s values. These cowardly, faceless and non-university sanctioned tactics are designed to disrupt and frighten individuals and communities, and to garner attention for an insidious ideology that has no place on our campus or in our community.”

After the action, Casey told the Chronicle that it had been partially organized as a response to Watkins’ statement.

In regard to Antonacci’s involvement with IE, the U referred back to Watkins’ Jan. 26 statement. Additionally, Nelson stated that “any student or employee who feels discriminated against, or witnesses discriminatory behavior on campus, should report their experience to the Dean of Students or the U’s Office of Equal Opportunity, Affirmative Action, and Title IX.”

The Chronicle contacted Antonacci via phone on April 8, but he declined to provide comment. He did, however, send a text message with an image of one of the liberal op-eds that he once published in the Chronicle, asking, “Do these look like the views of a white supremacist?” However, when asked if he was denying his involvement with IE, Antonacci failed to respond.

This article has been updated to better clarify the author of the WordPress article connecting Antonacci to his pseudonym “Grayson.”