Coach Kinneberg Gets 600th Career Win in Series Finale Over No. 12 Arizona State 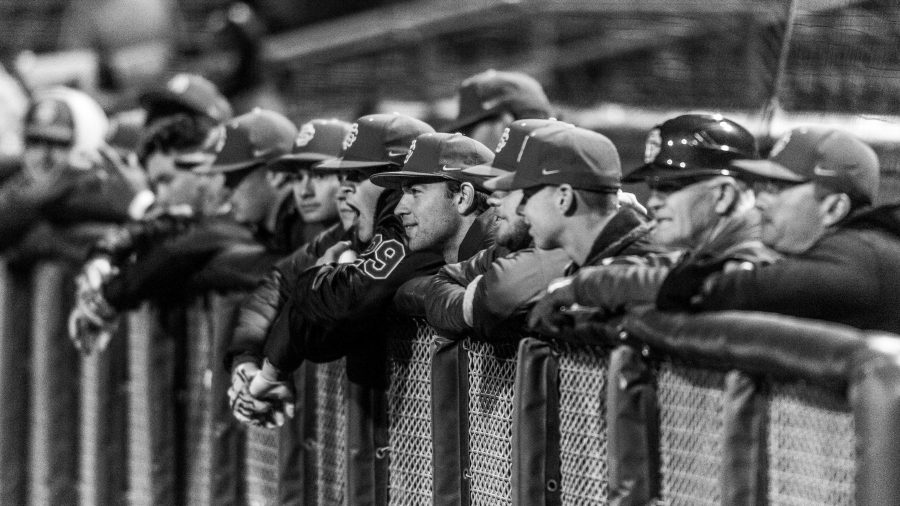 The USC dugout during an NCAA Baseball game at the Smith's Ballpark in Salt Lake City, Utah on Thursday, April 11, 2019. (Photo by Kiffer Creveling | The Daily Utah Chronicle)

The University of Utah baseball team went 1-2 against the No. 12 Arizona State Sun Devils in the Pac-12 South matchup.

Game 1 between the Utes and the Sun Devils was a nail-biter that ended 12 innings after first pitch.

Although Utah and Arizona State got off to a slow start, fireworks ensued through the final eight innings of the game.

The Sun Devils began the weekend’s scoring before Oliver Dunn hit a shot over the right field wall, ricocheting off the scoreboard.

More scoring followed as both teams put one run each on the board, moving the tally to 3-2 heading into the ninth.

ASU added one in the top of the ninth before Briley Knight began the Utes’ comeback with a double over the head of the left fielder in the bottom of the inning. Chandler Anderson and Matt Richardson walked to load the bases setting up Zack Moeller. Moeller’s sacrifice fly to right field put the Utes within one run once again. With two outs in the ninth, Erick Migueles tied the game on a ground ball through the right side.

Arizona State wouldn’t allow Utah much breathing room as the Sun Devils scored seven runs in the top of the twelfth. Utah’s Knight hit his first career home run at an attempt at a comeback, but to no avail.

The Sun Devils’ late heroics were too much for the Utes, capping off a wild evening at Smith’s Ballpark. Arizona State took down Utah in Game 1, 11-6.

Utah’s bats came to life in the first innings of Game 2 before ASU’s pitcher Boyd Vander Kooi settled in to throw a complete game.

Migueles singled to right field in the first to bring home Dunn and put the Utes on the board first. Shea Kramer doubled down the left field line two batters later to score Moeller from third.

One run came across for the Sun Devils in the second inning to chip away at Utah’s lead.

Dunn continued Utah’s hit parade in the bottom half of the inning, doubling to left field to score Dominic Foscalina.

After a triple from Migueles to start the bottom of the third, Rykker Tom hit a sacrifice fly to center to add to the Utes’ lead.

Arizona State knotted the game at four with a three-run fourth inning before driving in four more runs the remainder of the game.

Migueles’ three-run opposite field bomb ignited the bats for Utah, putting the Utes on top 3-0 in the first. Isaac Deveaux sent another run across in the third inning with a single to add to the Utes’ lead. Two innings later, Dunn’s dominance at the plate continued with a single to score Deveaux from second base. Migueles finished off Utah’s day at the plate with a rocket that soared over the center field wall.

Arizona State brought two home in the seventh, and one in the ninth. Joshua Tedeschi and Zac McCleve shut down one of the nation’s best lineups in the Game 3 matchup.

Head coach Bill Kinneberg gets his 600th win of his career against the No. 12 Arizona State Sun Devils 6-3.

After the game, Coach Kinneberg said, “The milestone just means that I’ve been coaching a long time. There’ve been great teams that I’ve had, and some great assistant coaches.” Kinneberg continued, “I thought we played well this weekend. We battled every pitch to get that win today.”

Tedeschi had a fantastic game pitching into the eighth inning, striking out four batters. Dunn and Migueles took the lead offensively for the Utes. Dunn had three hits in five appearances while Migueles had two home runs and four RBI.

On his two-home-run day, Migueles said, “I was up there trying to get a good pitch to hit and put a good swing on it.” Migueles continued, “I feel like we battled well against Arizona State. We were really close in the first two games and it felt like we were just one step away each time. We just want to go out there and be in every ballgame.”