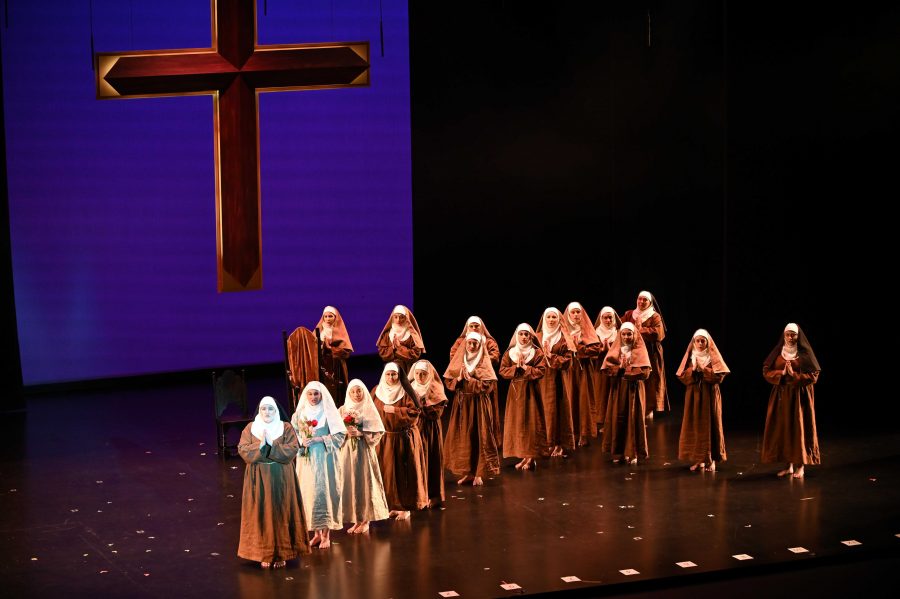 The cast of "Dialogues des Carmelites." Photo by Robert Breault.

“Dialogues des Carmelites” follows heroine Blanche de la Force, a young woman who joins a convent during the Reign of Terror in the French Revolution. As the daughter of the Marquis and a girl filled with a great deal of fear from the riots, Blanche seeks refuge and finds it in the Carmelite convent. The Prioress is wary of Blanche’s decision to become a nun until she hears that Blanche will take the name “Sister Blanche of the Agony of Christ.” Moved by her devotion, she allows Blanche to join them. As the sisters face death and persecution from the revolutionaries, Poulenc’s opera faces the feelings of shame and honor that surround death with the promises of restoration and martyrdom.

As tragic as the show is, ending with the entire chorus of women lying dead on the stage, it was gorgeous to watch. The audience becomes so connected to Blanche as she is tortured by her fears and struggles to overcome her weaknesses. She finds solace in the acceptance of the powerful Rev. Mother, guidance from the grounded Sister Marie, friendship in the bubbly Sister Constance and connection to a body greater than herself.

The show started with an introduction from the opera director Dr. Robert Breault, cut short with a calm interruption from Marie, drawing the audience into the “story of my sisters.”  From then on, the technical direction of the show was gorgeous. Every scene, or tableau, started with a frozen picture in time before the characters were swept up in the story and music. Impressively, Act 3 featured a lengthy slow-motion fight scene, which was executed effectively and pulled the audience even further into the terror of that world. In addition to the big moments, I could pick up on beautifully subtle directing choices, like having the sisters follow certain patterns of movement to end standing in the shape of the cross.

I was blown away by the final scene, where the imprisoned sisters are killed at the guillotine. Starting in a straight line at the front of the stage, they step back one by one through the red glow and each fall with a flash of a spotlight and the sound of a metallic slice. Though ending in tragedy, the visuals contributed to the characters’ redemption — Blanche returned to her sisters’ sides one last time in strength instead of fear, Constance’s dreams came true as she proved herself not naive and the cross that was hung in the back was restored onstage.

Poulenc wrote this opera mostly in recitative, a speaking manner of singing not driven by a beautiful melody but by the text itself. For this reason, a lot of information and dialogue is thrown at the audience, which is especially jarring when the opera is entirely in French. However, the atonal recitative throughout made the glorious harmonic moments of a full women’s chorus in the ends of Acts 2 and 3 even more gorgeous.

One of the best parts about seeing this work performed was the individual strength of each character. These roles are based on, written for and performed by incredibly strong women, no retelling, adaptation or gender-bending required. For the first two acts, there are hardly any men onstage at all — your entire attention is captivated by talented female performers. The show was double-cast for its two performances, but I was blown away by both Mandi Barrus as Marie, as she watches her sisters killed before her eyes, and Elizabeth Peters as Blanche, whose vocal power contributed to the growth of the character.

This story remains relevant today, not only because it surrounds a religious holiday, but because it shares the unheard voices of a devout and loyal sisterhood in the face of one of the most tragic events in history. From the intensity of recitative to the glorious chords, the score lends itself to the intense power of every woman on that stage.