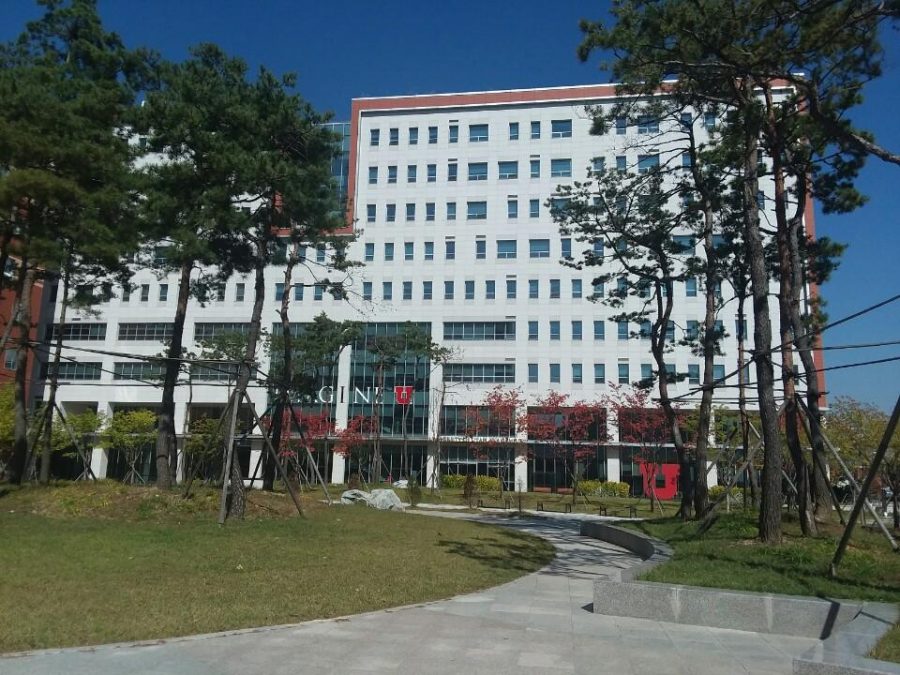 Leadership consultants of the University of Utah Asia Campus hosted the event “Sex Week” from April 22 to April 26.

“Sex Week” is an annual event for students to share their opinions about issues related to sexuality. Leadership consultants hosted a special session at “Cafe U,” the student lounge, from 12 p.m. to 1 p.m. on April 23 for students to gather and discuss abortion.

For the past 66 years, women who have had abortions in South Korea were punished with up to two years in prison. After South Korea’s Constitutional Court ruled on April 11 that prohibiting abortion was unconstitutional, a new law on abortion in South Korea is expected to be enacted. The lawmakers must revise the law by the end of 2020. Of South Korean women aged 15 to 44, 75.4% support allowing women to have a choice about abortion, according to a September 2018 survey by the Korea Institute for Health and Social Affairs.

Hyun-Jeong Park, a leadership consultant major in the Department of Psychology, stated that the Constitutional Court’s decision was right and it can positively affect women’s lives. “We didn’t expect the Constitutional Court’s decision. I am really glad their decision [went] though,” Park said. He also claimed that the public should keep watching what new laws lawmakers will revise in the future. “We also need to respect the opinions of some people who consider abortion illegal for religious reasons. However, women should be allowed to make their own choices and make decisions regarding abortion, and in this sense, the Supreme Court’s decision should be welcomed. I hope the issue will no longer become a sensitive issue.”

“It is good for young college students to know what exactly sex is about for their lives. Some Korean students don’t know about sex issues, so this event is helpful to educate them to know about it,” said Coral Wilkin, a junior majoring in film and media arts. “In America, people are divided into two sides about abortion,” Wilkin also stated. “Some people think women should have a choice about it and others think like abortion is murder and absolutely illegal.”

Wilkin supported South Korea Constitutional Court’s April 11 decision, although she said that we should keep monitoring how lawmakers will revise the law under the Constitutional Court’s decision. “We spoke about this issue on Tuesday, and I am curious to see a new law about abortion in Korea. I hope women are not being punished due to abortion by a new law,” Wilkin said.

Sahaara Monserrath Pena, a junior majoring in communication, said that the event was meaningful for students who have a Korean background. “It was good that the young Korean students [were] involved in the event and shared their thoughts about abortion and sex,” Pena said. Students who have been educated in Korean society mostly agreed that it is hard for them to talk about sex issues due to Korean culture. Nowadays, the Ministry of Education in the Korean government is trying to provide more support for schools to have various programs and lectures that educate students about sex issues. Sex, however, is still a controversial topic for most Koreans, and many consider it too sensitive to talk openly or disclose their personal opinions.

Leadership consultants who hosted the event turned the second-floor hallway of UAC into a “sexhibition hall” all week and hosted various events each day. On April 24, they hosted the program “Condom Relay Race” from 6 p.m. to 7:30 p.m. in the UAC lobby. They also presented two programs, “Consent Presentation” and “Resources for Survivors,” on April 25. The last program of “Sex Week” was “Let’s Talk about Sex Q&A.”

As the Constitutional Court ruled that banning abortion is unconstitutional, many students at UAC hope that abortion will no longer be a sensitive issue to talk about in South Korea.