Watch Out for This Fierce Freshman: Gymnast Adrienne Randall is Fire on Floor and Beam 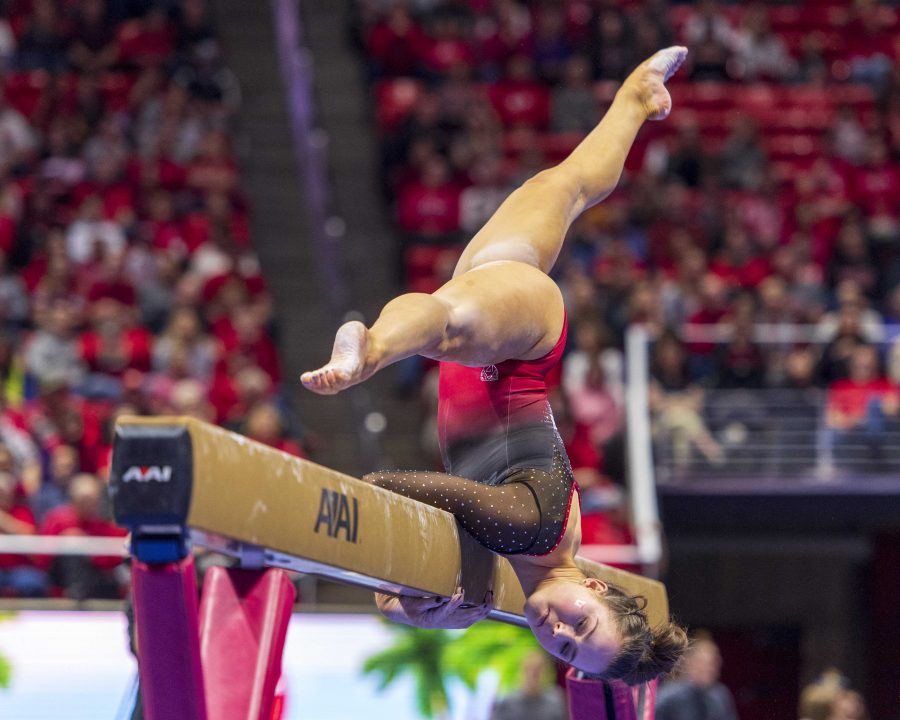 University of Utah Red Rock Gymnast Adrienne Randall, who hails from Corona, California, is in her first year at the U and has already started making an impact on the team. During the first week of competition this year, she was already in the beam line up. While she started at the second spot, by the second week of competition she had made her way to the fifth spot in the line up. As the lineups solidified, she moved to the fourth spot, and that is where she has been ever since.

Before her time at Utah, Randall, like other girls on the team, was a member of the Junior Olympic team. In 2017, Randall won the national title for the beam, and in 2018 she got second place on the same event.

During the second week of competition, she had entered the floor line up as well. Between 2014-2015, she was a state champion on the event. In 2016, during her time at the Junior Olympics, she tied for second place at the national competition.

Red Rocks co-head coach Megan Marsden said that from the day that Randall stepped foot into the Dumke Gymnastics Center, she was ready to go on those two events.

“She was so absolute on being on floor and beam, that she’s not early in the line up. She put herself immediately in the back of the line up just by the way she does her routines,” Marsden said. 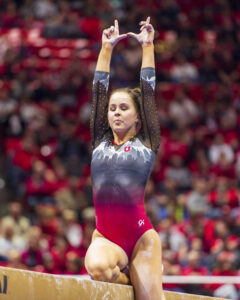 From a young age, Randall was told that she would fit perfectly into the Utah team and what they do as a program.

“I had a coach that went here, Meredith [Paulicivic], that coached here for a while and she had always [said], ‘Oh yeah I see you at Utah,’ when I was really young,” Randall said. “So I was just like, ‘I don’t really know what college is, I’m only in fifth grade.’”

It was co-head coach Tom Farden who found Randall and tried to make Paulicivic’s prediction come to fruition.

“He liked her work ethic and her will to win,” Marsden said. “Personality wise, she is very quiet and withdrawn, but somewhere inside there is a pretty fierce competitor going on, and I think he was drawn to some of those characteristics.”

Pressure doesn’t seem to be a problem when it comes to Randall. Randall was a part of the 2017 Junior Olympic National team and uses lessons she learned during that time to help her in tough situations.

“I feel like throughout the last few years I’ve put in so many similar routines, so I know what pressure situations feel like,” Randall said. “I know I’ve put in the work, and I know that it will help me.”

The Jon M. Huntsman Center can be daunting at capacity for an incoming freshman. Randall had never performed in front of a group so large, but she took it in stride.

“It was really crazy,” Randall said. “I’ve never been in front of a crowd that big before, so landing something and hearing everybody yell and clap was so great, and it was an amazing feeling.”

The Utah gymnastics program tries to make sure that the freshman on the team are taken care of when beginning school. The team came up with a program called the “Big Sister Program,” which pairs an upper class gymnast with a freshman. Randall’s “big sister” is Shannon McNatt.

“She’s always there for me if I have any questions,” Randall said of McNatt. “If I need extra words of encouragement, she’s always there to help push me. She gives me her personal experiences and how I can relate them to myself. She helps me to see things from another perspective.”

Marsden says that the purpose of pairing Randall with McNatt was because they share similar personality traits.

“It took Shannon a year or two to begin to open up, and we thought possibly Shannon could help explain to her, sooner, rather than later, you should begin to enjoy this, and be yourself and open up,” Marsden said.

Even though she is only on two events right now, Marsden sees her as a potential all-around competitor for the team. While she is close to making her way in the bars lineup, her vaulting is the place for improvement.

“I’m hopeful she doesn’t end up this incredible three-event person,” Marsden said. “I’m hopeful that she continues to work on things in the off season to improve her technique on [vault] so that hopefully she can be a viable option and ultimately a really good option on all the events.”

Next time you are at the Huntsman Center and they call out Randall’s name, be prepared for an eruption from the crowd. After all, her routines are anything but quiet.