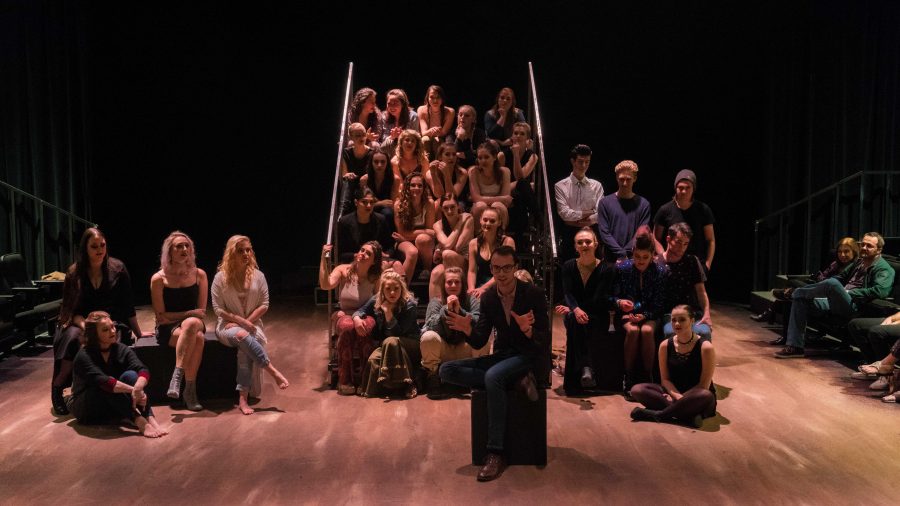 (Courtesy of the University of Utah Theatre Department)

The University of Utah Theatre Department does not shy away from controversy. In November, the play “Big Love” featured onstage nudity, explicit sexual content and graphic violence. Many members of The Church of Jesus Christ of Latter-day Saints disavow media with profanity or strong sexual content. Within the department, students and professors must decide how to proceed in a culture still heavily influenced by the church’s presence.

Denny Berry joined the U in 2012 as the head of the Musical Theatre Program. A self-described “card-carrying atheist,” Berry said, “I have a particular chip on my shoulder about the kind of exclusions, the kind of prejudice [and] the kind of judgmental ways” the church has about certain issues, including sexuality.

During her first year at the U, Berry experienced pushback for a production of “Spring Awakening.” This musical, written by Duncan Sheik and Steven Slater, frankly depicts teenage sexuality, a topic which may offend some Latter-day Saint audiences. Berry, who called the show “tremendously appropriate to this particular community,” found it ironic that the criticism from audience members mirrored the content in the show.

Berry realizes that her choice of content might alienate certain audience members. Still, she does not believe the religious climate in Utah makes her job more difficult. Berry does not shy away from vigorous debate. She said some students object to content they are asked to perform. In these cases, she makes accommodations, but she asserts that material should not be censored. Berry balks at the idea that she should cater the program to any particular religious tradition. If students want shows that adhere to church standards, Berry advises — “They should go to BYU.”

From BYU to the U

Robert Nelson is the current head of the Theatre Studies program. He was born and raised in the church and is still an active member.

Nelson feels that the department is welcoming to students of all religious backgrounds, including members of the church. Nelson, who received his Ph.D. from the U, feels the department has grown more welcoming since his time as a graduate student.

Nelson is not “intimately involved in the season selection committee,” and recognizes that many of the plays could be off-putting to some audiences. “We seem not to worry so much about building an audience. I think that’s short-sighted, but I understand that working too consciously toward building an audience can compromise the quality of the work we do,” Nelson said.

The U’s position as a public university causes debate over the theatre department’s role. Some argue that the department should be sensitive to the needs of students and audience members while others maintain that religion should play no role in the department.

Nelson offers a measured response to this discussion. He says, “I think we have the obligation to be more broadly rather than narrowly aware of our audiences. Our potential audience may be majority LDS.” However, he bemoans that some theatre in Utah is “not particularly challenging, intellectually or in terms of religious values.”

Nelson believes there is room for productions that appeal to a wider audience. He would welcome more family-friendly material and shows that could attract a broad environment. At BYU, the productions were more popular with the general public, but Nelson remarked, “I didn’t feel particularly comfortable with the narrowly limited choice we could make for productions to mount.”

Many view BYU and the U as cultural opposites, but Nelson has genuinely enjoyed his time at both institutions. At BYU, he enjoyed working with the students and challenging students to cover a wide array of topics. At the U, he said “certainly there is some material that we do on stage that surprises me … I feel as if to some degree I’m growing along with my students. And perhaps that’s a good thing.”

Students are also conscious of religious issues. Three musical theatre students from diverse religious backgrounds all expressed similar experiences in the theatre department. Rachel Malaga was raised Jewish and is an active member of Hillel Utah, a Jewish student organization on campus. Lauren Nesser is a Latter-day Saint. Fynn White was raised with no religious tradition and considers himself agnostic.

Malaga and Nesser, who are from out of state, noticed that religion plays a unique role in the campus community. Malaga felt “culture shock” after moving to Utah from her hometown of Randolph, New Jersey, which had a larger Jewish population. Nesser noticed that religious issues were more prominent at the U: “It seems to be the first topic of conversation when you’re with people.”

Despite their differing backgrounds, all three students expressed similar viewpoints and experiences within the theatre department. None of the students felt or had seen others be offended or uncomfortable with their content.

Malaga, Nesser and White believed that religion should not be a major factor in choosing productions. “I would personally rather challenge someone’s beliefs. I think that is what theatre is supposed to do,” Malaga said. Nesser agreed: “I have always been in the mindset that we shouldn’t censor art … Audiences need to make the decision for themselves whether or not they want to consume that content.” White felt that shows should be “an educational environment for the student.”

Though both Malaga and Nesser support the secular environment in the theatre department, their religious backgrounds still inform their experiences. “I have this really strong community behind me at church,” said Nesser. Malaga used her identity to help her understand new characters: “[Being Jewish] has given me experience in not being the majority. Some people never know what that feels like.”