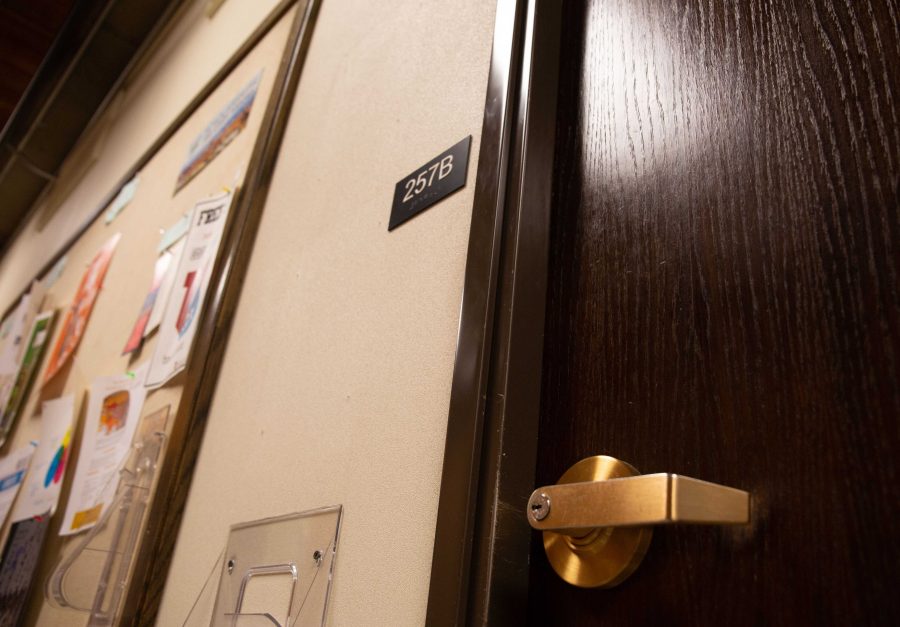 According to the University of Utah's campus directory, Sterling Van Wagenen's office was 257B in the Art Building prior to his resignation. (Photo by Emily Anderson | The Daily Utah Chronicle)

Former University of Utah film professor Sterling Van Wagenen pleaded guilty in an initial Utah County court appearance on Tuesday to a count of the sexual abuse of a child. Van Wagenen’s attorney stated that he will also plead guilty later this week in a Salt Lake County court to a second charge of the same crime. The pleas come as part of a deal with prosecutors in the two counties. Under the agreement, he will serve a prison sentence of six years to life.

Van Wagenen was a noted filmmaker in Utah, known for co-founding of the Sundance Institute and Sundance Film Festival, although he has not been associated with the Sundance organization since 1993. He is a member of The Church of Jesus Christ of Latter-day Saints and has worked on several religious films for the church, including some instructional video material which has been shown in the church’s temples.

Court documents state that Van Wagenen inappropriately touched a female relative twice between 2013 and 2015. She was between the ages of 7 and 9 years old. The documents allege the first incident happened at the victim’s home in Salt Lake County. He reached under her clothing and “rubbed” her genitals while she sat on Van Wagenen’s lap. On a separate occasion at Van Wagenen’s Utah County home, he touched her genitals again.

The court documents allege that he later told the girl that he touched his wife similarly and asked her if the touching made her uncomfortable. She said yes. Van Wagenen allegedly told her that it wouldn’t happen again.

The charges and plea come after the Feb. 4 release of a recording in which Van Wagenen admitted to molesting a minor in 1993 but claimed never to have touched another child. That recording was released by the Truth and Transparency Foundation — the non-profit behind MormonLeaks, a website which releases leaks by whistleblowers within the Church of Jesus Christ.

1993 was the same year Van Wagenen left the Sundance Institute and joined Brigham Young University as an adjunct film professor.

Van Wagenen resigned from his position as a film professor at the U on Feb. 15, following the release of the recording. The school had placed him on administrative leave on Feb. 5.

In the recording, victim “David” (a pseudonym) confronted Van Wagenen about the incident. In an interview with the New York Times, David has since spoken publicly under his own name — Sean Escobar.

Escobar says that when he was between the ages of 10 and 13, he slept at Van Wagenen’s home at a sleepover with Van Wagenen’s son. During the night, Van Wagenen touched Escobar beneath his clothing — first on the abdomen and then several times on his genitals. In the recording, Van Wagenen acknowledges the incident and apologizes for it. He also confirmed this to ABC4.

Van Wagenen told Escobar in the recording that depression caused him to “act out” sexually with males, females and prostitutes. However, he claimed to never have abused other minors.

He told Escobar, “After this happened with you, I was just horrified at what I had done. I’ve always been cautious about it. I’ve probably been cautious with my own kids and cautious with my grandkids because I just don’t want anything like that to happen again.” Van Wagenen continued, “But would I consider myself a pedophile? I’ve never thought of myself in that way.”

Van Wagenen mentioned in the recording that he reported his assault of Escobar to the police, his stake president — a local ecclesiastical leader in the church — and to his therapist. No criminal charges were pursued, but he was disfellowshipped from the church as a result of the incident.

In the Church of Jesus Christ, disfellowshipment is used as a consequence for the commission of what the religion views as serious sins. It falls just short of excommunication.

According to the church’s website, “Someone who has been disfellowshipped is still a member of the church, and they are encouraged to attend meetings, though in those settings they are not permitted to pray, teach, take the sacrament, attend the temple or give sermons in public settings.” Men are also prohibited from performing priesthood duties, such as giving religious blessings.

In response to the charges against Van Wagenen, Church of Jesus Christ spokesperson Eric Hawkins stated last month, “Until recently, the church was unaware of any of the behaviors alleged in recent criminal proceedings and reported the matter to authorities as soon as it learned.”

Hawkins didn’t answer questions about whether Van Wagenen had been working on any film projects for the church recently and about what standards the church expects individuals to live while working on projects involving religious rituals that it views as sacred. According to the Truth and Transparency Foundation, the films that Van Wagenen had produced for temple rituals, which were implemented in 2013, coincide with the time frame during which he allegedly abused his young female relative.

Citing individual privacy, Hawkins said that the church does not provide information on the specific cases of disciplinary actions or proceedings of its members.

Hawkins did comment on sexual abuse in general, saying, “Jesus Christ taught that the abuse of a child is among the most serious of sins. It was not tolerated by Him, and cannot be tolerated in His church today. Members of The Church of Jesus Christ of Latter-day Saints are taught to live high standards of personal morality. Anyone who seriously violates those standards must be accountable for their actions, both in relation to the laws of God and man. As it relates to the church, this may include formal discipline, including a possible loss of church membership.”

Hawkins concluded, “Our hearts ache for victims of abuse, and the church is committed to addressing incidents of abuse wherever they are found. We continue to ask members and leaders to surround those harmed by such tragic situations with love, help and the hope available through Jesus Christ.”

Police reports confirm that Van Wagenen reported himself to the police. The documents say that charges were never filed because Escobar’s parents decided not to go through with them. In an email to the New York Times, they said that they were trying to protect Escobar from exposure in the news and the stress that comes with court trials.

Though Van Wagenen told Escobar he had never abused another child, Escobar says he came forward with the recording at least in part because he feared that Van Wagenen might have more victims. In February, he told the Truth and Transparency Foundation that, if there were other victims, he hoped they would feel encouraged to come forward as well. Escobar told the New York Times that the release of the recording did just that.

According to court documents, Van Wagenen’s next court appearance is May 2 in West Jordan’s Third District Court.