The Daily Utah Chronicle • May 6, 2019 • https://dailyutahchronicle.com/2019/05/06/brown-byu-nepotism-and-university-of-utah-bias-in-utahs-top-tech-companies/ 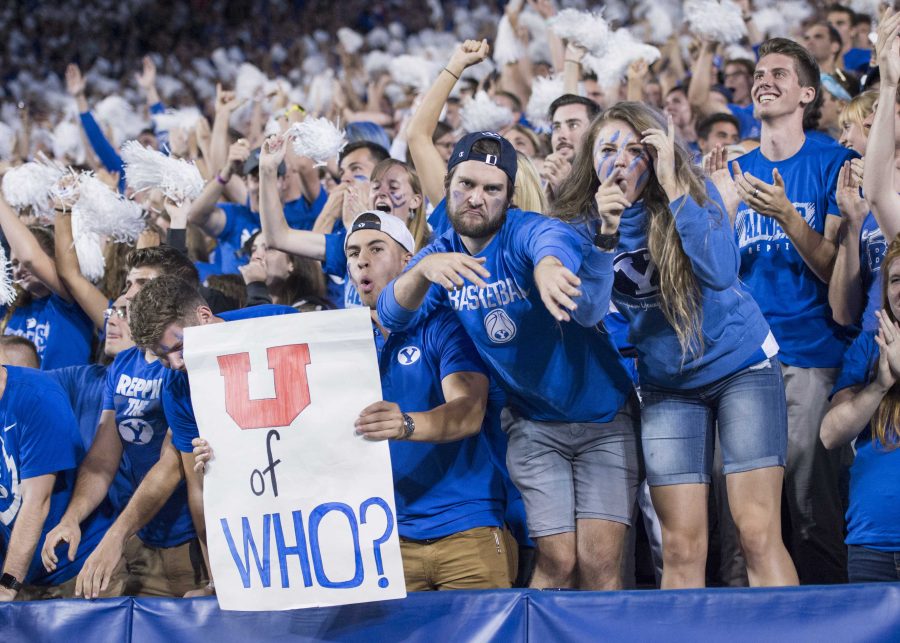 BYU students celebrate after a BYU touchdown vs. The University of Utah Utes in an NCAA football game at LaVell Edwards Stadium in Provo, Utah on Saturday, Sept. 9, 2017 (Photo by Kiffer Creveling | The Daily Utah Chronicle)

It is no secret that the student cultures of the University of Utah and Brigham Young University are at odds with one another. A commonly held sentiment at BYU is the belief that the U is a second-rate academic option for students who are morally unworthy or intellectually incapable of attending BYU. On the other hand, many at the U see BYU as an ideologically monochromatic, rigid and repressive institution which churns out “drones” for The Church of Jesus Christ of Latter-day Saints. Regardless of whether or not either sentiment holds any truth, BYU holds a societal authority over the U through the use of its cultural status as the “divine university.” While prejudicial sentiments shape how these two groups perceive each other, the positions of power that BYU alumni hold in Utah adds larger cultural significance to the rivalry between the two schools.

The origin stories of the U and BYU begin with one man — Brigham Young, the second prophet of the church. The U, originally named The University of Deseret, was established in 1850 as a state-run university. BYU, established in 1875, was to be a privately held institution run by the church. Over the 19th century, a rivalry would form between the two universities that was both intercollegiate and ideological. While the demographics of both universities were mostly members of the Church of Jesus Christ, a partition began to emerge, distinguishing the two sister schools into ideological buckets by the Vietnam War. The roots of this historical divergence are intensely detailed in Tracey Smith’s USU post-graduate thesis entitled “Agitators in the Land of Zion: The Anti-Vietnam War Movements at Brigham Young University, University of Utah, and Utah State University.”

During the Civil Rights movement, the U began to transform into a radical, liberal institution with a sizeable and vocal anti-war student activist movement. Following the deaths of unarmed anti-war protesters at Kent State in 1970, U student activists called for a university-wide strike, with over 400 students participating in what would be known as the “Park Building sit-in.” Behind the sit-in was an anti-war group known as the U’s April Committee. The Daily Utah Chronicle later coined this group as “our local New Leftist Organization” and it would become a progenitor of future student groups at the U. Though conflict was often present between U leadership and the student-led movement, this student group was tolerated. Peaceful protests were allowed and the freedom of speech was upheld. James C. Fletcher, then-president of the U, responded to mounting pressure against the student activists addressed the university’s role and said, “The fundamental concern of a university is learning … the second factor of primary concern is free and objective inquiry for both students and faculty.”

Meanwhile, at BYU, President Ernest L. Wilkinson held no such tolerance for the liberal students on his campus. Wilkinson began an intrusive campaign during his tenure to squash any anti-war sentiment held by the student body or faculty. He officially enforced the now-infamous men’s grooming and dress code rules to target hippies and liberals. In 1965, Wilkinson created a spy ring which carried out surveillance on faculty members whom he believed to be teaching “false doctrine” or sympathy for communism. Dr. Ray Hillam, a professor in the political science department who was described by Wilkinson as “a political extremist; off the chart politically,” experienced what he called “subtle threats” from Wilkinson. Wilkinson’s administration also targeted known anti-war activist students with intrusive investigations to sniff out “Word of Wisdom” (drug and alcohol) violations and any other damning information to leverage the students into submission. William A. Wilson, a BYU English professor at the time, labeled these techniques as “McCarthy tactics” and was “distressed about what was happening to students.”

Utah’s Perceptions of the U

Both institutions act as a microcosm for the current state of Utah politics. While BYU’s liberal movements have been consistently restrained, students at the U have fostered increasingly progressive ideas over the years. This dichotomy between the U and BYU has created a palpable rivalry. The rivalry has become so toxic that both universities’ athletic departments had to issue a statement before the 2018 Holy War game for fans of both teams to be respectful of each other, citing safety concerns. In the Deseret News article, “Is rivalry healthy or harmful?” sports journalist Jeff Call says the rivalry contains a “church vs. state undertone” and that the rivalry “pits neighbor against neighbor, father against son, brother against brother.” Brawls have erupted at Holy War games, famous campus statues have been vandalized and snowballs have been thrown at players. In 1993, U players tried to raze BYU’s goal post after the U defeated BYU for the first time in Provo in 22 years. Lenny Gomes, then-defensive lineman for BYU, later infamously remarked, “All those Utes think that’s all there is to life, but when I’m making $50,000 to $60,000 a year, they’ll be pumping my gas … They’re low-class losers.”

In Utah, BYU is the school that many Latter-day Saint families desire their child to attend. What better education could there be than the one administered by God’s true church? The U is often dismissed as a “pagan” state-run university, where those who get rejected by BYU admissions go to practice sin and participate in inferior academics. The top Urban Dictionary definition — with 512 upvotes and 379 downvotes — defines the U as, “A taxpayer-supported university located in Salt Lake City for people who: A. don’t have the grades or the test scores to get into BYU/B. want to major in smoking pot, getting laid, [self-pleasuring], drinking beer, or journalism/C. want to study Marxism/D. are non-Mormon or Jack Mormon.” Though Urban Dictionary’s definitions are of more a satirical lens to the view the world by rather than a factual one, it identifies the bias that exists.

BYU and the U Side By Side

There is no denying that BYU academics are held in relatively high regard nationally. According to U.S. News, its undergraduate rankings for 2019 include No. 66 in National Universities, No. 2 in Accounting and No. 11 in Best Values Schools. Its graduate school programs rank No. 4 in Accounting, No. 16 in Local Government Management, No. 29 in Public Management and Leadership, No. 32 in Best Business Schools and No. 39 in Best Law Schools. Forbes ranks BYU as No. 86 in Top Universities, No. 67 in Private Colleges and No. 3 in America’s Best Value Colleges. The U — while ranked lower than BYU in undergraduate terms — has made huge strides in terms of academic development. U.S. News ranks the U at No. 119 in National Universities, No. 56 in Top Public Schools and No. 59 in Best Undergraduate Engineering Programs. The U also definitively outperforms BYU is in graduate school rankings. U.S. News ranks the U graduate programs as No. 18 in Organic Chemistry, No. 21 in the Primary Care Programs, No. 21 in Nursing Doctorate Programs, No. 30 in Nursing Masters Programs, No. 32 in Chemistry, No. 34 in Mathematics, No. 38 in Medical Research Programs, No. 43 in Computer Science and No. 55 in Best Engineering Schools. Forbes ranks it No. 28 Best Employers for Diversity, No. 212 Top Colleges, No. 68 Public Colleges and No. 46 in America’s Best Value Colleges.

Some hold these rankings up as inexplicable truths of the varying inferiority or superiority of either university. University ranking systems may be an ill-equipped means of measuring academic value, however. U.S. News has been heavily criticized for its highly subjective factors in its ranking system. For example, 22.5 to 25% of the rankings comes from “peer assessments,” meaning they send questionnaires to selected faculty members at each university and have them rank each accredited university. The U.S. News ranking system is also plagued with issues such as constantly changing the ranking system from year to year, leading to the inconsistency of meaning, universities gaming the system and little accounting for quality of education or outcomes. Clustering is also another issue with rankings since a university ranked nationally at No. 40 could be about the same quality of education as a university ranked nationally at No. 80. University rankings may be little more than tools university marketing departments use to display their subjective prestige.

The Workforce and U

There are roughly 180,000 BYU alumni and 140,000 U alumni on LinkedIn. Of these, 95,000 BYU alumni and 88,000 U alumni live in the Salt Lake City or Provo area. If we take the proportion of the number of BYU and U alumni that work at various top technology companies, we get a striking result. The results imply that many of Utah’s largest companies have a disproportionate amount of BYU alumni in their workforce. For example, Vivint Smart Home Company has 164 U employees and 514 BYU employees, meaning over 70% of the employees at Vivint with LinkedIn profiles are BYU alumni. Indeed, many of Utah’s top technology companies have more BYU employees according to LinkedIn — Adobe at 70%, Qualtrics at 81%, Domo Inc. at 74%, Lucid at 68%, Podium at 69%, Ancestry at 75% and Entrata at 80%. These percentages even account for the greater number of BYU LinkedIn profiles by weighting the proportions accordingly.

Many factors could account for this disparity in employment at these companies. First, LinkedIn is not an explicit way to get employment statistics. I would argue that LinkedIn is widely adopted and that keeping one’s LinkedIn profile up to date is necessary, making the data a good random sample of employees at a particular company. Second, the locality of a lot of these businesses are in the Provo, Draper and Lehi area — 58% of U alumni live in Salt Lake City while 85% of BYU alumni live in Provo. I would argue that Provo and Lehi are not a burdensome commute when weighed against the opportunity to have a career at a top technology company. Third, perhaps the level of education at BYU is so high that employers to prefer to hire their graduates because they statistically outperform U graduates. I would argue that a U alum who doesn’t serve an LDS mission will have two years more of professional work experience over a BYU alum who instead served a mission. If both students were of equal age, then the U graduate would be the more desirable candidate.

A more insidious conclusion could be drawn for the disparity of employment at preeminent top technology companies. Six of the eight founders of the previously mentioned companies were founded by BYU alumni. This predominantly BYU-dominated management could develop into a BYU-dominated work environment. More importantly, the prejudicial assumptions about a U alum could affect a BYU-dominate company’s hiring practices. Would you vouch for a prospective employee from the U over a prospective employee from BYU if your entire network is dominated by BYU alumni? Do companies see the U as a negative mark over a BYU graduate at these universities due to the cultural bias related to the U in Latter-day Saint culture? If I had to guess, every time an employer asks if you went on a mission or “why you choose the U over BYU,” these questions aren’t harmless. They are indicative of a culture in which academic nepotism and bias will influence our career outcomes as U graduates.

This article has been updated for AP Style, as well as to clarify the LinkedIn statistics.