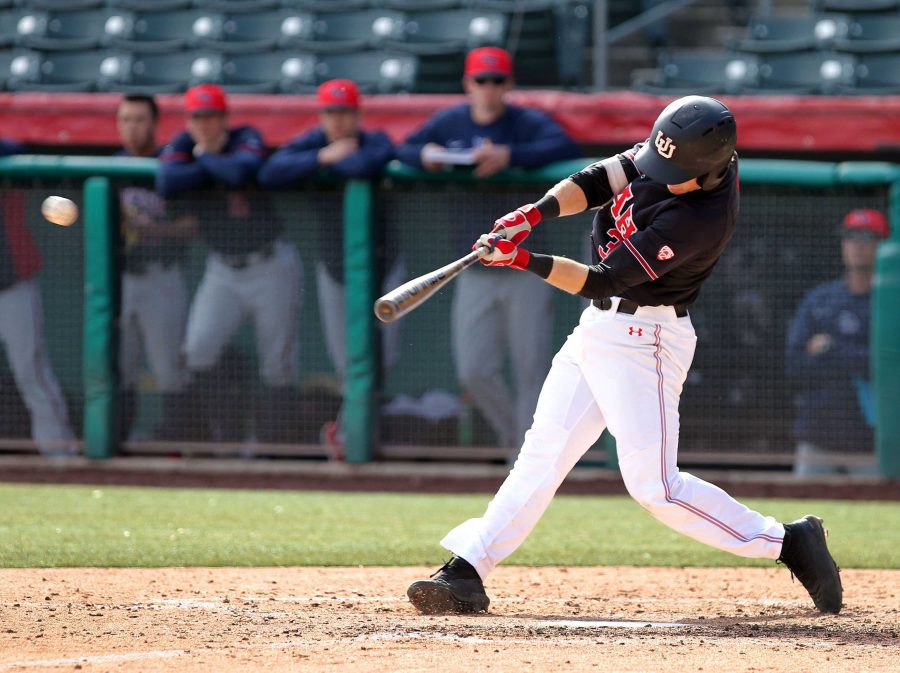 The University of Utah baseball team has had a rising star the past three seasons in Oliver Dunn. Throughout his time as a staple in the Utah infield, Dunn has been an unbelievable defensive force, having one of the most consistent bats in the lineup. This Utah baseball player has a lot to look forward to but enjoys taking life one step at a time.

Dunn grew up playing baseball and dreaming of one day making it to the Majors. Although he isn’t a die-hard fan of any particular team, Dunn does find himself cheering on the Braves. He likes to follow MLB players and tries to model his game after some of his favorites.

“I always have had favorite players I like watching. Over the last few years, it’s been Mike Trout. I mean, he’s the best player on the planet,” Dunn said. “I also like watching Scooter Gennett on the Reds and Whit Marrifield on the Royals. There are a couple other guys who I play similar to that I try to watch as much as I can.”

Trout, Gennett and Marrifield are not only solid players defensively, but they also are leaders at the plate for their team and across the league. Dunn has also found success offensively this season, usually batting towards the top of the lineup. This year, Dunn has led the team in runs scored, walks, hits, doubles and triples. He is also currently on an 18-game hitting streak.

“For me, a lot of it is mental. I’m just trying to stay focused and stay in my routines. I approach the game the same way every day no matter who we are facing or what the score is. My goal is to stay consistent with how I approach the at-bat,” Dunn said.

Head Coach Bill Kinneberg also chimed in on Dunn’s success at the plate. “He’s always had the ability to swing the bat well. His bat and his running ability make him a dangerous offensive guy for us,” Kinneberg said. “Oliver’s hitting for power and bunting for a base hit, so he’s a multi-dimensional hitter, so that makes him very effective as well.”

Something that may surprise a lot of people is that Dunn didn’t originally commit to the University of Utah out of high school. As a sophomore at Cottonwood High, Dunn was offered a scholarship and committed to play at Seattle University.

Dunn was loyal to his commitment for about a year before looking at other options. After attending camps and tournaments where he received recognition from other schools, Dunn decided to stay close to home.

Although getting to play in college was a great step for Dunn, this wasn’t his end goal. Coach Kinneberg talked about Dunn’s work ethic and the improvements he has made since joining the team.

“When Oliver came in as a high school athlete, we knew he had a chance to be a good baseball player,” Kinneberg said. “He’s started every game in his career, so you put that together with his work ethic and he’s had a great three years here. We’re looking forward to watching these next 25 games or so to watch him continue to improve.”

Throughout this season, Dunn’s name has begun to appear on draft boards for Major League Baseball teams. With great humility, and a determined drive to put the team first, Dunn won’t be caught focusing on the draft. Instead, Dunn is focusing on helping the Utes get back to their winning ways.

“I try not to think about [the draft] too much because right now we’ve got bigger things to worry about. Right now were trying to turn things around and get back in the win column,” Dunn said. “[Playing Major League Baseball] is something I’ve always wanted to do. It’s definitely something I’ve thought about before, but I try to keep it off my mind while we’re playing. If it happens, it happens, so we’ll see.”

Outside of baseball, Dunn can be found hanging out with his family and friends. He also loves watching movies and going hunting. When asked what his favorite baseball movie was, Dunn said, “I love the movie ‘Summer Catch.’ I was able to play in the Cape Cod League this summer, so it was cool to see all the little towns in the movie and how the summer leagues work. Obviously another favorite is the classic ‘Sandlot.’”

Be sure to catch Dunn and the rest of the Utah baseball team at Smith’s Ballpark this season.