LVL UP EXPO 2019 Has Something For Every Kind of Nerd 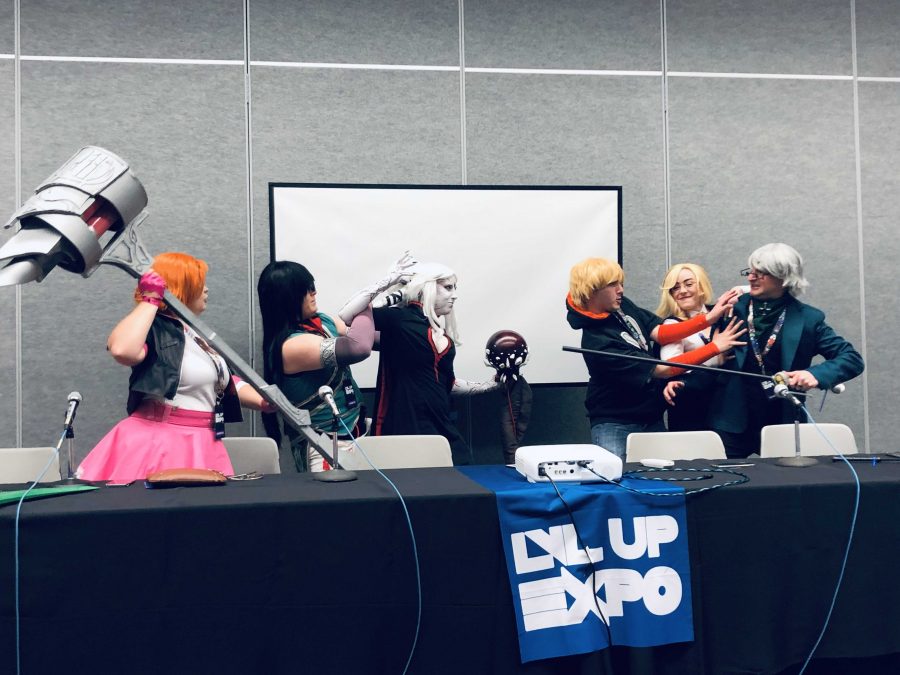 From gaming enthusiasts, anime geeks and comic book lovers to other branches within nerd culture, thousands come to mingle at the LVL UP EXPO (pronounced ‘level up expo’) convention. This three-day event offered far more to do and see this year than that of any other convention like it so far. The event took place from April 26-28 at the Las Vegas Convention Center. The expo is something that those in the gaming world — especially those in the University of Utah’s Entertainment Arts and Engineering (E.A.E.) program — need to visit at least once to be exposed to all the technologies, networking, new ideas and to seeing what’s going on outside of the state of Utah. The expo featured retro gaming and indie developers, new releases to try, a plethora of gaming tournaments, live gaming streams, hoards of cosplayers, contests, guests, panels, podcasts, karaoke, an array of interesting merchandise and there were even wrestling matches. To put it shortly, there was something there for every type of nerd.

LVL UP is a non-profit organization established in 2012 by Vegas natives Colten Pipkin and Lauren Arancibia. It evolved from a two-day festival garnering anywhere between 1000 visitors to tens of thousands this year. They sought to harness one of the largest gaming gatherings annually by focusing on diversity and love for gaming, technology, design, art and anime, blending the old with the new in an interactive environment. Each year, their challenge is to keep “leveling up” what they bring to the community. With so much offered at the expo already, it seems they won’t stop. The environment breeds an atmosphere of engagement and excitement that’s nearly stress-free.

On Friday, the building opened later than the other days. Some of the early arrivers or those that parked outside the gates on the residential streets parked for free. Parking prices and Uber/Lyft rides from hotels nearby were affordable. As annoying as the parking and ticket lines were, they were less chaotic than that of Salt Lake City’s Fan X parking disarray.

The days were mostly clear, dry and hot. Though the interior of the building was cool even with all the bodies moving about, the lights beaming down and the high electronic use. Stepping inside through one of four parallel lines that wrapped around the building was a relief for attendees. The entryway was broken into a permanent food court to the right, tables handing out passes next to the main room doors, a very long staircase conveniently alongside an escalator, and a large lobby area with individuals resting or fixing costumes and body paint.

At the top of the stairs to the second floor, they were holding voice acting auditions for the competition on the last day. Participants were yelling and grunting into a microphone while swinging their arms as they did their best to match the muted anime on screen. Just beyond them were three long halls with rooms for panels happening almost every hour for all three days. A couple of the largest panels were “Meet the voices of RWBY” — a very popular anime produced by Rooster Teeth — and “Meeting the legends of horror” which featured the actors from famous movies in the genre such as “Tales of the Crypt,” “Gremlins” and “Scream.” People could also meet the voice actors from “Dragon Ball Z,” “Super Mario” and the epic duo Chris Sabat and Eric Vale who voice some of the most iconic anime characters in the industry such as “My Hero Academia,” the “Dragonball” series and “One Piece.” Other panels included topics on success in Twitch streaming, “Writing for Comics,” podcasting, anime fandoms and more. Contests also included cosplay, Pokéball making, stand-up comedy, K-pop dance-offs, cosplay lip-sync dance battles and so on. Workshops were held to help those with getting into cosplay and voice acting.

The main room of the venue opened up to the vendor floor and artist alley: a sea of booths perfectly placed to entice sales. Merchandise ranged from local to out-of-state artists of all sorts, from traditional and digital prints and paintings to 3-D models and sculptures. Others offered weaponry, costumes, figurines, apparel, massage chairs and devices, high-end bedding and mattresses. Even though this part of the convention was jam-packed, it still felt strangely organized. To top it off, the prices were very reasonable — not just on merchandise, but almost everything at the convention. Once you walk in the door, all participation in the events were free.

Many vendors had activities with interactive components, including Microsoft’s displays of Surface tablets for use and T-Mobile’s places to sit and charge your phone. Special guests ranged from voice actors such as those from “RWBY” and other aforementioned celebrities to cosplay judges, comic book artist Dan Mendoza, pro esports player Miccoy, to an unexpected few of YouTube and Twitch stream celebrities like D Piddy, Katcontii, LucyMae, as well as game tournament casters Eevisu and TK Breezy. 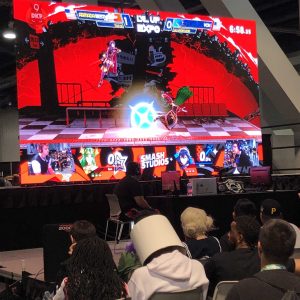 Indie Games Devs featured Desert Pines Animation, SkyReach Studio, Game Wave Studios, Hero’s Legend Studio, Indie Hall/Shedonksdonk, Scorched Edge Animation and the list goes on. This would be perfect for those from the U’s E.A.E. program focusing on Indie game development or going through the capstone class to make some connections and just see what’s available.

Next to this, there was an actual wrestling ring with seating, a live screen and an announcer. The console stage on the forward right and the PC stage to the left of the room all had a live screen for viewers and some live streaming, all with seating and an engaged audience. The main floor contained arcades, an escape room, drones and robots, ax throwing with the Axe Monkey’s and Caster’s Deck gameplay and information.

Throughout the building, you could see and take pictures of/with many cosplayers with different levels of experience. A couple’s cosplay team — Him and I Cosplayers — displayed a wonderful Bethesda’s Fallout power armor suits, one being a possible T-51 Nuka-Cola series. There was also an interesting group cosplaying a mix of Nintendo characters with a random Velma from “Scooby-Doo.”

After the expo on Saturday, they had a Red Bull-sponsored LVL UP EXPO Official After Party for those over 18 years of age which offered free shuttle service to designated locations and free entry with a complimentary drink for the first 250 guests.

Overall, the entire event was worth the semi-long trip to Las Vegas right after the last day of school. The experience and exposure definitely opened my eyes as an E.A.E. student, as well as one who’s involved with cosplay, art, podcasting and streaming. The nerd culture is truly alive and growing, as this event showcases. Expos like these welcome nerds from all walks of nerdom. LVL Up did a spectacular job this year and it will be great to see what additions they bring on in events to come.