The Daily Utah Chronicle • May 10, 2019 • https://dailyutahchronicle.com/2019/05/10/religion-on-campus-more-diverse-than-rest-of-state-with-proportion-of-latter-day-saints-over-15-lower/

Religion on Campus More Diverse Than Rest of State, With Proportion of Latter-day Saints Over 15% Lower 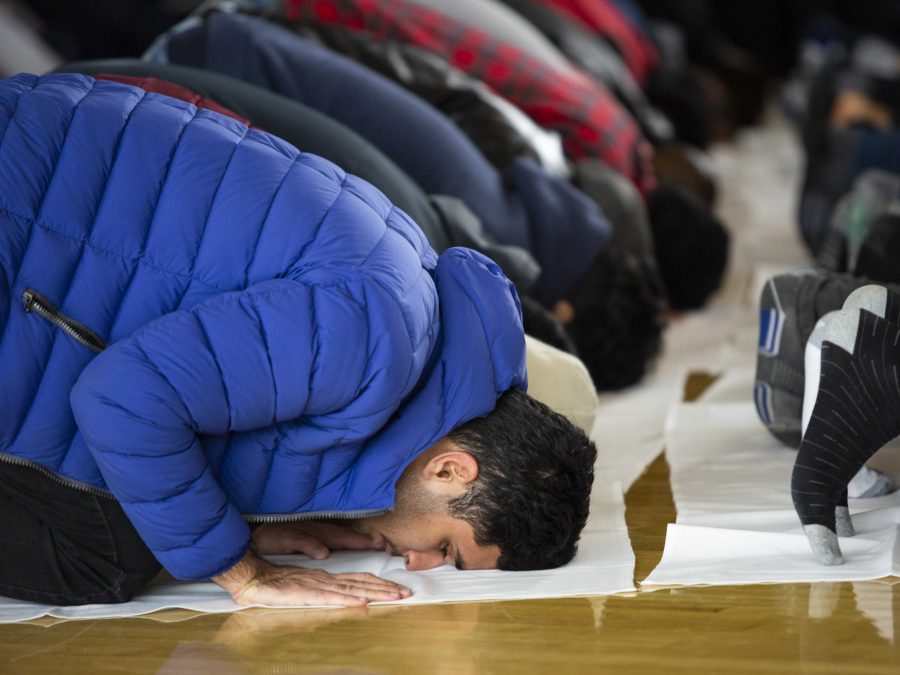 The Muslim Student Association held a Friday prayer in the Union ballroom to honor victims of the Christchurch mosque shootings. (Photo by: Justin Prather | The Daily Utah Chronicle).

Statewide, members of The Church of Jesus Christ of Latter-day Saints comprise 61.55% — nearly two-thirds — of the state population, according to a December 2018 article published by The Salt Lake Tribune. Although the University of Utah is the state’s flagship institution, its demographics look significantly different than the rest of the state.

A survey conducted by The Daily Utah Chronicle found that approximately 35.92% of the 32,994 students on campus identify as Latter-day Saints. The next largest religious identities are atheist and agnostic, tied at 14.41% each.

Latter-day Saint membership levels at the U appear to be much smaller than the rest of the state, but most students grew up in the faith. The survey found that 54.1% of students were raised to be members of the church. Now, only 61.48% of those students have remained in the religion, while the majority of those who left the church identify as agnostic, atheist, spiritual but not religious or nothing in particular.

“I know a lot of ex-Mormon individuals, and we have bonded over drunkenly singing children’s hymns and discussing how weird growing up Mormon is,” wrote Emma Swenson, a student at the U who grew up as a member of the church but no longer identifies with any religion.

The church’s retention rate among students on campus is not anomalous. A Pew Research Religious Landscape Study released in 2015 found that the retention rate of adult Latter-day Saints is around 64%. The flight of members away from the church is the result of a number of factors, but some of the most frequently cited include the faith’s policies regarding LGBTQ members and its history of polygamy and treatment of black and indigenous members.

These policies go beyond decreasing membership numbers, though, to affect the way the non-member community perceives the church. Of the students surveyed, 43.46% said their religious experience is impacted negatively by the church’s large presence in Utah, 31.26% said they are impacted positively and the remainder said they are not impacted at all or are unsure.

“The prevalence of Mormonism affects most facets of life in Salt Lake,” said Isaac Martin, a student who was raised in the church and now identifies as an atheist. “I think this is due to the way that the church, both directly and through the voting power of its members, holds a large amount of power over [the Utah State Legislature]. In my personal life, I sometimes feel ostracized from my Mormon family members as well as from Mormon classmates.”

Of the students surveyed, no matter their feelings about the state as a whole, the majority feel welcome on campus whatever their religious affiliations may be. Many attribute this to a student body that is more ethnically and religiously diverse than the rest of the state.

“The University of Utah has felt to me like a safe space in a state that is overwhelmingly dominated by The Church of Jesus Christ of Latter-day Saints,” said Madi Sudweeks, an agnostic student who grew up in a family that was non-denominational Christian. “Coming to campus was the first time I felt like I could meet people like me in Utah.”

“While my classmates preach tolerance and sensitivity to all groups, my religious views are constantly under attack and looked down upon,” said Heather Thiesset, a student who is a Latter-day Saint. “I have to work twice as hard for respect with people, and people are continually biased against me when they know I am a member of The Church of Jesus Christ of Latter-day Saints. There are only two members of the church in my program. I just wish that people understood that disparaging any group to try and promote another group just causes divides and more hurt.”

Although Commuter Services at the U oversees the parking lots at the institute and distributes tickets to those without a permit, the land the building and parking lots are located on is owned by the Church of Jesus Christ, according to Salt Lake County.

Many students who answered the survey remain hurt by the actions of the church and some of its members. Among respondents who acknowledged a divide on campus between students who are Latter-day Saints and those who are not, many expressed that they think the key to breaking down these barriers is getting to know each other as individuals rather than jumping to conclusions.

“I had a fellow student ask me, ‘Are you a Mormon?’ To which I responded in the affirmative. They followed up with, ‘Why do you hate gays?’ I told them that I had gay extended family members and that I love them and that members of the church believe that God loves all of his children. They seemed to brush off what I said,” said Calvin Barnett, a student and member of the church. “People are imperfect. Members of The Church of Jesus Christ of Latter-day Saints are no exception.”