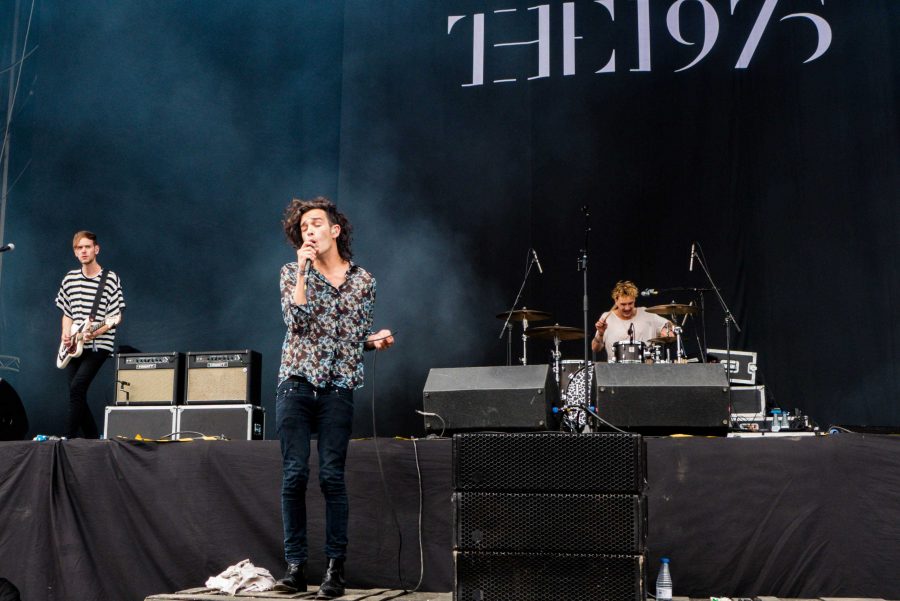 On tour for their latest album “A Brief Inquiry into Online Relationships,” The 1975 played at the UCCU Center at Utah Valley University on April 29. For most of their set, the power filling the arena was electric as the band played some of their biggest hits with some smaller fan favorites.

The night started with opener No Rome, who performed with The 1975 at their Coachella appearance this year. The London-based Filipino artist entered the stage with a lot of energy, but his soft bedroom-pop singles like “Cashmoney” and “Seventeen” couldn’t maintain the attention of the large crowd. His music shimmers but it lends itself more to earbuds than arenas. Following No Rome was a UK alternative band, Pale Waves. Taking the stage with strobing washes of red light, they were a welcome and energizing change of pace. Their unique sound was so refreshing that it’s no wonder they completed a successful headlining tour of their own before supporting The 1975. Even for a crowd that wasn’t as familiar with their music, the mood was still spirited and engaging.

Finally, turning the blinding white stage lights onto the crowd, the headlining The 1975 took the stage and launched into “It’s Not Living (If It’s Not With You),” their current top hit on Spotify. The entire arena was on its feet in seconds, the noise of the enthusiastic screams immediately deafening as lead singer Matty Healy hit center stage. From that point on, the night was nearly overwhelming with the incredible talent and unmistakable devotion to the music, from both the artists and their fans.

The most beautiful technical aspect of the concert was how well the lighting design played off of the aesthetic of each album. Songs from “A Brief Inquiry Into Online Relationships,” like the poppy “Give Yourself A Try,” featured bright chasing lights and synchronized pops of color. When playing some of their softest songs from second album “I like it when you sleep, for you are so beautiful yet so unaware of it,” including the smash-hit “Somebody Else” and a mellow “A Change of Heart,” the fog onstage carried the baby blue and pink hues that matched the cover art. Then catapulting into some of the earliest and heaviest songs from their debut album “The 1975,” like “Robbers” and “Sex,” the stage was completely desaturated of color, amplifying the more aggressive jams.

The 1975 completely delivered to the most dedicated of stans. With references to their wildly popular music videos — from Black wearing the hat from “Sincerity is Scary” as he moseyed across the moving stage to the mind-bending, social-media-based display from “I Like America & America Likes Me” across the jumbo screens — the entire concert connected with the fanbase. In true anarchist fashion, the band projected negative reviews such as “Terrible high pitched vocals over soulless robo beats” on display, even as they played their encore with fervor despite — and in spite of — criticism. Through everything, including stopping mid-concert to have the massive crowd spread out in order to protect overzealous fans from fainting, it is clear The 1975 not only values their work but also values their fans.

Everything said, the show was phenomenal. The dancers electrified the stage, the live camera shots on the big screens added to the intensity, and No Rome made a second appearance to perform the joint hit song “Narcissist.” The night ended in a rousing encore, featuring “The Sound.” It was the song that first exposed me to the band and their first song I fell in love with. It was impossible not to stand up and sing along.