Looking Back at the 2019 Red Rocks 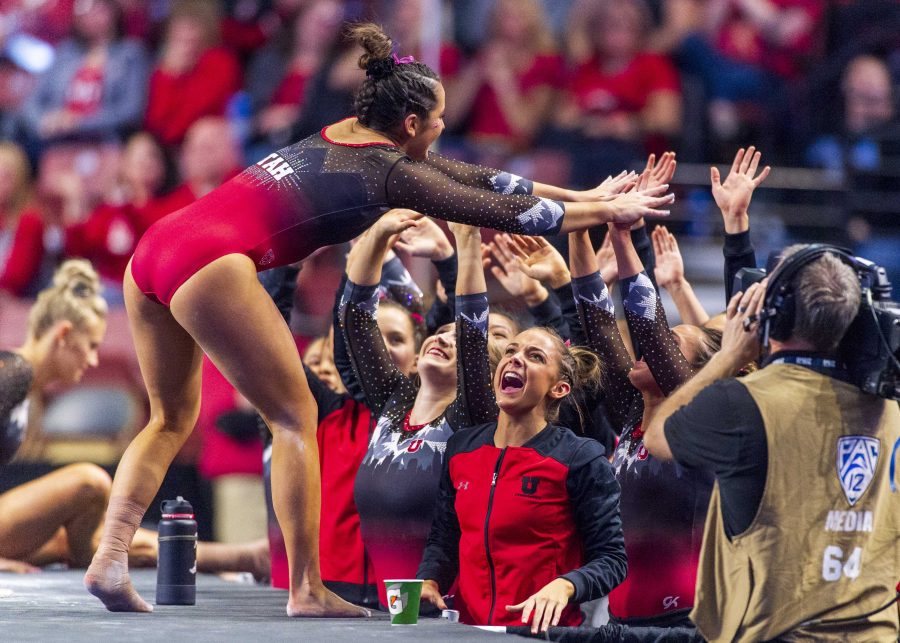 While the season might not have ended up the way the team had hoped, it was a record-breaking year for the University of Utah Red Rocks gymnastics team. For the first time in school history, the team scored 197 points in 12 meets in a row. This year’s team was also one of the first eight in the nation to qualify for the newly formatted NCAA Championship meet. The Red Rocks also set history by qualifying for their 44th consecutive national championship berth.

With all the positives that came from the season, the team also had some lows. Co-head coach Megan Marsden announced her retirement from the team on April 22, and three days later, junior standout MyKayla Skinner announced that she would be attempting to make the U.S. Olympic team and might not be participating in this upcoming season. Both of these added on to the losses of MaKenna Merrell-Giles, Kari Lee, Macey Roberts and Shannon McNatt, who are all graduating.

The team finished the season ranked No. 6 in the nation. Tom Farden was announced as the sole head coach for the team and his first order of business was promoting Carly Dockendorf to an assistant on the team heading into summer conditioning.

This year’s season started off on a high note when the Red Rocks took down Penn State in blowout fashion 197.175-194.450. The next week, the team headed down to Provo to take on rival BYU in the 100th meeting between the two schools. The Red Rocks were victorious in the meeting, taking down the Cougars with a score of 197.250-196.475.

The Red Rocks continued their three-meet road trip the following week when they headed up to Corvallis to face their first Pac-12 opponent, Oregon State. For the second week in a row, the Red Rocks demolished their opponent, this time with a score of 197.150-195.450. The Red Rocks finished out their road trip in Tempe facing Arizona State. The Sun Devils were no match for the Red Rocks, who downed them 197.375-195.825.

At the end of January, the team was ranked No. 4 in the nation and was undefeated.

In the second month of competition, the team went 3-1 in quad meets and took second in their first quad meet of the season. The month started off with a two-meet home stand where they took down both Arizona and Cal. The Wildcats took the bigger loss, putting up a 197.075 to Arizona’s 195.400.

President’s Day weekend was packed with gymnastics for Utah fans as the Red Rocks competed against LSU, Missouri and Stanford in the GymQuarters Invitational on Feb. 15, then flew across the country to take on Stanford in a dual meet on Feb. 18. The Red Rocks took second in St. Charles, falling only to LSU by a slight margin of 197.250-197.075. The team bounced back in Palo Alto, destroying the Cardinal for the second time in three days, 197.125-195.800.

All eyes were on the Jon M. Huntsman Center on Feb. 23 as the then-current national champion UCLA rolled into town to face the Red Rocks. It was a meet for the ages as the rivals looked to take each other down. The Bruins ended up victorious in the first meeting of the season between the two teams, 197.625-198.025.

The month started out with a senior day meet to remember as the team not only posted their highest score of the season so far, but also sent their seniors out with one last win at the Huntsman Center. The Red Rocks took down Michigan 197.975-197.350 and went out on their postseason journey.

For the first time in Pac-12 history, this year’s championship was held at a neutral site. The Maverik Center in West Valley City, Utah hosted a championship for the books. Skinner scored her long-awaited 10 on the floor behind masses of Utah fans. The Red Rocks put up a valiant effort but came in second to UCLA, making it the second year in a row they won the title. Utah’s 198.025, as well as UCLA’s 198.400, marked the two highest scores across the nation for championship week.

The road to the national championship went through Baton Rouge for the Red Rocks. The team was placed in the region by the NCAA in order to qualify for the national championship. The team’s streak of 197’s was broken the first day of competition at regionals when they scored a 196.800 in the first session of the day — but it was enough for the team to qualify for the regional finals the next day. The team rebounded and placed second to LSU with a 197.250, punching their ticket for the NCAA Championships.

The Red Rocks drew the harder of the two semifinals, having to take on LSU and UCLA for the third time as well as seeing Michigan for the second time. It proved to be a challenge as the team placed fourth during the competition with a score of 196.7250, which the team’s season.