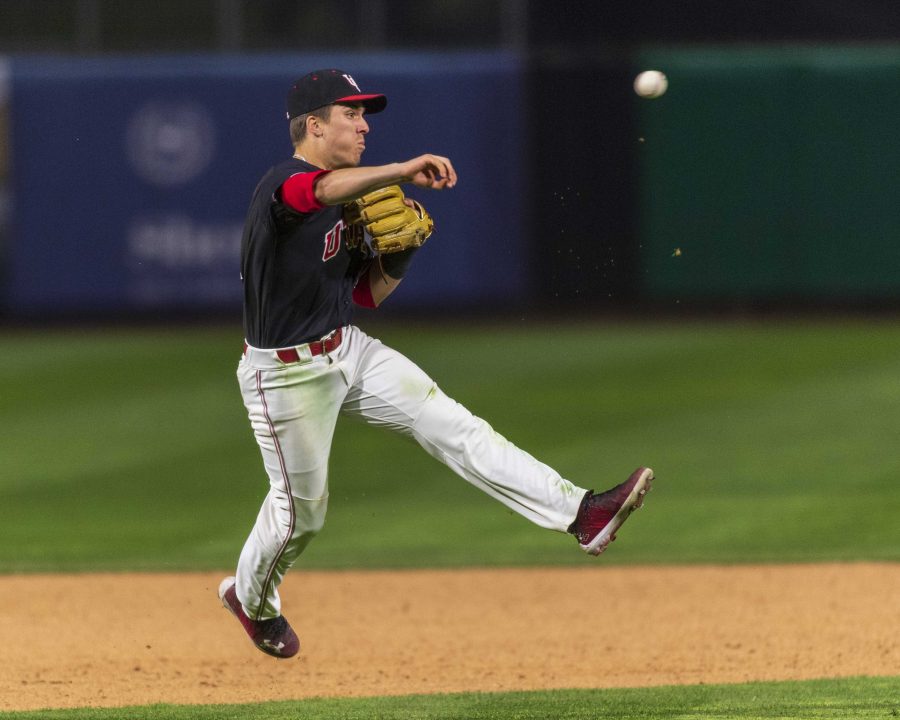 The University of Utah baseball team hosted BYU in their final rivalry game of the season on Tuesday night.

BYU scored in the top of the first on a one-out double to left field. Oliver Dunn was able to help the Utes tie things up with a sac fly to right, driving in Briley Knight.

With the game knotted at one going into the bottom of the seventh, Shea Kramer broke the tie with a double to center field. The Utes were able to get another run across in the eighth, but it wasn’t enough as the Cougars scored nine runs in the final two innings of play.

The final score at Smith’s Ballpark was 10-3 in favor of the Cougars.

After the game, Coach Kinneberg said, “[Jacob] Rebar gave us seven really great innings and then things fell apart for us. Credit to BYU, they played a good game, but we just couldn’t get things done throughout the game.”

Utah is 3-3 all-time against the Washington State Cougars, winning the last series in Pullman, Washington 2-1. This series has been a unique matchup in Pac-12 play, only happening twice since 2012. Currently, the Utes and Cougars fill the bottom two spots in the Pac-12 Conference placing tenth and eleventh in the standings. Their records this season show the Utes at 12-32 (4-23) and the Cougars at 10-37 (2-21-1).

Washington State has made an appearance in four College World Series, in 1950, 1956, 1965 and 1976. The Cougars have only been to the NCAA Tournament three times since 1990 with their last appearance coming in 2010. During the 2010 season, they made it to the Fayetteville, Arkansas regional where they made it to the regional final. Washington State had victories over Kansas State (twice) and Arkansas, before losing to the Razorbacks twice to be eliminated.

Dillon Plew is currently batting .281 leading the team in home runs (4), doubles (12), slugging percentage (.416) and RBI (27). The Cougars have been able to lean on Plew throughout his career in Pullman. He has appeared in 149 games since his freshman season in 2017. Not only is Plew good at the plate, but he is also solid defensively. Sporting a .979 fielding percentage, blew is one of the surer handed fielders for the Cougars. He leads the team in putouts along with combining with Alvarez for 12 double plays this season. Out of high school, Plew was the fourth-ranked second baseman coming out of the state of Washington.

Andres Alvarez is batting .280 for the Cougars and is leading the team in hits (50). He also has 2 home runs, 11 doubles and 21 runs scored, making him among the best in Wazzu’s lineup. Last season, Alvarez was the only Washington State player to start in all 50 games. Although at times he can be a bit shaky defensively (he is second on the team in errors), the Cougars trust his glove as he leads the team in assists. Alvarez was also on the Mexico National Team in 2007.

Collin Montez is also amongst the best hitters in the lineup, being second on the team in home runs (3), hits (48), doubles (11), triples (2) and slugging percentage (.402). After an injury sidelined Montez in the final month of the 2018 season, the sophomore has come back strong at the plate for Wazzu. Montez wasn’t highly recruited out of high school, but being a three-sport athlete alongside a .404 batting average his senior year, Washington State came calling. They haven’t regretted that decision since.

Marty Lees was hired on as Washington State’s new head coach in 2016. Known for his recruiting skills, Lees has led the Cougars to two nationally ranked recruiting classes in his four years at Wazzu. In 2013, Lees was named as one of the top-ten best assistant coaches in the country. He coached at Oregon State and Oklahoma State before making the jump to head coach in Pullman.

Before the 1919 football season, Washington State’s mascot was a terrier dog named “Squirt”. They adopted a live cougar cub as a new mascot in 1919 and named him “Butch”.

The Utes have struggled in their last three Pac-12 series going 0-9 against Washington, California and UCLA. Their last conference win came at home against Arizona State on April 20. Utah is 12-32 (4-23) on the season and is currently in tenth place in the Pac-12.

Oliver Dunn continued his plate consistency going 7-15 against Washington last weekend. Dunn had three doubles with two runs scored to lead the Utes. He also was great defensively with nine assists and zero errors against the Huskies. Known as being one of the most consistent players on Utah’s team, watch for Dunn to keep up this type of play against WSU.

Erick Migueles leads the team in home runs, hitting his seventh of the season against Washington last weekend. Batting .295 on the year, Migueles violent hacks at the plate cause nightmares for pitchers across the Pac-12. Migueles went 4-13 last weekend with four RBI and one run scored.

Rykker Tom hit his first home run of the season against the Huskies in a back to back home run effort with Migueles. Tom was 2-10 at the plate last weekend and looks to improve those numbers this weekend. Tom is known for his defensive ability, being a stalwart asset to Utah’s infield. Look for him to knock balls down at the hot corner and make great plays to get the Utes out of innings.

Utah Head Coach Bill Kinneberg has not only worked for USA baseball but also served as a pitching coach to Italy’s baseball team in the 1984 Olympics.

Smith’s Ballpark will host the University of Utah and Washington State in the Utes’ final home conference series of 2019. Games will be on Thursday, Friday and Saturday at 11:30 a.m. and will be broadcast on Pac-12 Networks.