Farewell to the Fab Five 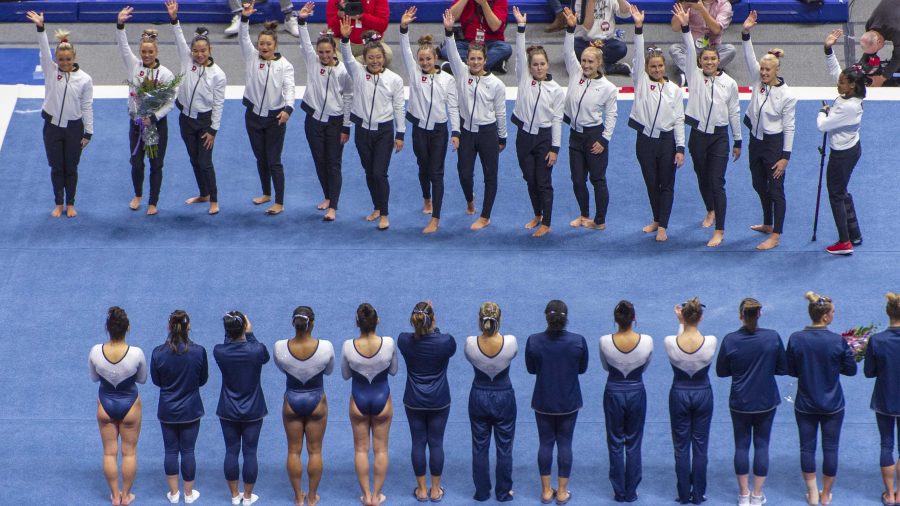 The University of Utah thanks the fans for watching their performance in a dual meet vs. Penn State at the Jon M. Huntsman Center in Salt Lake City, Utah on Saturday, Jan. 5, 2019. (Photo by Kiffer Creveling | The Daily Utah Chronicle)

Every year, teams have to say goodbye to players who have contributed to their success. The University of Utah Red Rocks gymnastics team not only had to say goodbye to four athletes who have been a key part of the team’s success, but also bid farewell to one of the coaches who helped them get to where they are today. 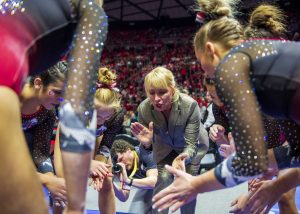 Marsden had been a coach at the university for 35 seasons before announcing her retirement in late April. She started out as an athlete under her now-husband Greg Marsden before being made an assistant after her competition days were over. Then she quickly moved up the ranks to associate head coach, and finally to the position of co-head coach. During her 10-year tenure as co-head coach, the Red Rocks went 222-80-3. She was named Pac-12 Coach of the Year in both 2014 and 2015, sharing the honor with her husband. She also produced 222 All-Americans during her time. She coached the team to Pac-12 Championships in 2014, 2015 and 2017.

Q: What is your funniest memory from this year’s team?

A: “At regionals one night Sydney [Soloski] and MaKenna had created a Family Feud game and it was really funny and it was fun and I was so impressed with all they had done. On the next night, Tom topped it with a rock paper scissors bracket championship with everybody in our travel party at regionals, which was about 28 people and it was really fun and he created certificates for the champions. I had a lot of fun that night and there was a lot of belly laughing.”

Q: What is your greatest memory of coaching here at Utah?

A: “As a coach there has been many great moments and they may seem insignificant and small, but they are the ones that really make my heart warm. It has to be with working with my girls. Any one of them and there is something that clicks to them. It might have been something gymnastics-related. As of recent, it’s MaKenna at the end of her bar routine at nationals when she landed her dismount and stuck it but she was a little forward, she held it low and then she did this amazing dramatic slow head raise, like ‘did you see that?’ Her freshman year I did not see any way I could teach her that kind of finesse in what I call her ‘tada’ or ‘head-lay-back’ moment. I didn’t see anyway I would get her to look really good doing that and there it was, and that was a moment.”

A: “I so appreciate that a few of them started with Greg and I way back in the beginning and have hung with us all the way through, and if not them, then their children who they passed their tickets on to. We feel their embrace in that arena of all their years of support and they have helped us nurture these incredible athletes in very formidable years and I give them credit for helping us. They have helped us make these athletes who they become from the experiences they have and some of their very experiences that our alumni athletes reflect on are their times in that Huntsman Center on the floor competing for the fans of Salt Lake City and the surrounding areas, so I thank them for helping us nurture these young women into the great people they are.” 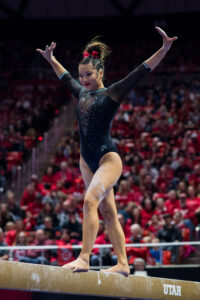 Lee hails from Peoria, Arizona and has competed for the Red Rocks since her freshman season. Lee was sidelined for the final 10 meets of her sophomore season but came back looking like she did not miss a single meet. During her five years at Utah, she was a three-time Pac-12 All-Academic team member, as well as a member of the All-Pac-12 team for three years. During her senior season she was named co-captain with MaKenna Merrell-Giles. She had 16 career victories and went 132-139 on her routines. She is also a three-time All-American with career high scores of 9.975 on both the bars and beam. Her highest score in the all around category was a 39.525.

Q: What is your best memory with Megan?

A: “She was definitely our mom away from home. Just like little things that moms know, Megan would know. So if it was anything we would call ‘fluff stuff,’ we would always go to Megan and ask her for help.”

A: “The people that I have met here have been the best part about coming to college here. Obviously competing in front of 15,000 fans, you can’t really beat that, but for me I really think it is the relationships that I have built with the people here.”

Q: What are your plans post-graduation?

A: “I am getting married at the end of July, and then I’m going to start working at my family gymnastics business in Arizona called Flames Gymnastics. I’m hanging up the leotard and helping other girls put on leotards.” 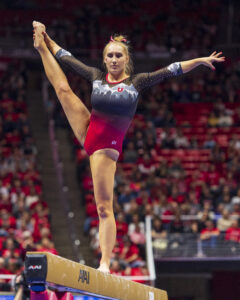 The Houston native was a key part of Utah’s beam lineup during her time at Utah. During her sophomore season, she was the regional champion on the event, coming out of the sixth spot for the team. She was a two-time member of the Pac-12 All-Academic team. She hit 8-9 of her routines during her time at Utah. She is a double major in analytics and quantitative analysis of markets and organizations and economics. She has 4.00 cumulative GPA. During her senior season she earned the Elite 90 award at the NCAA Championships. The award is given to the student-athlete with the highest GPA that is participating at the NCAA Championships. She is the second Ute in history to win this award. She is also a three-time WCGA Scholar All-American.

A: “One of the greatest memories has to be winning the Pac-12 my sophomore year. Also, winning beam at regionals that year for me was a major highlight.”

A: “Thank you for all of the support over the past four years, the experience at the U wouldn’t be what it is without the fans. There’s no place like it and it’s incredible.”

A: “I have a job with Lucid Software in South Jordan starting in June and I’ll be doing data analytics for them.” 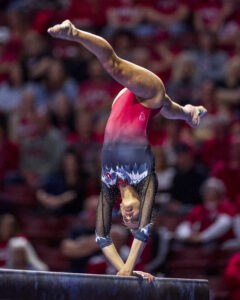 Merrell-Giles is the lone local product to be graduating this year. The Pleasant Grove native was a six-time All-American for the team. Three times during the regular season and three times at the NCAA Championships. She was co-captain with Lee this season. During the 2018 campaign, Merrell-Giles was named the regional floor champion. During the same season, she scored two perfect 10s — one on the floor and the other on the vault. She was also the Pac-12 vault champion that season. She has 21 career victories during her time as a Red Rock. She is also in ninth place in school history with her all-around score of 39.675. She has hit 125 out of 132 routines during her time at Utah. Just like McNatt, she is an NACGC Scholar All-American.

Q: What is your funniest memory from this year’s team?

A: “So we wanted to pull a prank on Tom [Farden]. He brushes his teeth everyday when he comes into the gym. As we are warming up, he has a toothbrush at the gym with toothpaste in this little drawer and then he just uses the drinking fountain and he brushes his teeth. I’m not exactly sure why but he does it everyday without fail at the exact same time. We thought it would be funny to put hot sauce on his toothbrush, so we put a bunch of hot sauce and we made it look not red and we were able to cover it up but you were able to still smell it and obviously it was still spicy and we were running around the floor and we were watching him because he had just pulled out his toothbrush and he puts it in his mouth for like two seconds and then he takes it out and looks at it and then he puts it back in and he is brushing for a little bit and he takes it back out like ‘girls, what did you do to my toothbrush?’ and it was so funny. So every time he brushed his teeth he would smell the toothbrush and rinse it off.”

A: “Thank you so much for supporting me through my highest of highs and my lowest of lows. I’ve always felt loved and that the fans actually cared for me and provide with the best community I could have ever had throughout my gymnastics career.”

A: “I actually have one more year of school after this. I am not graduating until next spring, so I am going to stay on and be the student coach with Macey.” 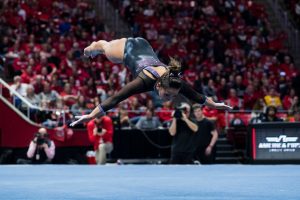 Roberts’ journey to Utah was not like the other graduating members of this year’s team. She transferred to Utah from Maryland after her freshman year. She qualified for the NCAA Championship as an individual on the floor. The McDonald, Tennessee native has hit 51-53 career routines during her career. During her first year with the Red Rocks she was perfect, going 23-23 on all her routines. She was also a starter on both the floor and the vault. She is a member of the Pac-12 All Academic team and has been on the Athletic Director’s Honor Roll list. Her career high on the floor was a 9.950, and on the vault, a 9.90.

A: “Getting to know all the girls and the coaches. Other than that, I think the memory that sticks out the most was my sophomore year, winning the Pac-12 championship, that’s just an indescribable feeling.”

A: “Thanks for all your support. Honestly the fans are the ones that drive me the most. Thanks for supporting everything I do.”

A: “MaKenna and I are student coaches next year, so we get to stick around and be with the team for another year, which is very exciting.”