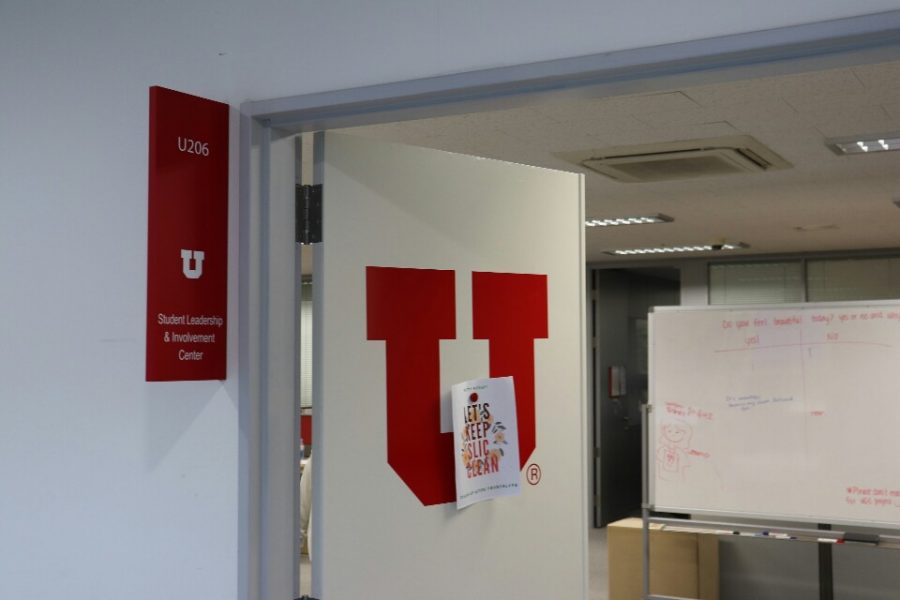 Student Leadership and Involvement Center at the University of Utah Asia Campus. (Photo by Mitch Shin | The Daily Utah Chronicle)

Susan Park and Sandy Kim won a landslide victory against John Kim and Wonji Kim in the 2019-2020 student council election at the University of Utah Asia Campus (UAC) after three separate elections were held. Park and Sandy Kim were elected as the new student council president and vice president with 76.2 percent of the vote. The election is over, but the voting process still has lasting effects on the campus.

Randy McCrillis, Dean of Students at UAC, announced his decision to postpone the student council election on May 17 through an email blast to the UAC community. According to McCrillis’ email, he postponed the election because of the “security of ballot.” Some students shared their concerns about the security of ballot in the second election, so McCrillis decided to nullify it and proceed to the third election with a new format.

UAC students already voted for the candidates during the voting period, from May 15 to May 17, through OrgSync. However, UAC students needed to vote again from May 21 to May 23 due to the decision by the Dean of Students office.

It was the first time students were asked to re-cast their votes for the election due to OrgSync. UAC has used this online voting format for its elections since its opening, but it is the first time that students raised concerns about security issues.

Cody Garrison, Assistant Director of Student Leadership and Involvement and Residence Life, said that OrgSync is “the most efficient format” for UAC students to vote. Garrison recognized that there were some problems on the voting format, but otherwise had no further comment on their decision.

Garrison sent an email to students before the first election with a personal verification code on May 13, but every student received the same code number.

The student council presented an information session on April 16 for students who wanted to run for the election and planned to vote from May 8 to May 10, but they presented an information session again on May 7 and changed the voting period due to the substitution of the election chair. UAC election board needed to reschedule the whole process of the student council election due to the complaints about the former election chair.

The UAC election board hosted the debate on May 15 at U108 for the candidates to introduce their visions and goals to improve UAC and inform voters about why they should be the leadership team of the student council.

Two pairs of candidates were running for the student government leadership team — Park and Sandy Kim, and John Kim and Wonji Kim. Park, who ran for the position of presidency, is currently working as an orientation leader. John Kim, who is currently the president of the student council, was running for his second term. Sandy Kim and Wonji Kim were both running for vice president, and both had experience as student leaders at UAC.

Since John Kim is the president of the student council, there were some students that questioned his neutrality as a candidate. Students were suspicious that he had access to look at the whole process of the election through OrgSync with his UID. McCrillis explained some issues surrounding the student council election on May 21 via email to the UAC community: “Investigation commenced on Friday, May 19 at 5:00 p.m., and it revealed that the reported irregularities were occurring. Thus, I have determined the need to nullify the election and the subsequent results.”

As a result of the irregularities within the last ballot, students needed to vote in the format with more advanced security.

It was the first time in UAC history that students had to revote for the third election in a month. UAC students will not be voting for their candidates in the Orgsync format in future elections.