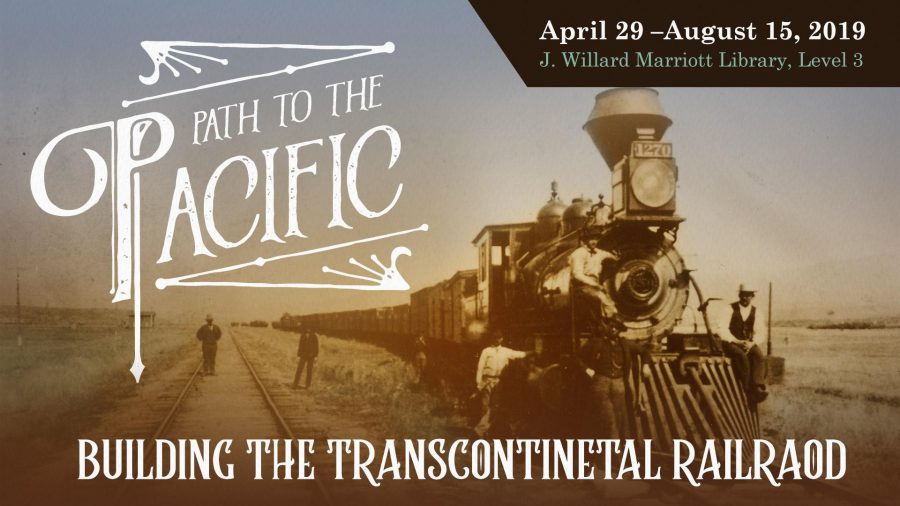 May 10 marked the 150th Anniversary commemorating the driving of the last spike, known as the Golden Spike, of the Transcontinental Railroad which connected the Pacific to the Eastern railways. State and Nationwide organizations celebrated the connection of the Pacific to the Eastern railways by displaying and hosting events in order to share, inspire and educate the public on its history. The University of Utah’s Special Collections joined in the remembrance by displaying two walls of replicated graphs, maps, photographs, rare books and original letters among other well-taken care of archived materials in the “Path to the Pacific: Building the Transcontinental Railroad.” The exhibition is free and located on the third floor of the J. Willard Marriott Library until August 15.

Though space was limited for the exhibit’s presentation, Alison Elbrader, lead curator and Special Collections Reference Librarian, had split the gallery between two opposing walls across the entryway of the North-Eastern side of the library while the showcase is in the center aisle behind a pillar. It’s almost hard to miss the protective encasing as you walk through or come down or up the stairs, especially when you consider the massive eight-foot-portrait replica of people surrounding the iconic trains, Jupiter, that came from California, and 119, from Omaha. All replicas and reproductions are surprisingly created in-house. With the help from the print and design team, Elbrader divided the gallery using “all the physical landmarks” with one wall featuring the railroad building from Omaha to Promontory. The other wall “chronicles the same important landmarks from the Sierra Nevada’s [range], the desert marking from Sacramento to Promontory. So you can get a sense of traveling all those railroads themselves to the center, which is the case.”

Landmarks include Devil’s Canyon, Devil’s Slide, Echo in Weber Canyon and the plains of Wyoming. Photographs depict building and specifics of railroad difficulties such as pulling an engine on a cart to fix a broken down train. There are also enlarged maps and profiles which were used for listing the heights of the mountains.

Within the one showcase, the detail was astounding. Materials of original work, photographs, letters and a special card memento given to those during the 100th Golden Spike Anniversary when travelers purchased a ticket in 1969. Authentic books spoke of reasons for continuing the Transcontinental Railroad out West. Reports by engineers had marked and written where it should be built and why.

Congress was convinced by Theodore Judah, who was obsessed with the transcontinental idea, and thereby, President Abraham Lincoln passed the Pacific Railroad Act of 1862, even though the Civil War was underway. The Eastern part of the railroad built West from Omaha by the Union Pacific Railroad company as it met the Central Pacific Railroad company coming East from California met at Promontory, Utah (located in a town West of Ogden, named Corinne, now a ghost town) to land the Golden Spike in 1869.

Elbrader is a delightful and very knowledgeable woman excited to share information on rare books, the meanings behind them and the history she delicately displayed in her exhibition. She touched on the story behind some of the letters — a couple, for instance, writing to their loved one about work and Christmas while others sent messages to Brigham Young asking for additional and past due funds as they trenched their way through the icy cold Utah mountains.

These are only a few examples from a collection of Philip T. Blair’s “75 boxes of letters that cover the whole family’s life” of three generations. The collection was donated by the family to the Marriott Library. Other items, such as the books, have been with the library since they were published in 1880.

Elbrader can be found on the fourth floor of the library in the Special Collections Reading Room soon to be setting up the second part of the Transcontinental Railroad. Entitled “Scenic Routes,” this exhibition will be open from June 15 to September 15, focusing on what came after the union. Elbrader will also be setting up a Veteran’s remembrance exhibition at the end of September that will last through the end of the year. The display is definitely worth admiring before it’s taken down.

More information on rare books, documents, periodicals, photographs, films and other materials can be found in Special Collections, located on the fourth floor of the library. Though nothing can be loaned out or removed from the room due to their preservation and original work — the staff is more than willing to make replications, as well as allow photography without the use of flash.

The reading room was specially created for those to have an area for observation and research in a controlled environment. Special Collections has also made all their content available online through the Marriott Library’s site.