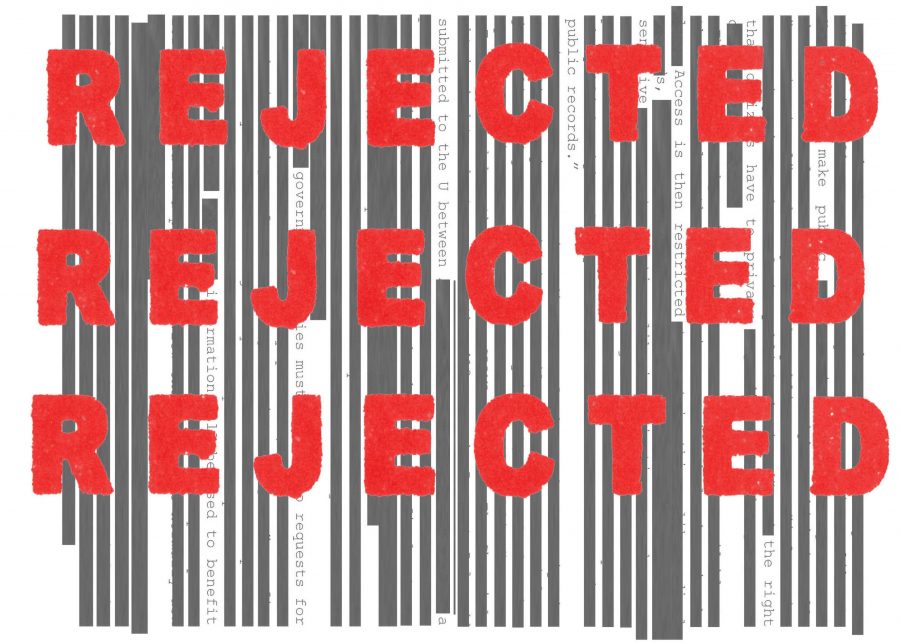 Transparency in government relies on the public’s access to information detailing governing bodies’ actions and tax-sourced finances. According to a 2015 Pew Research Center survey, only 5% of Americans think state governments share these records effectively.

In an analysis of public records requests made under Utah’s public records law to the University of Utah, The Daily Utah Chronicle found that the U responds to most requests within the legally mandated response time. However, journalists experience the slowest response time and more denials than any other group.

Utah passed the Government Records Access and Management Act (GRAMA) in 1991. It regulates how government entities — like the U — store, make public and restrict access to government documents. The law tries to balance two rights, which it calls “constitutional” — the right of the public to access “information concerning the conduct of the public’s business” and the right that citizens have to privacy regarding data the government collects about them.

The law begins by making all government documents available to the public, unless they are otherwise restricted elsewhere in the law. Access is then restricted to certain things like medical records, citizens’ financial information and information about sensitive government operations like investigative procedures.

In drafting the bill, the Utah Legislature said it intended to provide rules for access and restriction of documents and “promote the public’s right of easy and reasonable access to unrestricted public records.”

Eric Peterson, executive director of the Utah Investigative Journalism Project, said in an email, “GRAMA is essential to journalism and government transparency in Utah, it is the law that opens up the inner-workings of government to the public.”

To understand how the U handles GRAMA requests, the Chronicle obtained data about each of the 419 records requests submitted to the U between Aug. 22, 2018 and March 15, 2019 — a period of almost six months. This information includes the dates on which the requests were submitted and closed, the final outcome of closed requests, the status of open requests as of March 15 and the name of the person who submitted each request.

The Chronicle excluded 20 of those requests — some were withdrawn or should have been submitted elsewhere — and analyzed data from 365 closed and 34 open requests.

Under the law, government agencies must respond to requests for documents “[a]s soon as reasonably possible, but no later than ten business days after receiving a written request” or five business days after receiving a request that asks for an expedited response. Journalists can ask for an expedited response because the law recognizes that the information will be used to benefit the public rather than an individual. Shawn Wood, spokesperson for the U, said in a phone interview that reporters normally ask for that expedited response.

The response could look like sending a copy of the government record, a denial, a partial release with some parts of a document redacted, saying another agency has the document, or informing the requester that — because of “extraordinary circumstances” — the request can’t be responded to within the time limit.

Peterson said the law’s time limits are an important measure through which government agencies are held accountable to the public.

Wood explained that all requests go through the same process once they’re received by the U. No single database of all records held by the U exists, so the office that handles requests asks departments and offices which might have documents to send them for compilation and review. Then decisions are made as to whether that information can be released.

Excluding journalists, the U tends to close GRAMA requests within the 10 business day time limit. In the Chronicle’s analysis, the average time it took to close all requests not made by journalists was 5.22 days, and 86.44% of those requests were responded to within 10 business days.

In fact, many groups received responses more quickly than the law requires. The U responded promptly to the requests of contractors, public records companies, students and other individuals with interests unrelated to business.

This could indicate that the U uses time extensions more frequently in responding to the requests of journalists than other groups.

Wood said, “The timely fulfillment of a GRAMA request depends on: the number of other open requests, details/scope, gathering data and other resources, compilation, legal review, redaction of private information and a final review. Time extensions may be necessary at multiple steps in the process.”

Time Extensions in the GRAMA Process

The length of the time extension an agency can take under some of these circumstances is limited. For example, if a government agency has to seek legal advice about a request, they’re given only five extra business days to respond. Other situations require the agency to respond “as soon as reasonably possible” and don’t include a specific restriction. This is the case when the agency has a large influx of requests.

In the data analyzed by the Chronicle, it’s impossible to tell whether time extensions were used in the requests marked as closed. However, the use of time extensions is noted for requests that remained open when the data set was created. Only 34 requests were open, so it’s difficult to know whether those situations illustrate what usually happens or whether they’re out of the norm. However, the individual circumstances included in the limited data provide insight into the potential extremes of a requester’s experience.

One journalist’s request with a time extension had been open for 57 business days when the data set was created — the request was submitted on Dec. 20, 2018, and was still open in mid-March. Another request that appears to have been made by a company with business interests was open for 72 business days. It had been submitted to the U in late November 2018.

Journalists had far more requests that remained open for longer than the law’s response time than any other group — 14 of the 19. Six of those were requests submitted by Chronicle staff members.

Wood explained that the U “always communicates with [requesters] within the allotted time. [That communication] may not be fully responsive, but we’re at least letting them know the status of the request.”

Wood said that companies “requesting the results of a competitive bidding process or contract” or individuals “looking for their own employment records or other information” will have fast response times. However, a number of factors may cause lengthy response times. He gave examples including situations described in the law as “extraordinary circumstances,” as well as circumstances in which the records being sought don’t yet exist or the requester has asked for police reports for cases still under investigation.

After the U made international headlines for the murder of student-athlete Lauren McCluskey, journalists throughout the country flooded the school with public records requests. Between her death on Oct. 22 and the completion of an independent review into the university police department’s actions leading up to the killing on Dec. 19, reporters submitted 40 records requests to the U. Of those, only two — or 5% — of the requests resulted in a full release of documents.

Under GRAMA, government entities should restrict access to many types of records and not release them to the public. For example, they should deny records requests if the documents requested contain private information like a person’s medical history, personal contact information or someone’s eligibility for welfare benefits. They should also deny requests for records that contain trade secrets, some commercial information, test questions and records from civil or criminal proceedings if releasing the documents would “interfere with investigations.”

The U gave the possibility of interfering with police investigations as the reason for denying the Chronicle’s requests in the wake of McCluskey’s murder.

GRAMA reads, “If the governmental entity denies the request in whole or part, it shall provide a notice of denial to the requester either in person or by sending the notice to the requester’s address.”

That notice is generally required to contain a description of the information that was denied, citations to the laws or court orders that prohibit the agency from sharing the record and information about the requester’s right to appeal the denial.

Additionally, GRAMA states that, “If the governmental entity fails to provide the requested records or issue a denial within the specified time period, that failure is considered the equivalent of a determination denying access to the record.”

Of the 365 completed requests analyzed, 72 — or 19.73% — were denied to some extent. More than half of those were full denials, amounting to 47, or 12.88% of all requests. In comparison, 42 — or 60% — of journalists’ requests were answered with denials. Just over one-third — 37.14% — of reporters’ requests were fully denied. The Chronicle was more frequently denied than other groups. Overall, 10 — two-thirds — of its requests were met with denials. Eight were full denials, comprising 53.33% of the newspaper’s requests.

Wood explained, “Denials can be the result of the information requested and the legal definitions of the law. Denials also occur if documents or records don’t already exist. By law, entities are not required to create documents not already in existence.” He continued, “If a GRAMA request is either partially or fully denied, the requester may appeal that decision. If appealed, it first goes through an internal process. If upheld, it can then be appealed to the State. This process can take months as the data shows.”

According to Wood, even coming to the decision to fully deny release of records can take time. As with every other request, departments and offices across campus are contacted to see what files exist and what information is contained in them.

Peterson — who described the law as “a check on government” — said, “it also strengthens our institutions and also helps recognize agencies and public servants who are responsible and wise stewards of public resources.”