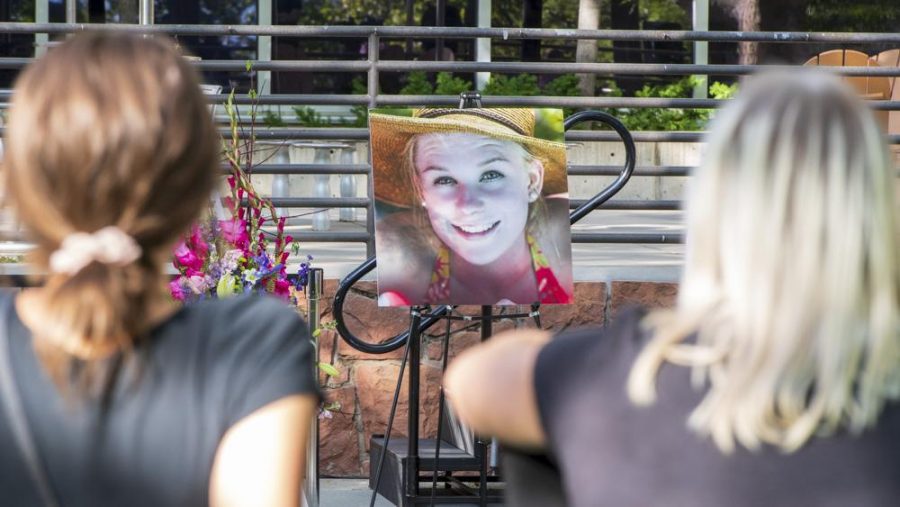 Students, staff, and friends attend a vigil in remembrance of MacKenzie Lueck at the University of Utah Student Union lawn in Salt Lake City, UT on Monday, July 1, 2019. (Photo by Kiffer Creveling | The Daily Utah Chronicle)

The speakers at this event have asked that their last names be omitted from this article.

Students, alumni, friends and loved ones gathered on the A. Ray Olpin Union lawn on Monday, July 1 to mourn the loss of University of Utah student MacKenzie “Kenzie” Lueck.

“When I had envisioned tonight, this is not what I had planned,” said Ashley, a friend of Lueck’s. “We had planned a prayer vigil for MacKenzie’s safe return for this evening.”

On June 17, Lueck went missing after returning from California, where she attended her grandmother’s funeral. After her flight landed at the Salt Lake City International Airport, she texted her mother and then ordered a Lyft ride to Hatch Park. Though this was the last contact from Lueck, she was not officially reported missing until June 20.

Lueck was studying kinesiology with the intent to become a nurse and was working for PRA Health Sciences as a lab associate.

“She loved the field and was very interested in pursuing a career in health sciences,” said Lori McDonald, vice president for student affairs. “She talked with her advisors about possibly going to nursing school or medical school. She was looking forward to a career centered on helping others.”

Lueck was also active in her sorority, Alpha Chi Omega, and intended to graduate during the 2020 school year. Juli, another of Lueck’s friends, remembered how willing Lueck was to help others and shared how Lueck helped her to decorate her graduation cap “last-minute.”

“We were able to come up with a beautiful grad cap,” Juli said. “And I was really looking forward to helping her put hers [together] this spring.”

Other friends commented on “her bubbly and witty personality” and how Lueck “had a way of making you feel special.”

“While life without Kenzie will be far from easy, I will live every day knowing that her sweet spirit is with me,” said Katie, a fellow sorority sister. “I will continue to love and cherish the friendship we had.”

In a press conference on June 28, the Salt Lake City Police Department confirmed the death of Lueck after investigating a home in Rose Park. The owner of the home, Ayoola Ajayi, was charged with murder after police found burned personal items and DNA belonging to Lueck. He was arrested later that day, and a judge ordered that he be held without bail.

“This person took away our friend, but he will not take away our strength,” Ashley said. “We will continue to advocate for victims of violence in our community.”

Kennedy, Lueck’s sorority “little,” spoke of how Lueck’s voice was taken away “during her disappearance and time of death” and announced the beginning of “MacKenzie’s Voice,” a nonprofit “that will help other missing victims and families.”

“While MacKenzie’s story is tragic, it is also a story of friendship and the strong bonds of women,” Ashley said.

“We hope to continue this mission and are looking forward, toward the future, with the formation of our foundation in MacKenzie’s name. We hope that with this foundation, we can help other families and victims get the closure that they need.”