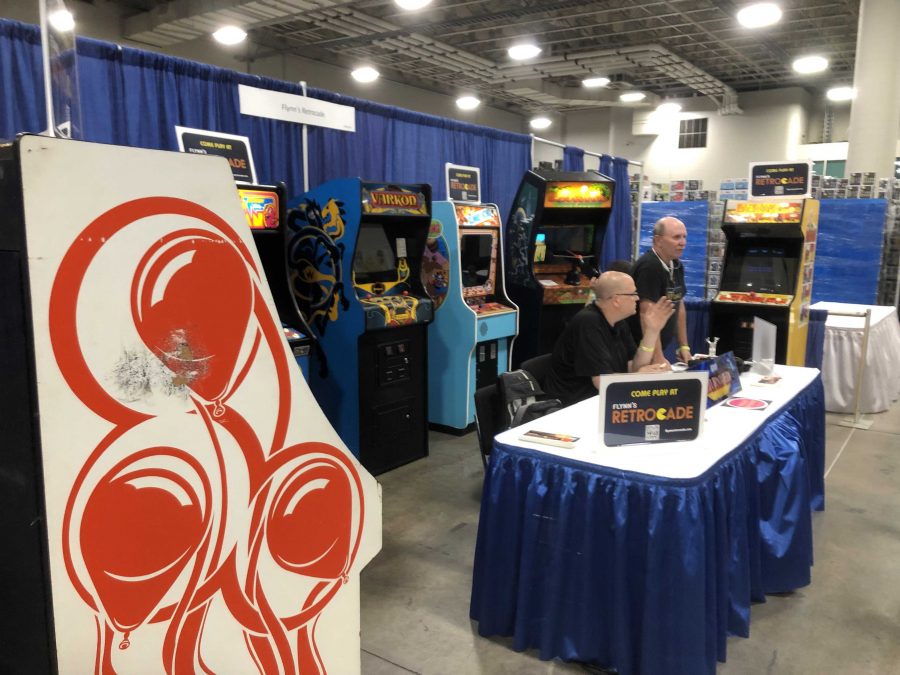 Flynn's Retrocade features many arcade games that you may not have heard of at SLGC. (Photo by Ray Gill | Daily Utah Chronicle)

Walking into Salt Lake Gaming Con, one experiences the feeling of being lost. It’s hard not to feel this way since the event was held in only one section of the Salt Palace. The biggest convention of the year, FanX, took up the rest of the venue, and it turns out there were three conventions going on at the same place during this past weekend. The journey of going through the doors, upstairs and all around to the convention was worth it, however, since the event has so much to offer for gamers and nerds alike. Salt Lake Gaming Con is cheaper than many conventions, and it has many unsung opportunities available, including event interactivity and the opportunity to meet guests.

Salt Lake Gaming Convention (SLGC) is one of six of the largest independent gaming conventions in the country. They strive to make an all-in-one social event for gamers, pop culture fans and aficionados of anything geek related. This includes esports, new and old games, gaming tournaments, tabletop gaming, celebrity and local guests, cosplay, vendors, artists and panel discussions.

The event floor was updated this year to offer more variety. This year was the first time I was able to attend the event for more than just one day. Saturday is usually any convention’s largest day; however, Thursday was actually the most impactful. With less of a crowd, it was much easier to breathe and sightsee.

Most of the attendees were somewhat celebrities in the cosplay community, including Lisa Pinelli (@lisaapinelliofficial), Raychul Moore (@onlyalicat) and Tara Cosplay (@taranicoleazarian). A surprise guest showed up on Thursday — voice actor Brian Cummings. Cummings was a large influence though minor characters in the 1990s and 2000s Saturday morning cartoon era. He put these talents to use and surprised guests yet again by voicing Sculptor in the recent From Software game “Sekiro.” The Sculptor set the tone for the game, even though he was a minor character. Cummings said, “People who like [From Software] games usually listen to it in the original Japanese with English subtitles, but in English with ‘Sekiro’ as they like the performance.” It’s important to celebrate other crucial people in the gaming field other than developers and creators of the games themselves, including fans, cosplayers and voice actors who bring characters to life while sharing different cultures from the games that inspire them.

In a comic book and indie game developers area was Doctor Volts. His booth featured Funko Pop Dolls, comic books about different types of heroes and villains and Ainsley’s cosplay collectibles and props. Ainsley is famous for her hand sculpted “Metroid” suit and “Sekiro” Oni Masks. She also cosplayed as the main character who is a villain in Velleity Studios’ comic book “Ruthless.”

Another was Canadian indie game developer, Derek Chung’s Nomnivore Games Inc. who created and developed the game “Emberwind.” Emberwind is a game similar to “Dungeon and Dragons,” designed to be mastered within a short period and played with or without a game manager or narrator. The most intriguing aspect of the game is that it was created with psychological stressors in mind. Chung used his background in psychology to create a game that helped children and veterans with stressors such as PTSD.

There is so much more to view that it is almost overwhelming to take in, but one of my goals was to get more of a personal and occupational experience out of SLGC this year. Meeting some of the artists, cosplayers and indie game developers and speaking with them really helped add reality to how much work, motivation and patience you need to have in this industry.

An earlier version of this piece misstated the username of Tara Cosplay. Her username is @taranicoleazarian. We regret the error.