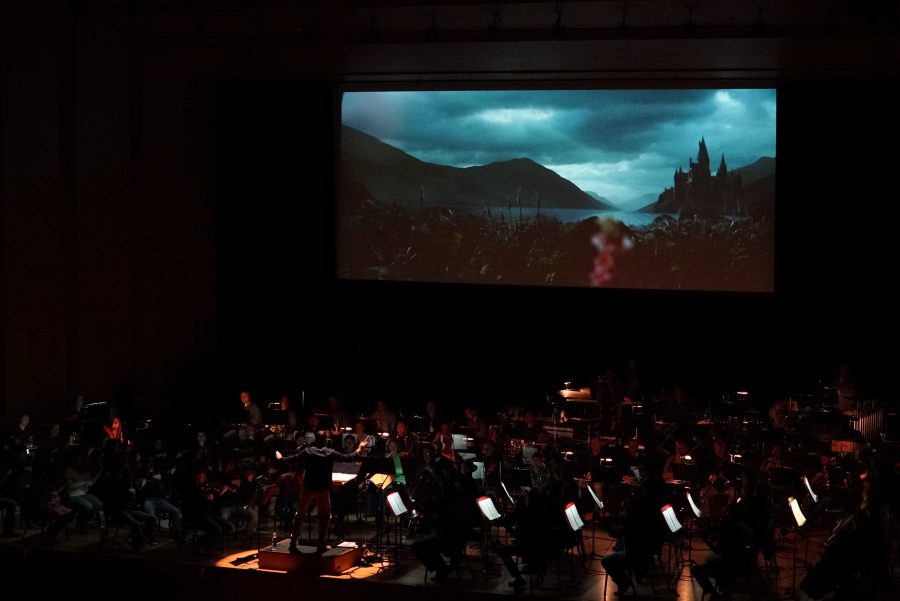 When people hear the word “symphony” there are traditionally two different responses: excitement or a deep sense of dread. The Utah Symphony is keen on evoking the first response with their Films in Concert series, in which they perform famous movie scores while the accompanying film plays on a big screen. This experience is not only unique, but it redefines what it means to attend the symphony. While the Films in Concert series has many different movies they perform, they truly brought the magic to Salt Lake City from June 20-22. The “Harry Potter and the Goblet of Fire” in Concert production brought scores of witches, wizards and muggles to Maurice Abravanel Hall to experience a film that came out nearly 14 years ago.

Upon walking into the famous and beautiful lobby of Abravanel Hall, it became instantly clear that this was no regular symphony event. While some people were dressed up in formal clothes, the majority of the attendees were clad in their “Harry Potter” house gear, robes and other costume pieces. There was even a contest hosted with the promise of tickets awarded to one lucky patron in costume. The lobby was buzzing with people buying “Harry Potter” merchandise and trying to get their picture taken in front of the famous Hogwarts castle backdrop. As everyone waited for the show to begin, people could be found eating outside at the Hawaiian food truck Dakine Ginz — yet another sign that this night would be far from the usual symphony night scene.

Once everyone settled into their seats, associate conductor Conner Gray Covington stepped out onto the stage. After a brief explanation of how the show would be happening, Covington paused, glancing around the hall. “You all seem like a very respectful audience,” he said. “We don’t want that tonight. We encourage you to get loud. Cheer for your favorite characters Boo for your least favorite.” He followed this up by encouraging the audience to cheer for their respective Hogwarts houses. The short but lighthearted speech set another crack in the traditional understanding of what a symphony should be. As the movie began to play on the big screen, audience members followed Covington’s advice enthusiastically. The crowd cheered as each of the series’ famous actors came onto screen, hooted suggestively when the characters had to traverse the world of adolescent romance by finding dates to the Yule Ball and booed when the unnameable villain of the series appeared.

Watching the movie while the symphony played the famous original score by Patrick Doyle live was a whole new experience. As any good movie score should, the symphony added to the movie at the appropriate moments without detracting from the watching experience. There were maybe one or two scenes where the music overpowered the film, but for anyone familiar with the fourth movie of the Harry Potter franchise, this is hardly surprising with a score to fit an intense plot. The two-hour experience was able to recreate the magic of the Wizarding World in a way even die-hard fans haven’t experienced before. This production has not only revived the series for those who enjoyed it as children but allowed the next generation to appreciate symphonies in a new way. In 2016, “Harry Potter and the Sorcerer’s Stone in Concert” premiered and was an immediate hit, and the rest of the stories in the series were added soon after. In 2019 alone, there’s an expected 900 performances taking place across almost 50 countries around the world.

Each section of the symphony orchestra was put to use throughout the film, and each of their respective parts were wonderful. Of course, the most remarkable piece of music to accompany the movie was the beloved theme song. Any respectable Harry Potter fan will be at the ready with their wands the moment that iconic song begins.

The magic of the Wizarding World will be coming back to Salt Lake soon for those who missed out on this show. In December, the Utah Symphony will perform “Harry Potter and the Order of the Phoenix” in Concert and next June “Harry Potter and the Half-Blood Prince” in Concert. However, these aren’t the only movies to come in the upcoming year. In November, there will be a special tribute to Hispanic Heritage Month with a presentation of the Disney animated movie “Coco.” Other productions will include “Star Wars: The Empire Strikes Back” in Concert, “Singin’ in the Rain” in Concert and “How To Train Your Dragon” in Concert.

The Utah Symphony has two different discount options for student tickets. The Design-A-Series package allows you to choose four different shows with tickets available up to half off, and the All-Access-Pass allows unlimited access to all shows for $69.

As someone who is an avid fan of “Harry Potter” and a less than avid fan of traditional musical performances, this series is something I would recommend to anyone. The work the Utah Symphony does with these Hollywood blockbusters is exquisite and worthy of tribute — and not something you’ll want to miss.