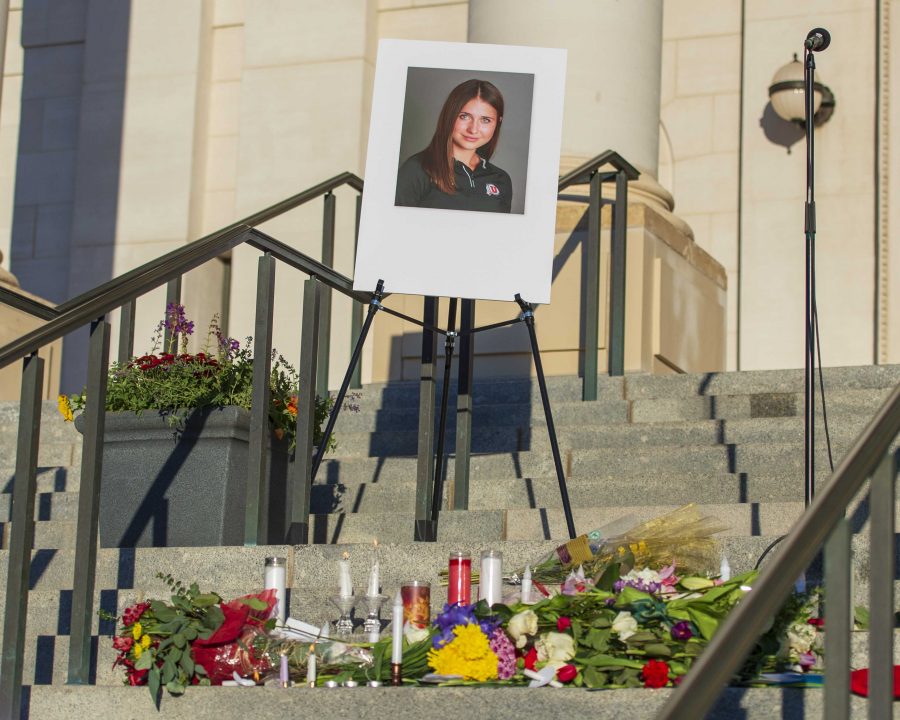 Students, staff, family and friends attend a vigil on the steps of the Park Building for Lauren McCluskey who was tragically killed on campus at The University of Utah in Salt Lake City, Utah on Wednesday, Oct. 24, 2018. (Photo by Kiffer Creveling | The Daily Utah Chronicle)

Lauren McCluskey’s death was preventable. While the University of Utah has claimed that there was no action it could’ve taken to prevent this, their assertions are obviously untrue — so much so that it’s disturbing that that three university employees of the Department of Safety were given awards for how they conducted themselves before and after Lauren’s death. When confronted about the awards that were given, Chris Nelson, spokesperson for the U, said that these awards “were not meant to be self-congratulatory to the department’s handling of the McCluskey case … I viewed it as just an attempt by the Department of Public Safety to better recognize the important work they’re doing.” Yet, a student who needed their help, who they were supposed to make sure was safe, is dead.

Lauren and her mother Jill both contacted the campus police multiple times to express concern for Lauren’s safety and the police were well aware of the threats that Lauren was receiving. Yet they claimed that because there was no “direct threat” coming from her killer, there was nothing they could do. But there was certainly something they could do. Lauren was being harassed, which means her killer was committing harassment (§76-5-106). Furthermore, abused women are five times more likely to be killed by their abuser if the abuser owns a firearm. Protecting students is the foundation of the job for campus police and the reason the department exists — yet the campus police ultimately and devastatingly failed to protect a student. Lauren’s preventable murder and the facts preceding it are clearly evidence of woefully incompetent leadership within the campus police department and the ineptness of the specific officers on staff.

The detective who was assigned to Lauren’s case was off duty during the time of her murder. What is astonishing is that no other officer was assigned to handle the case in the detective’s absence. Work of this magnitude and importance cannot be left unattended simply due to staffing schedules, as if it were a routine accounting report with no particular deadline. A person’s life and safety was on the line. Time was of the essence. The fact that there was no effective protocol in place to ensure that the casework would continue in the officer’s absence is yet more damning evidence of failed leadership in the campus police department.

It wasn’t only the police who failed to protect Lauren. University housing employees must also share the blame. Lauren’s friends went to housing staff, appealing for help for their friend who they knew to be in danger. Housing is responsible for the well-being and safety of their resident students, but their inaction and weak excuses show that a crisis of leadership and dearth of protocols are not unique to the campus police department. In fact, the university-wide problems of failed leadership, inaction in the midst of crisis and protocol-free anarchy are encapsulated in the allegations contained in the lawsuit filed by Lauren McCluskey’s parents that states, “housing employees rarely called campus officers because of a general feeling that they ‘were often unhelpful and their tactics were routinely counterproductive.’”

While the university claims that they did everything they could, an independent review said multiple steps could have been taken to prevent Lauren’s death. The review also gave recommendations as to how the university can take meaningful action to make sure a tragedy like this never happens again. Given the lack of leadership, inability to protect students and culture of denial and defensiveness — demonstrated by University Police Chief Dale Brophy and President Ruth Watkins — there is little hope that those recommendations will be followed effectively.

Lauren is dead and the university has a laundry list of inadequacies it must address. First, Chief Dale Brophy needs to be fired. The fact that male campus police officers urinated in a female officer’s work bag on more than one occasion bespeaks of an undisciplined workforce, made up of uncaring, unprofessional and incompetent officers. Officers of such demeanor would only engage in such activities if they assumed there would be no consequences for their actions. The only way they would make such an assumption is if their chief was also uncaring, unprofessional and incompetent. The officers that mishandled the case — everyone who took reports from both Lauren and Jill — also need to be fired. They all failed in the most critical responsibilities of their jobs.

The university also owes Lauren’s parents an apology. Of course, an apology will never replace the loss of life. However, it is still something that needs to be said. The university needs to apologize for denying this truth to Lauren’s family and friends, and it needs to remove campus staff that failed to do the job of protecting students’ well-being.

The university is now facing a lawsuit from Lauren’s parents. At this point, this is what the university deserves. The administration has failed to take responsibility for their inaction. This has forced Lauren’s parents to seek justice on their own, and rightfully so. However, they should not have to go through the legal hoops that the university has forced upon them in order for them to seek justice for Lauren. The university, administration, campus law enforcement, housing office and President Watkins should feel ashamed for their inaction and for their refusal to accept accountability for that inaction. The lawsuit is justified and necessary.

While Lauren’s death occurred in the fall of 2018, its impact is far from over. Nor should it be over. When a student is murdered on their own campus, outrage, sadness and frustration should be expected. Lauren cannot be forgotten. It is obvious from the evidence that Lauren was not in a healthy place. The university failed to protect her and, as a result, Lauren is dead.