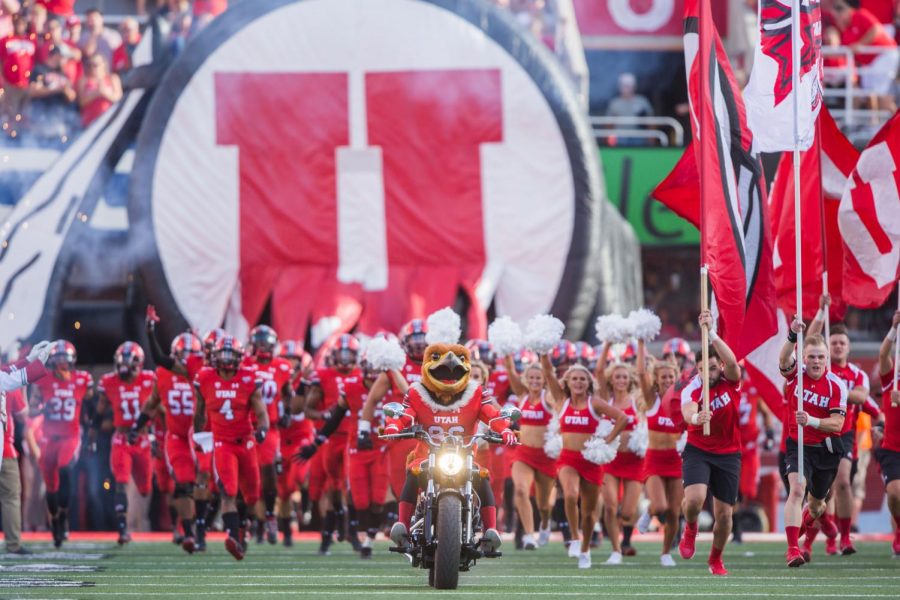 The University of Utah football team marched onto the field during the NCAA football game vs. Weber State at Rice-Eccles Stadium in Salt Lake City, UT on Thursday August 30, 2018(Photo by Curtis Lin | The Daily Utah Chronicle)

The sky’s the limit for the University of Utah football team heading into the 2019-2020 season. After clinching their first Pac-12 South title last season, all eyes will be on the Utes to repeat in the South and make a run towards their first conference championship and a trip to the grandaddy of them all, the Rose Bowl.

The Losses
While the team had major gains last season, there were key losses for the team as well, the biggest being the departure of both Mitch Wishnosky and Matt Gay who were members of a specialist unit that is considered the best in the nation. Utah also lost a stud linebacking duo of Chase Hansen and Cody Barton who took their talents to the NFL.  On August 29th, there are key pieces of the team from last year that won’t be taking the field.

The Newbies
Despite the losses, the team still has many members of the team coming back, whether it be from injury or deciding to come back for their senior season.

The Utes will also add some new faces that fans should get to know sooner rather than later, including junior offensive lineman Bamidele Olaseni, who is expected to be a starter on the line. Francis Bernard will take the other starting spot. The Australian punter pipeline brought the team another punter from down under, Ben Lennon who will replace Ray Guy award winner Wishnosky.

Fans will also be seeing new faces on the sidelines come this August. Andy Ludwig is returning to Salt Lake to coach a Tyler Huntley led offense to a potential title. With the departure of both Justin Ena and Gary Anderson on the defensive side of the ball, Kyle Whittingham had to make moves. He found two coaches who were more than ready to fill those vacancies. Sione Po’uha is coming back to the school where he won a Fiesta Bowl. He will take over the defensive line, which has multiple players that NFL scouts will have their eyes on all season. Colton Swan will be replacing Justin Ena who had been on staff since 2015. Swan spent the last fourteen years at Weber State.

Breaking Down the Schedule


Aug. 29 @ BYU
One thing you can guarantee about the Holy War is that it is bound to be memorable, whether it be a blowout game like in 2011 or a comeback for the ages like last year. This year’s meeting will be the 100th between the two schools and it will be a showdown. The amount of smack-talk being thrown around between the two teams this off-season is setting up for a game for the history books.

If Utah can take the momentum that they had in the last quarter of last year’s game and start off hot, BYU won’t stand a chance. Utah might have some struggles with it being the first game but they should be easy fixes during the game.

This game will be closer than some may like but Utah will still get the win and give us the #Divine9.

Sept. 7 vs Northern Illinois
Last year when these two teams met in DeKalb, it was a hard fought battle on both sides. While Utah ended up getting the win, it was dirty. In this year’s meeting some of the familiar faces who impacted the game won’t be present. Hansen who had the pick 6 that sealed the game for Utah is in the NFL and NIU’s stud linebacker Stutton Smith who had two sacks and 4.5 tackles for loss is also in the league.

Sammy’s prediction: Utah will win this one in Salt Lake 31-10.

Sept. 14 vs Idaho State
This should be a tuneup game for the Utes, but it is one of those games that could be a trap. If it becomes a huge blowout, I hope Whittingham will take the starters out and give the second and third string guys some playing time.

This should also be a big game for Zack Moss to get major yardage so that he can try and break some records.


Sept. 20 @ USC
Other than BYU, this will be the first test that the Utes will face this season. While USC looked like a dumpster fire at times during the season last year and even during parts of the postseason, they are a wildcard. You never know what you are going to get from them. Utah hasn’t won in LA since joining the Pac-12, and this might be the best time for the team to do it. Once Utah can get past the Trojans, the path to be the south champions shouldn’t be that hard. This game is going to be a nail biter for both sides, but Utah will edge out the Trojans to get their first conference victory.

Sept. 28 vs Washington State
The Cougars have had the Utes’ number since 2013. This years team will want to get the win after a disappointing end to the meeting last year. Washington State will look different without Gardner Minshew under center and how will the rumored starter of Gage Gubrud take on the air raid offense that Mike Leech has become known for. This will be a big game for the Utah secondary and my eyes will be on Julian Blackmon and Jaylon Johnson the whole game to see what plays they can make to change the whole game.

This will be a high scoring game for both teams. While I have faith in the Utah secondary to make some big plays to break up potential touchdowns, there will be a few that get past them. Washington State in the past hasn’t been the best team when it comes to stopping the run, but over the past few years they have gotten better, only struggling last year to contain Washington’s Myles Gaskin, as well as Moss and Tyler Huntley.

Oct. 12 @ Oregon State
This is yet another game the Utes shouldn’t take for granted. While Oregon State hasn’t been the best team in the conference the last few seasons, these are the games that can trip a team up.

Coach Whittingham does a good job at making sure the team focuses on one game at a time, especially when the next game is a big one. The Utes will march into Corvallis and take care of business against the Beavers.

Oct. 19 vs Arizona State
The Utah-ASU game has been one that fans either look forward to or dread annually. Last year’s game was less than ideal for Utah fans. The Utes saw Huntley go down with a season ending injury as well as some problematic calls on both sides of the ball. The last time Utah beat the Sun Devils in Salt Lake was in 2015 and since that game the Utes have only come out on top one other time.

Some of the key Sun Devil players who have impacted the game won’t be in play this season which should relieve some fans. Both N’Keal Harry and Manny Wilkins won’t be suiting up for the team. They still have an offensive weapon in running back Eno Benjamin, but given Utah’s past with stopping the run, he shouldn’t be too much of a threat.

This game will come down to sloppy play coming from both sides, and maybe a missed call or two from the officials. Once Utah beats ASU, the south championship will be all but sealed for the team.

Oct. 26 vs Cal
The last time these two teams met was in 2016 where the Utes rallied from a 14 point deficit but were stopped at the goal line on a last second play to win the game. Cal has been on the up swing since then, but the power Utah has on both sides of the ball should be enough to overpower the Golden Bears.

This game is going to be a defensive struggle but the Utes will come out on top.


Nov. 2 @ Washington
This will hopefully be the first time that these two teams meet this season. Utah has only beat the Huskies once in all the times that the two teams have met. Washington is replacing 10 out of the 11 starters on their defense and a handful more on the offense including quarterback Jake Browning and running back Myles Gaskin.

Washington is a hard team to face at home, and while I think this game will be a hard fought game, Utah will suffer their first loss of the season at the hands of the Huskies.

Nov. 16 vs UCLA
Last season was less than ideal for the Bruins, and finishing the season 3-9 was the worst the team has finished in a few years. Utah has had their way with UCLA for the last few seasons and this year won’t be any different.

Nov. 23 @ Arizona
In their last road trip of the season, the Utes will head down to the desert to face the Wildcats. Historically, this game has either went one of two ways: a blowout for one of the two sides or a close game. This year’s game will be different. It won’t be a huge blowout like last year, but it will be closer than it has been in the past. Second year head coach Kevin Sumlin has better understanding of his players and his players know what to expect from him.

Nov. 30 vs Colorado
The regular season will end with the Utes taking on the Buffs. Under new head coach Mel Tucker, the Buffs will be coming off a senior day loss against Washington. The Utes will want to send their senior class off on a high note and take down Colorado for the third time in a row.

This article was originally published in print on Aug. 5, 2019. Since being published online, this article has been updated to reflect the fact that Manny Bowen is no longer a member of the U’s football team.