No. 14 Utah Football to Open Season Against BYU 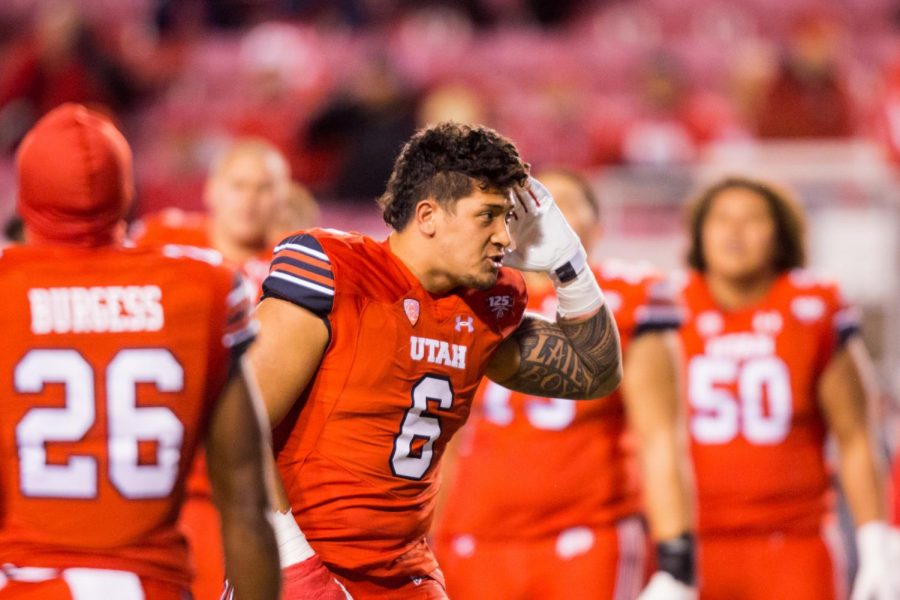 University of Utah junior defensive end Bradlee Anae (6) fired up the team prior to the start of the BYU-Utah Football Game in an NCAA Football game vs. BYU at Rice-Eccles Stadium in Salt Lake City, UT on Saturday November 24, 2018.(Photo by Curtis Lin | Daily Utah Chronicle)

By Sammy Mora and

Football is finally back for the No. 14 ranked University of Utah Football team. The team is set to open the season in Provo for the 122nd meeting between BYU and Utah. Both teams are looking to build on good seasons from last year. This year’s game will also be the first time since 2009 that BYU has faced a ranked opponent the first week of the season.
Scouting Utah

The sky’s the limit for the Utah football team this year. The preseason hype is more than ever before with national writers projecting the Utes in the CFB Playoffs facing the likes of Alabama and Clemson. Utah just wrapped up fall camp and resolved a few question marks that were present during spring ball. The team is looking to bounce back after suffering a rough loss to Northwestern in the Holiday Bowl last December.

The offensive line is set with Johnny Maea at left guard, Darrin Paulo at left tackle, Orlando Umana at center, Braeden Daniels at right tackle and Nick Ford in the right guard position.

While the kicking game hasn’t been fully solidified, it looks like UCLA transfer Andrew Strauch will be taking the kicks for the team on Aug. 29th.

The Utah linebacker core looks to also show the fans what they are made of after grad transfer Manny Bowen abruptly departed the program the week before fall camp began. Both Francis Bernard and Devin Lloyd will be filling the shoes left by Chase Hansen and Cody Barton last year.

Both Tyler Huntley and Zack Moss will make their triumphant return to the Holy War after missing last season’s game with injuries.

Scouting The TDS
The Cougars are coming off a 7-6 season which culminated in a victory against Western Michigan in the Idaho Potato Bowl, 49-18. While the team has key pieces coming back like quarterback Zach Wilson, there are also parts of last year’s team that won’t be on the field this year.

Defensive end Corbin Kaufusi and linebacker Sione Takitaki won’t be lining up on the BYU defense this season. Both players are making waves with their respective NFL teams. Wide receiver Neil Pau’u also won’t be suiting up for BYU. Pau’u was suspended for the entire 2019 season for a DUI charge that arose in June.

Wilson, who had offseason shoulder surgery will have some familiar faces to throw to in wide receiver Aleva Hifo and tight end Matt Bushman this season. He will also have options in wide receiver Gunner Romney and wide receiver Micah Simon.
Watch this
Players from both teams are on multiple preseason watch lists:
Dodd Trophy: Kyle Whittingham

Golden Arm: Tyler Huntley
Where to watch
The game is set to kick off at 8:15 p.m. on Aug. 29 at LaVell Edwards Stadium in Provo. The game will be televised nationally on ESPN.