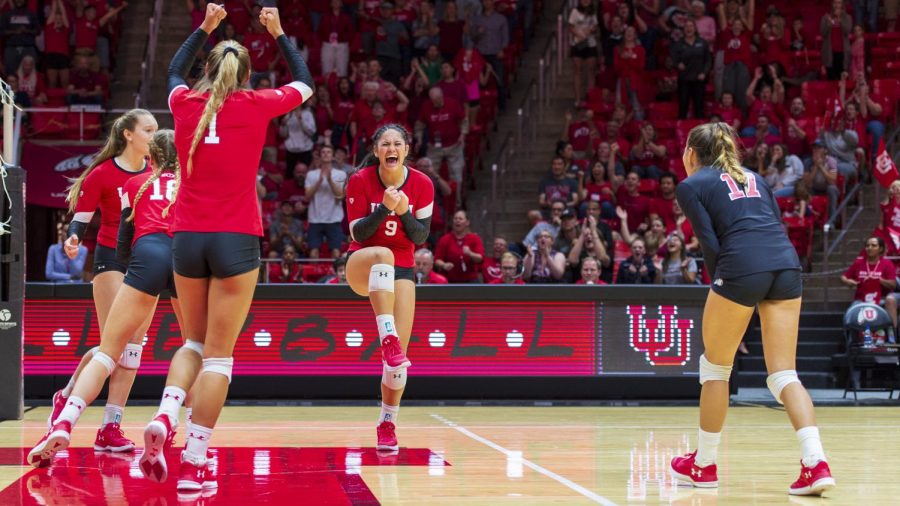 By Mallory Arnold and Casey Overfield

The University of Utah volleyball team started off the season on a high note, taking wins against all three teams that they hosted in the Utah Classic tournament.

The Utes started off the weekend against Saint Mary’s, where they won in three sets.  The team ended the game with 41 kills and a .223 hitting percentage. While the team only delivered three aces, they made 15 blocks. The match ended with the Utes scoring 59 points and Saint Mary’s with 50.

Utah was led by Juniors Kenzie Koerber and Dani Drews. Koerber put up 14 of those 41 kills, while Drews made 10. Both players were also helpful on the defensive end where Koerber had five blocks and Drews had three. Koerber also had one assist.

“Today was a really good team win, everyone contributed and everyone stepped up in their roles.” Drew said. “It was really good for us to start our season off like that.” Only 18 errors were made by Utah, while SMC had 23.

Redshirt freshman Sarah Stephens was able to start the game with her first day in a Utes uniform. Stephens is a local from Salt Lake City who attended Skyline High School. “It’s an amazing feeling being able to start today being from here, you can never replace the feeling,” she said. Other freshmen who were able to get on the court were Leah Schmidt from Westlake, Ohio and Shkhinah Tindsley from Tracy, California.

“The most important thing I learned today was coming together as a team. This team definitely builds off one another and we came together as one,” Stephens said. She had one assist on the day.

The Utes closed up day one of the tournament with a sweep of No. 7 Kentucky.  Utah recorded 35 kills and 51 points in three matches.  They out blocked Kentucky 13-5 and had only 14 errors compared to 30 from the Wildcats.

“This match was for sure a team win,” Oblad said to Utah Athletics.  “Everyone wanted that and played their role and we got it done.”

On day two, Utah faced off with their final opponent of the weekend — No. 23 Cal Poly.  After five sets, the Utes came out victorious with a score of 3-2. This weekend’s results mark the first time that the team has started off their season with wins against two ranked teams.

Koerber, the tournament MVP, had a career high 19 kills against the Mustangs, and she also tallied 15 digs and five blocks. Drews recorded 20 kills, and Oblad contributed 10 blocks to the win.

The team battled back and forth with Cal Poly through all five sets, and the numbers showed how close the competition was.  Utah’s hitting percentage was .154, while Cal Poly’s was .124, and the Mustangs had nine aces compared to Utah’s two.

Utah closed the game with a kill from Drews, and the Utes walked out of the weekend with three victories against three good teams.

The Utes will travel to Logan on Tuesday, Sept. 3 to take on Utah State before competing next weekend at the Wolverine Classic in Orem, Utah.