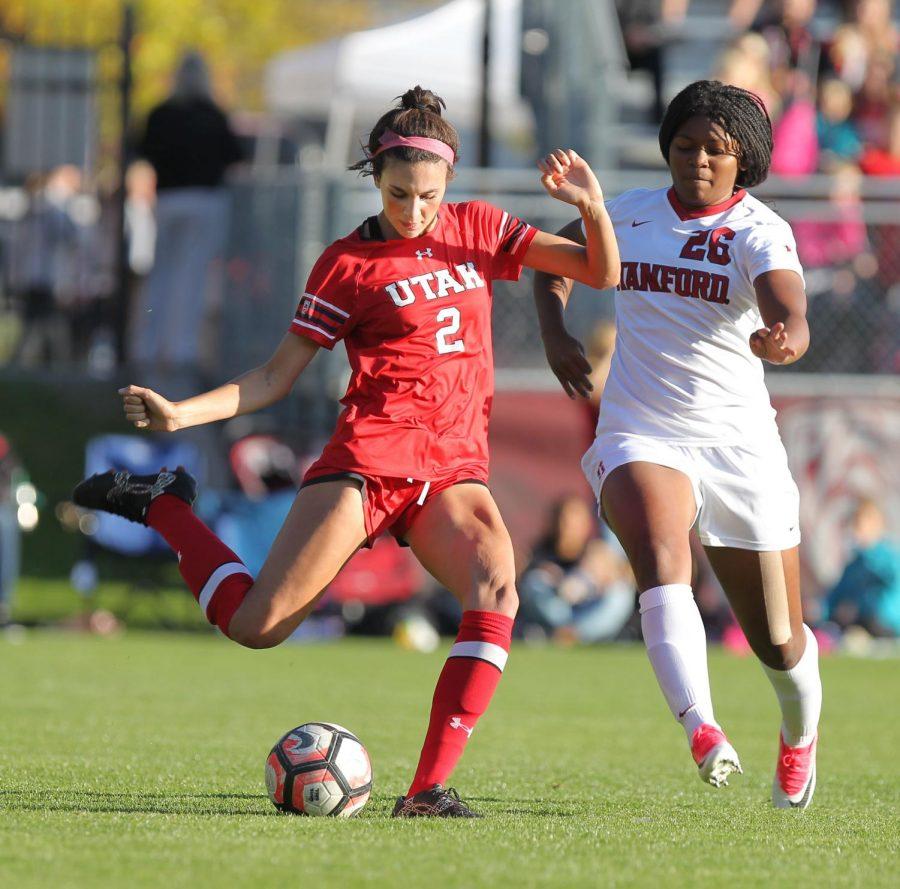 Tavia Leachman plays one on one with a Stanford player during a match. (Photo: Utah Athletics)

Sports and family are two of the biggest motivators for the University of Utah soccer’s Tavia Leachman. After being sidelined for a part of two seasons at the U, Leachman’s strong familial foundation has helped her remain strong and come back healthy for her senior year.

Before coming to Utah, Leachman was named one of the top 150 players in the nation.

“Being named alongside some of these players was a cool thing that made me feel like I had accomplished a lot,” she said. “I knew a lot of the players that were on the list. I had known them from playing with them or playing against them and I had looked up to a lot of them, so it was cool to be named alongside them.”

Whether it’s soccer or academics, Leachman’s work ethic is evident.

Tavia’s father Scott said, “One of the things that I’m most proud of with Tavia is her hard work. She’s always been a hard worker and her hard work is paying off.”

One of the ways Leachman’s hard work has been apparent is when she made the US Women’s U-23 National Team as a freshman in 2016.

Now heading into her senior season, Leachman’s efforts are continuing to pay off for the Utes. Being a starting center back all four years on the hill, she has notched two assists, one goal and countless clearances helping lead the Utes to two winning seasons in her three years so far. Leachman’s defensive prowess also has helped her receive conference recognition earning a Pac 12 All-Freshman Team nod in 2016.

Leachman played in the center back position for most of her life, but she wasn’t always a defender growing up. In high school, she played forward. The defense has a grasp on her heart, though, as she’d much rather save a game-winning goal than score one.

Tavia’s mom Debra said, “When she was five years old, she was outside rolling the soccer ball off the roof and was practicing heading the ball.” Debra continued, “She used to tell me, ‘Mommy, I love to play in the back. Not in the goal, but the girl that stands in front of the girl that’s in the goal.’”

For the Leachman family, sports are a family affair. Debra even entered into retirement to travel with the team and enjoy her daughter’s senior season at Utah. Thankfully, Utah is only a short flight away to where they can still come out and watch games, plus they have the benefit of seeing Tavia play USC and UCLA every year where they don’t have to travel too far from home for games. 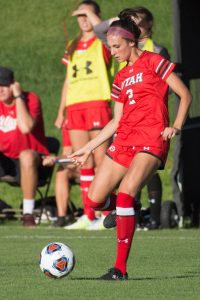 The family has played a major role even down to the simple intricacies of Tavia’s game such as her jersey number. When Tavia was young, she wanted to be number nine because of U.S. Women’s National Team star Mia Hamm. Her older siblings had something to say about that, though, talking her into being number two because both of them wore the number on their respective teams. Except for her high school team where she wore 22, Leachman has worn number two her whole life.

One of the toughest decisions Leachman has had to make was to leave her home in California to come to Utah.

“I knew that I wanted to leave, and I think that if I didn’t branch out now, I don’t think I would have ever left,” she said. “When I was looking for schools to go to, I wanted to go to one with a big conference and a great atmosphere feel to it, and Utah had it all.”

In her time away from soccer, Leachman enjoys taking trips back to California beaches where she can go body surfing with her family.

“This past summer I went super far out to go body surfing and there was a pod of dolphins that were swimming around me,” Tavia said. “Everyone started to scramble because they thought they were sharks, but I was excited to accidentally swim with some dolphins.”

In her final season on the pitch for the Utes, Tavia is looking forward to enjoying every moment and having fun. As one of her two biggest fans in the stands, her mother leaves one big piece of advice for Tavia: “Stay healthy.”

Leachman is aware that soccer isn’t the only part of college, and is currently going into human development and family studies and hopes to become an occupational therapist once she’s done with grad school.

Be sure to watch for number two patrolling the defensive backline as the Utes return home this season.