No. 13 Utes Take Down Northern Illinois in Home Opener 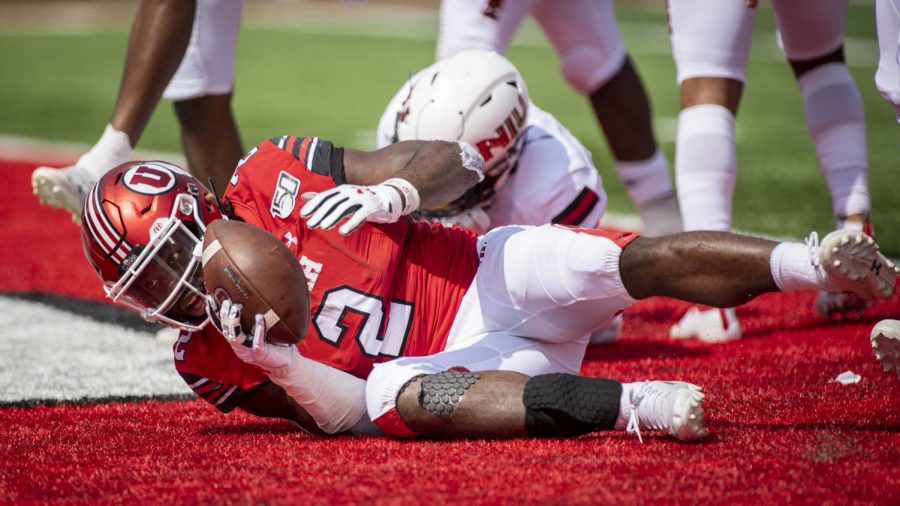 After a slow start in the first quarter, the No. 13 University of Utah Football team rallied to defeat Northern Illinois 35-17, on the efforts of two Zack Moss touchdowns and some big defensive plays.

NIU was the first to score in the first quarter after graduate transfer quarterback Ross Bowers went airborne on a nine-yard scurry that lead to a touchdown.

Utah was quick to respond on the next drive, as Demari Simpkins scored on a 13-yard fly sweep to tie the game at 7 with 13:41 left in the first half.

On the proceeding Utah drive, senior quarterback Tyler Huntley scored on a 16-yard rush that gave Utah their first lead of the game. NIU quickly responded with a 74-yard touchdown that tied the game back up at 14 with just under 8 minutes left in the second quarter.

The trifecta Hallandale Trio touchdowns was completed when Moss dragged three defenders with him into the endzone with 2 minutes left in the half. The final score of the half came off an NIU 46-yard field goal. 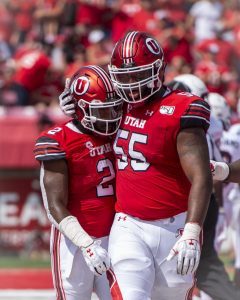 Head coach Kyle Whittingham said that the team benefits from having three members with a long history of working and playing together.

“Those three guys are terrific — they’ve been great teammates and team players since they got here on day one. They’re disciplined, they’re talented, they work hard. I can’t say enough good things about those guys. They’ve done everything we hoped they would have done and more since they’ve been here,” he said.

“We’ve all scored in one game before, but I don’t think we have all ran for one before … It was really cool to see everyone get in the end zone [during] the first game back inside Rice-Eccles,” Moss said about sharing this moment with his former high school teammates.

It really was a tale of two halves for the Utes. In the second half, the Utah defense held NIU to their own side of the field in four of the their five drives. Even in moments when NIU looked like they might make a run for more points, the Utes held strong.

The first points scored in the second half came off a five-yard rush from Moss in the third quarter. Sophomore Jaylen Dixon finished off the scoring in the fourth with a 14-yard pass from Huntley. Julian Blackmon intercepted Bowers in the fourth quarter to set up the Dixon score.

The Utah defense played lights out in the second half. Along with the Blackmon interception, senior Bradlee Anae had two sacks, one of which was a strip sack recovered by NIU.

After letting a few big plays slip through in the first half, Anae says the defense came out with a whole new attitude in the second that led to their strong performance.

“We were more pissed off. They scored on their first drive in our stadium and we were ticked off. We wanted to play harder as a unit,” he said.

According to Julian Blackmon, having such a strong defensive line makes his job in the secondary a lot easier.

“Playing behind a defensive line like that makes it easier. The quarterback has to get the ball out and that is why we get our picks. That and the defense of Josh Nurse. We get our picks because of their effort,” he said.

When it was all said and done, the Utah offense accounted for 407 total yards. Huntley was 14-19 for 214 yards. Bryan Thompson led the team in receptions with 66 yards, one of which was a 38 yard pass from Huntley. Moss only added 80 total yards in his campaign towards being the all time leading rusher.