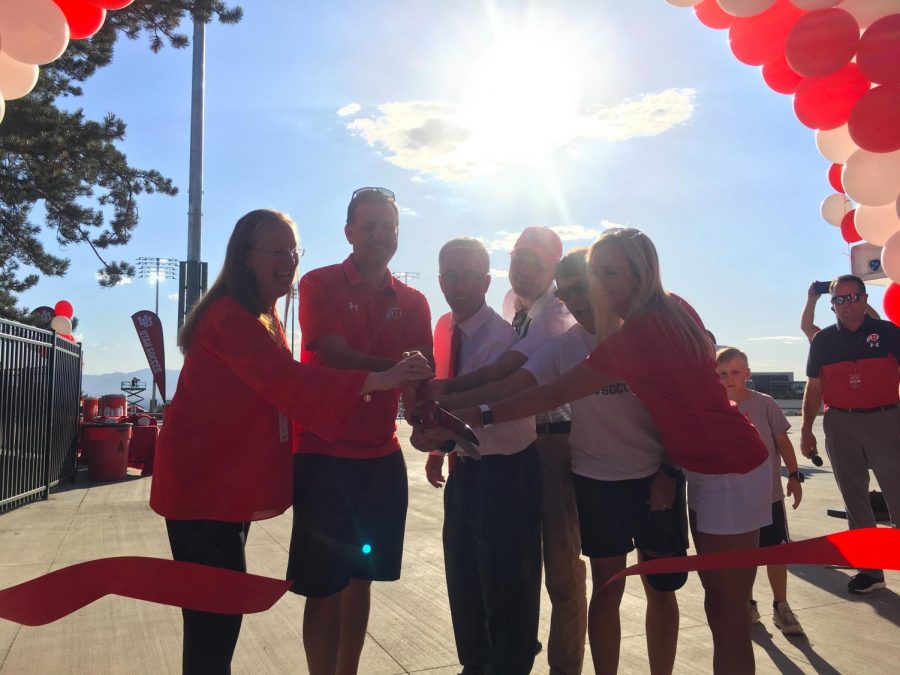 Fully remodeled and views for days. This may sound like an advertisement for a newly built home, and in many ways, that is what we’re talking about. The new home of both University of Utah Soccer and Lacrosse.

Ute Field finished construction in August, located just northwest of the Student Life Center. The old field was simply not enough for a high-level university in a power conference facing elite competition. Fortunately, Ute Field steps up for all of that and more.

Probably the most-talked about feature of the new field is the incredible view. According to Tanner Nilson, a member of guest services at the field, “The view is what’s changed the most. The old field had buildings behind it.”

This sentiment was echoed by KeAndria Newingham, lead ticket taker for Guest Services, who had worked games at the previous field. “It was more like a high school field,” Newingham said.

The view from the new pitch is spectacular. Between the beautiful new green grass on the field, and the mountains behind it, the experience may well be worth the admission price in and of itself.

Another huge upgrade that will benefit everyone attending the games is the concession stand. There were no official concessions at the previous field. Granted, tables could be set up to provide snacks, but it wasn’t a consistent aspect of the experience. The new field comes equipped with one set behind the field, filled to the brim with candy and food to snack on throughout the game. Small changes like this can sometimes make all the difference for fans. During the field’s inaugural game, this new permanent fixture appeared to be a hit.

Many more fans can come and enjoy the sports played in the venue now as well, as the seating capacity has increased to 900 fans, with room for another 300 to 600 to sit on the grass.

“We only had about one-fourth or one-half the amount of bleachers at the old one,” Newinham said about the expanded seating.

During the first game played on the field on Aug. 30, the bleachers were filled to capacity with many more fans comfortably seated on the grass alongside the field. The fans already filled all of the new bleachers and then some, proving that the new seating was a necessity.

The grand opening of Ute Field was attended by many, including Athletic Director Mark Harlan. He gave opening remarks, noting how this field was put together through a collaborative effort, and was completed remarkably fast. He also talked about how the upgrade was important to benefit the program moving forward, and this sentiment was repeated by other speakers following him.

It is remarkable to note how quickly the field was constructed — though not yet entirely completed. There is still minor construction happening in certain areas of the field, but the main ingredients are all there. Although planning for the new field had been in progress for quite some time, the actual construction took only months to become functional.

The field was announced by former Athletic Director Chris Hill in June 2017. This was part of a master plan to both create more rooms for on campus housing and a better experience for the athletic teams that the field would serve.

The old field was taken over by student housing to allow more students access to campus living. Considering it’s only been two years and change since that announcement, the field was successfully moved and constructed in a very short amount of time, making true Hill’s statement that it would happen at “warp speed.”

After the ribbon cutting, fans experienced a multitude of festivities before the game, including face painting and a photo booth. Water and huge cookies were arranged on a long row of tables, and the event was graciously catered to by J-Dawgs. Free t-shirts and flags were also given out to families and students alike to help boost fan participation and engagement. As the hour before the game progressed, the arena began to fill until all available bleacher seats were taken.

After the Utes’ win at their inaugural game on the new Ute Field, Coach Rich Manning stressed the importance of making this new field feel like home. The team had not had a real field since November of last year, and finally having somewhere to call home permanently will surely improve the morale of the team and the fans.

If the previous game was any indication, the Utes may have found good luck on the new field as well, as they swept Utah State 3-0. It was a dominant performance, punctuated by loud cheering and consistent support from fans in attendance. It’s a remarkably tranquil location for a field, and lends itself to wonderful gatherings of sports fans.

As dusk rolled into night, the new lights illuminated the field fully and completely. It was like daylight on the field, and not a single pass could be missed. After the win, the crowd was dazzled by an exceptional display of blinking lights to celebrate the win. It was just another of the amazing features to be seen and enjoyed at the new field.

The win of the USA Women’s Soccer Team at the World Championship boosted interest in women’s soccer. The sport is growing and it’s important to have growing facilities to accommodate this interest. As well as soccer, lacrosse is gaining momentum across the west coast, and this home for both sports will benefit the programs and be a tremendous service to both players and fans.

This article was originally published with a misattribution of the where the field is located in relation to the Student Life Center. We regret the error.