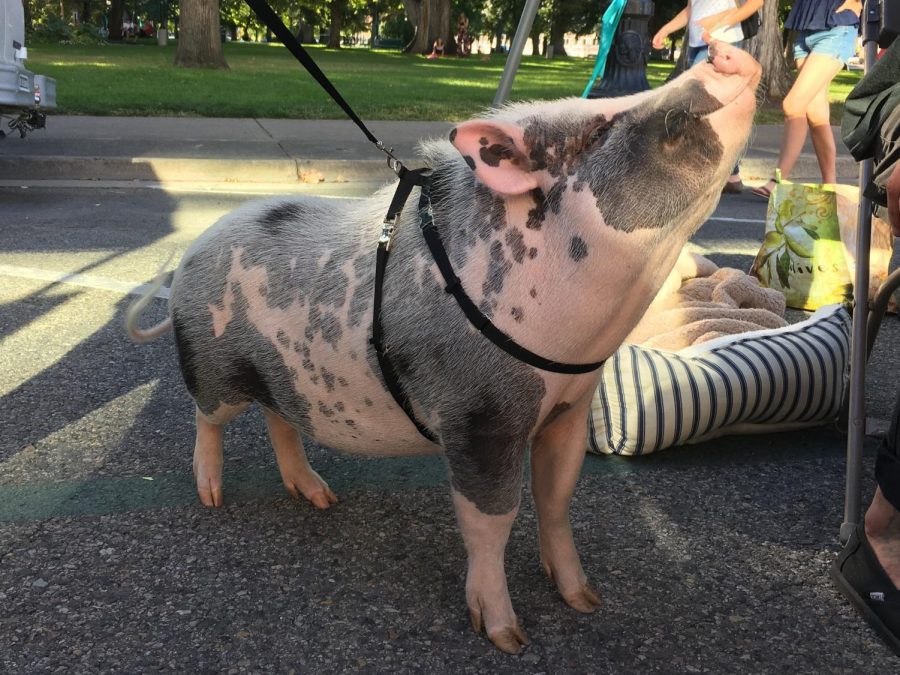 It’s a bright and blue day at Library Square as a toasting sun warms one of the year’s last summer weekends. The festival has attracted a wide assortment of people from around the state. Looking around, a man passes in what resembles a NASA shirt, except it says “VEGAN” across it. Another woman joins a cooking demonstration with a California Republic shirt, or rather the design with “plantpower” as the text and a rhino in lieu of a bear. Everything looks familiar at first glance, between the vendor tents and live music, but everybody has gathered to turn a standard on its head. Every year, Salt Lake City VegFest, put on by the Utah Animal Rights Coalition, fills itself with delicious vegan food, animal rights groups and panels to create discussion around this complex movement.

The Vendors
Believe it or not, despite the prevailing image of the vegan, many vegans have different marks to distinguish themselves from each other. You might not see vegans hugging trees, for example. Yes, that mark might be a punny plant-based shirt, but it’s inspiring to see such an eclectic group of people gather for the same purpose — reducing the consumption of meat. Looking at the variety of vendors, that imperative takes on a spectrum of shapes and sizes. Each has its own way to upset the established American diet.

Many of the vendors engage in animal rights activism in one way or another. They have differing opinions — some lead strictly by example, like the Ching Farm Rescue Sanctuary, while others want to raise awareness, provide demonstrations and actively fight against the meat industry, like Direct Action Everywhere. Both styles seem to maintain the idea that you shouldn’t “push it.” There’s a difficult tension in trying to raise awareness for something that you recognize has a significant impact on climate and animal suffering, while knowing that veganism tends to come across as judgmental towards meat-eaters. Many put their factual foot forward, passing on information about current events rather than justifying the vegan diet or citing Peter Singer. UARC, as an example, lays out their mission, like finding justice for animals at Lagoon, rather than simply voicing their complaints.

The Panels
“How do you tell the food bullies, stop eating meat and get to the veggies?”

The “Plant-Based Utah’s Health Panel” featured such questions like this one from 13-year-old Jesse Pitman. “We need to build bridges not burn them,” one of the panelists, Danielle Dinkelman, said in response to him. Dinkelman, a wellness coach, had an open Q&A with other panelists chef Heber Rivera and Martie Nightingale, a certified nurse-midwife who has taught many vegetarian nutrition classes. They responded to concerns, like the lack of protein in a vegan diet. Dinkelman believes that protein is commercialized so that when a doctor, informed by a self-interested industry, tells us we need to eat eggs, we believe them. Rivera agrees, saying that “We tend to categorize everything… and try to find that one thing that will help us. It’s not about a single thing, it’s about the whole.” In response to eggs specifically, he said, “See if you can survive without eggs for a week, a month, a year and see if you still need them.” The hypothetical about the chicken and the egg takes on a new meaning when we think about the cycle of hyper-production in the animal industry. The question doesn’t matter if one of them doesn’t survive.

Captain Peter Hammarstedt also spoke at the panel “Sea of Slaughter and the Fight to Save Marine Wildlife.” Hammarstedt described his organization Sea Shepard Global’s mission of “aggressive nonviolence” to actively disrupt illegal fishing and whaling. Sea Shepard’s tactics have included blocking Japanese fishing vessels and pursuing an illegal vessel for 110 days, which launched governments into action. Most recently, they’ve partnered with a number of African nations to protect critical points of biodiversity. Hammarstedt believes that that Sea Shepard is a “bridge between the vegan movement and the conservation movement.”

And, of Course, the Food
Probably the most represented part of VegFest, for good reason, is the food. Serving more purposes than food, they remind everyone that a vegan lifestyle doesn’t exclude people from eating out or having a variety in their diet. If anything, it’s a heads up that you might find even more diversity in your food when you look outside of the usual.

At VegFest you could find Falafel Tree, Huckleberry Grill and Garden O’Veaten in the way of food trucks. House of Tibet and Namash Swahili Cuisine also took a piece of the action. To dispel the myth that this grassroots movement only eats grass, Big O Doughnuts and Monkeywrench sold vegan desserts. This is only a small sample of the offerings — not to mention the beer garden. That’s right, having a good time is vegan.

This approach to highlighting a vegan diet is comforting, introducing new ways of life without asking for sacrifices of culture. The familiarity reminds us that this isn’t strictly a society of ’60s flower children — it is everyday life punctuated by empathy and global awareness.