Head to Head: The Daily Trojan 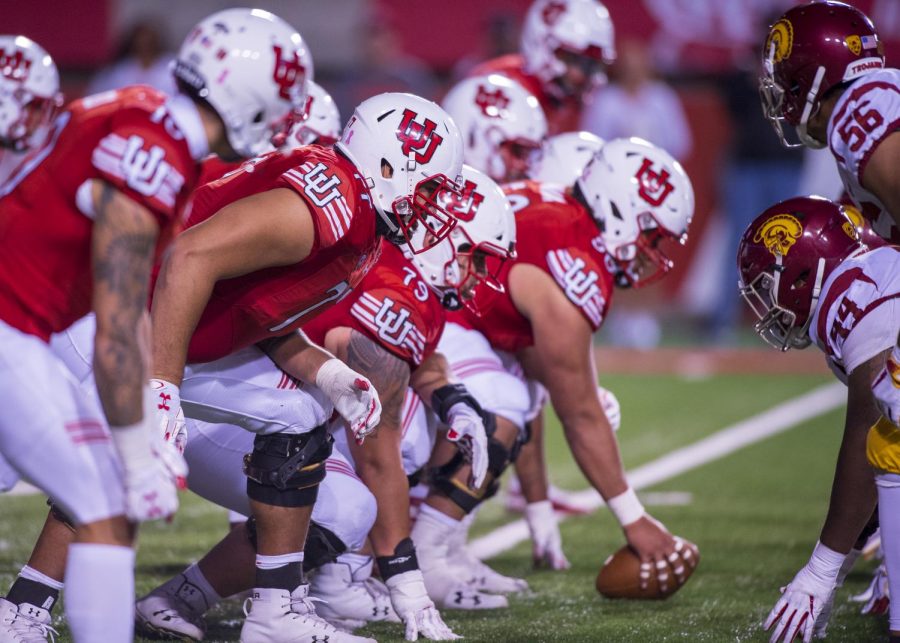 The University of Utah lines up before the snap during an NCAA Football game vs. The University of Southern California at Rice Eccles Stadium in Salt Lake City, Utah on Saturday, Oct. 20, 2018. (Photo by Kiffer Creveling | The Daily Utah Chronicle)

Conference play is finally here for the No. 10 University of Utah football team. I reached out to Nathan Ackerman of the Daily Trojan, USC’s student newspaper, to talk all things about the upcoming game.

Sammy Mora: Utah and USC have become somewhat of a rivalry in this conference. Why do you think that is?

Nathan Ackerman: I think the rivalry is because of the history between the two programs, especially recently. In the past few years, both schools have been near the top of the Pac-12 South, so that naturally creates a rivalry because their matchups always matter. Last year, Utah vs. USC was possibly the biggest game of the regular season for both teams, and that game had a huge impact on the Pac-12 South’s winner. I think that will be the case again this year.

SM: USC is coming off a tough loss to BYU. How do you think that will affect the way they play on Friday night?

NA: Hopefully the team can use the disappointing BYU game to play with a chip on their shoulder against Utah. They should already know how important the game is (the Daily Trojan ran an article before the season predicting the Utah game to be the biggest of the year), but hopefully, they feel they have something to prove after the upset. I was hoping they’d be able to use the BYU game to give them momentum going into Friday, but now I have to find a different way to put a positive spin on it. Maybe there is no positive spin, though. Clay Helton said after the game that they have no time to sulk and he’s right. Hopefully, they’ve put the BYU game in the past and realize that this is a new week.

SM: Both teams have a quick turn around. Do you think that will change either teams’ game plan?

NA: It probably won’t affect USC’s game plan too much. The coaches have talked about how they’re a finesse offense and not a power offense, and less physical play should make it easier to recover in a short week. Both teams know that this game will go a long way in deciding how the season plays out, so if there’s any fatigue remaining from the last game, there’s a chance adrenaline takes over and gives them all the energy they need to each play their own game.

SM: USC quarterback Kedon Slovis has struggled against a physical defense. How do you think he will take what he learned and put it towards the Utah defense?

NA: We’ll see. Slovis never really looked comfortable in the BYU game, and he made some poor decisions because of it. Coaches at USC have raved about his maturity, so he should be able to make the adjustments necessary against a tough defense.

SM: Who on the offense needs to have a big game for USC against Utah?

NA: Slovis. The offense is so much more effective when he’s on his game. He’s talked a lot about how his job is made easy by USC’s depth at wide receiver, so if he can make good enough throws to just let his receivers work, USC’s offense is that much more lethal. It will also open up the running game for USC, and if you’re looking for players a little more under the radar, a big game from Stephen Carr and Vavae Malepeai would be huge as well in making Utah defend against both the pass and the run. If Slovis is off, they’ll need guys to make plays on the ground, and those two could go a long way in keeping the Trojans in the game if Slovis has another game like BYU.

SM: Utah has a very two-dimensional offense. What does USC need to do to make them one dimensional?

NA: Pressure, pressure, pressure. USC absolutely needs to pressure the quarterback and finish tackles behind the line of scrimmage. Last week (and really all season), the Trojans have gotten decent pressure from the defensive line, but they have struggled to finish plays. Quarterbacks and running backs have been escaping tackles from multiple defenders far too often, and that can’t happen against a Utah offense that will make them pay for those mistakes. The defensive line is definitely the unit’s strength, as the secondary is somewhat shaky, so if they can’t make Huntley throw under pressure, it could be a field day for Utah’s receivers.

The Utes and Trojans will face off on Friday, Sept. 20 at the Coliseum.