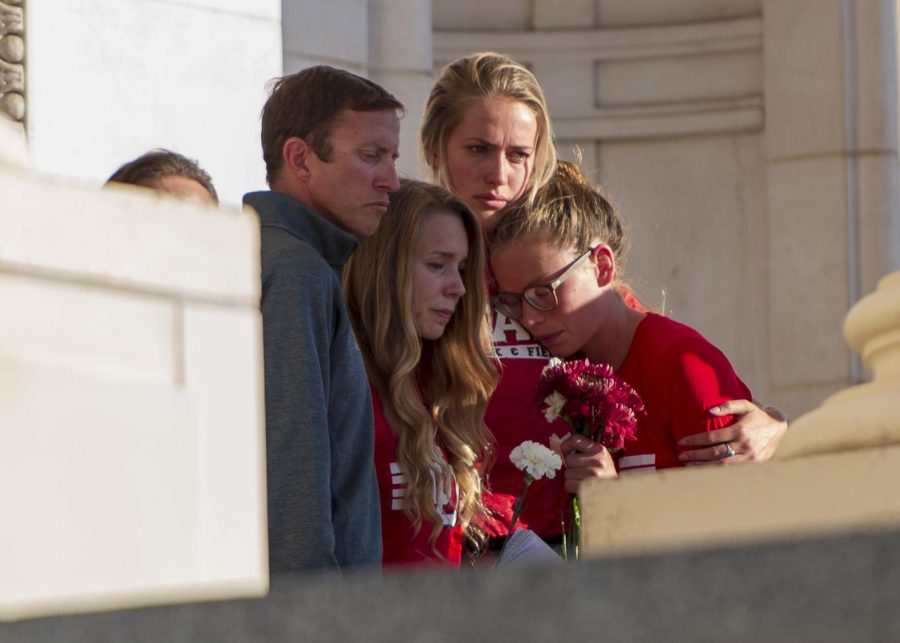 Students, staff, family and friends attend a vigil on the steps of the Park Building for Lauren McCluskey. Chronicle archives.

The Associated Students of the University of Utah has officially responded to ongoing controversy surrounding a lawsuit from the family of Lauren McCluskey, who was murdered on campus in October 2018.

The civil rights case aims to sue the University on the grounds of violations of Title IX, the Equal Protection Clause of the Fourteenth Amendment and due to Interest on Money Judgement. The University responded on Sept. 20 by releasing a statement asking the court that all charges be dismissed against both the University and its Police Department.

The most controversial language in this motion is found on page three: “The claims presented attempt to circumvent United States Supreme Court precedent establishing that the Constitution does not require police departments to protect persons in their jurisdiction from harm.”

Adding further fuel to the fire, The Salt Lake Tribune released an article on the motion that paraphrased the U’s argument by saying, “Officers had no obligation to protect McCluskey from her attacker.” This quote led to backlash from U students, especially those within ASUU.

A resolution denouncing the University’s language was created and began circulating through the student government. The assembly opted to pass the resolution. The resolution has not yet been heard in the Senate.

“Everyone I’ve talked to in the senate wants to make sure we are representing the students,” said Senator Devon Cantwell, who introduced the resolution. “It comes down to making sure that everyone feels comfortable and united in the language that we’re using.”

The University of Utah released a statement in response to the resolution claiming that this was a matter of miscommunication, and thanked ASUU for sharing their concerns. “In the motion, the university has not argued that its police have no responsibility to protect students,” said General Counsel Phyllis Vetter. “The motion to dismiss simply reflects current federal law which prohibits monetary judgements against the university and its officers under the circumstances in this case.”

Many members of ASUU still feel that the University is in the wrong, despite their claims of the motion for dismissal being a necessity. “Their response — obviously on paper it’s what they’re supposed to do,” said Assembly Representative Adrian Porras. “However, there’s many instances in history where what’s good on paper isn’t good in practice.”

The ASUU Senate had plans to meet on Sept. 26 to vote on whether or not to pass the resolution, though the meeting has since been postponed. “I have decided to vote in favor of cancelling tonight’s meeting, with the intention of calling a meeting next week,” said Senate Chair Damon Ngo in a statement sent to all other Senators. “I find this to be a compromise of allowing people enough notice to plan for a meeting of this much importance, yet not waiting three weeks to vote upon a resolution of this matter.”

ASUU will be holding a town meeting on Oct. 2, where they hope to further address the matter with the help of other U students. Interested students can attend from 2-3:30 p.m. in the Union East Ballroom.