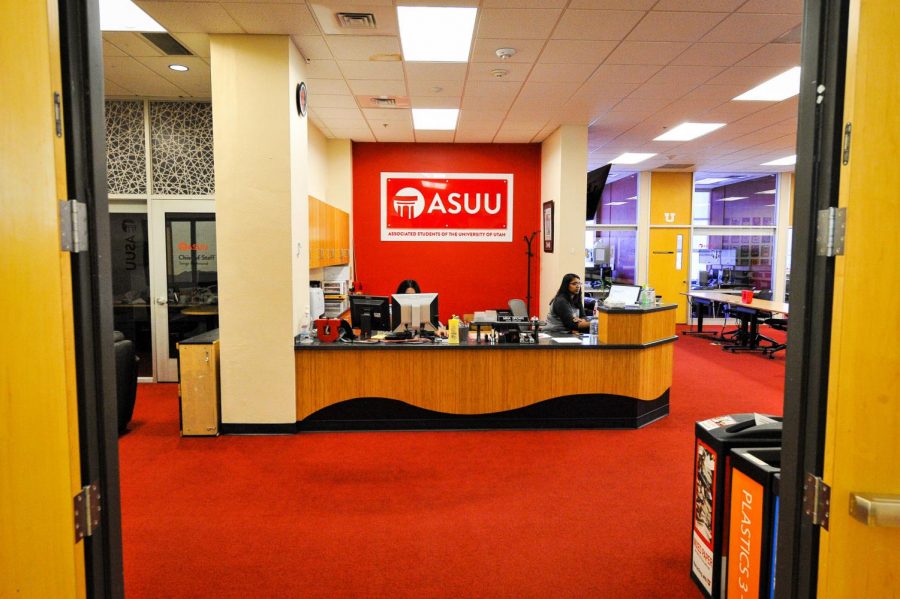 Laura Seymour and Mina Brown at the welcome desk at the ASUU offices in the Ray A. Olpin Student Union on the University of Utah Campus, Salt Lake City, UT on Thursday, July 13, 2017. (Photo by Adam Fondren | The Daily Utah Chronicle)

When University of Utah students hear ASUU, they often think of its different boards, the events they host and the student body president. While this is indeed the public face of ASUU, it only constitutes one-third of the organization. ASUU is a student government organization that mirrors our federal and state governmental structure with an executive, legislative and judicial branch. The presidency and its boards fall under the executive branch, but the legislative branch remains a mystery to most students.

The legislative is split into two bodies, with a smaller Senate representing the student councils of several colleges and the larger General Assembly that represents the student organizations and the student body at large. Both meet monthly in different legislative cycles to pass bills, which will later be sent to the president to be signed into action. While the Senate tends to deal more with their college student councils, travel and internal ASUU business, the Assembly weighs in on the financial needs of the student organizations brave enough to stand before them. The General Assembly can help fund organizations that aren’t directly supported by a college, don’t fall under a college to begin with, or don’t have the means to fundraise up to thousands of dollars from the community . For many students, it  is the only way of funding their organization or the event they’re trying to host.

To be fair to the Assembly, they don’t do a bad job. I attended a good amount of their Sept. 17 session myself and did not see a single bill fail. A bill could be passed in five minutes from proposal to vote, though some became caught in a 20 minute tug-of-war over what to cut and what to keep. Whether the passing of the bill is expedient or rocky, some version will pass. The Assembly cannot be easily taken advantage of nor is it piggy bank dispensing money to anyone who sends in a request, but it is dedicated to providing funding to student organizations if they’re in need.

That’s not to say that these student organizations found themselves fully funded after their bills pass in the Assembly. If a budget requests food, t-shirts or other expenses that aren’t integral to the operation, it will most likely find itself on the chopping block. Some organizations were asked to prioritize their necessities because not all of them could be funded.

One of the longer debates that I witnessed at the Assembly meeting had to do with the Beekeepers Association. The beekeepers requested a budget close to $5,000 to fund new beekeeping suits, honey extractors, updated equipment and bee t-shirts. Even though the most expensive items were arguably integral to facilitating a beekeeping club, they eventually had to cut their final total down to $3,000.

Despite the cuts, I found the Assembly’s determination to provide funding for every student organization to be rather incredible. They were wielding the responsibility of managing student fees to fund important and beneficial student organizations, but they often don’t have a large pile of money to work from themselves.

Redbook, the ASUU’s constitution, outlines the financing of different bodies in ASUU. Around 60% of the budget is outlined in minimum requirements with the Finance board determining where to distribute the remaining 40% in those internal bodies. Article IV Section 2.1.3 dictates that the Assembly should receive no less than 13% of the ASUU’s annual budget. Section 2.1.2 outlines 2% for the Senate, meaning that the legislative branch receives 15% of the student fees. This pales in comparison to the funding the executive branch receives, with 11% going to the executive cabinet as a whole and 18% to the Campus Events board alone. Altogether, it is nearly double what the student congress receives.

The Assembly’s reserves were at $159,577.19 at the start of the Sept. 17 session. This sounds like a lot at first, but this has to fund all student organizations on campus for the entire school year. If this were to be split evenly among all 516 organizations registered in Campus Connect, every organization would receive $309.26. If the average student tuition is around $8,500, the tuition of 19 out of the 33,000 students at the U fund the student run organizations. In this first cycle of legislation, the total amount requested was $77,551.53, with most bills averaging out at around $1,384.85. The Assembly still needs to meet five more times this academic year with that same budget, and it’s no wonder that it is forced to cut down student organizations’ budgets.

There was apparently some strife over this between the College of Pharmacy and ASUU last year, during which bills were consistently tabled. To avoid the confusion and conflict of the past, the different organizations under the College of Pharmacy submitted their entire fiscal year budgets to this session of the Assembly. Unlike the budgets of some more independent student organizations — like the Freeskier Society, who were able to secure $1,028 for a new canopy tent — the individual budgets for these organizations averaged around $500 for the entire school year, with the exception of the Academy of Student Pharmacists who requested around $1,500 with $850 set aside for diabetes awareness and flu vaccine kits.

The College of Pharmacy is a smaller college that can’t seem to fund these student organizations on their own, so they find themselves before ASUU. The leaders of these organizations had to come together with their representative Mustafa Tekarli to defend the budget of the College’s guest speaker luncheon series — where they host a specialist to speak to pharmacy students about their field of expertise — from having the food portion of the budget cut. The Assembly agreed to only cut some of the food budget, so long as the speaker series are made open to the larger student body.

ASUU should diversify more of these funds to the Assembly and back to us, the students. Frankly, it’s outrageous that the budget of the branch of our student government that funds all of our student organizations — as well as our college student councils — are shadowed by an executive branch board that couldn’t deliver on their expensive and high-profile RedFest event last year. Student organizations are integral to the student experience and they specialize in student success. Time to give them what they deserve.