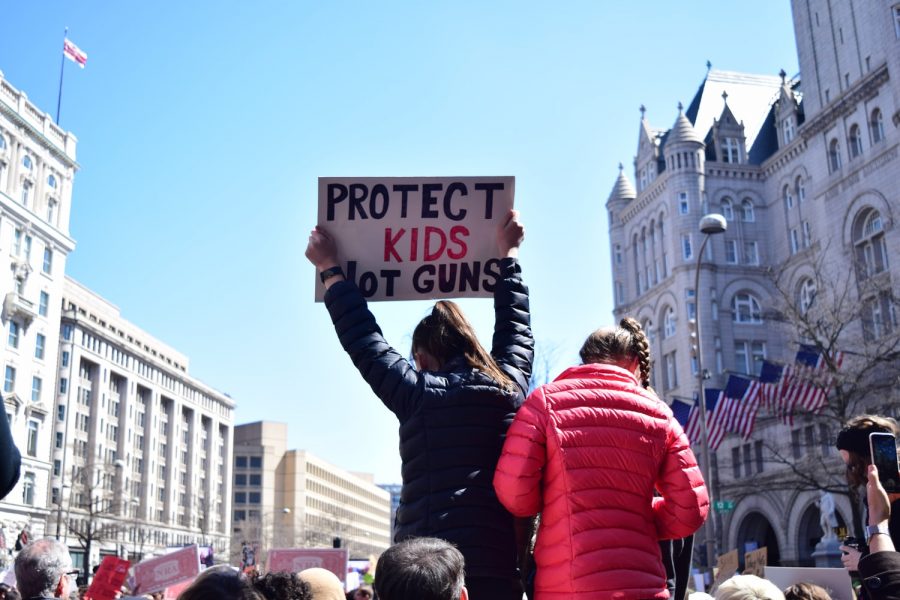 So much gun violence occurs in the United States each year that it is compiled into the Gun Violence Archive. The home page displays roughly a dozen major statistics that are updated each day: total number of incidents, number of deaths, number of children killed or injured and number of mass shootings.

The figures on the home page are almost too large to be terrifying. It’s difficult to grasp the tragedy of 10,964 lost lives or the trauma associated with 2,271 teenagers’ deaths and injuries, and these number exclude the 47,000 suicides that occur in the U.S. each year. As of Sept. 22, 2019, the 265th day of the year, there had been 309 mass shootings in this country, and a significant number of them occurred in schools.

Naturally, these numbers cause many to ask how can we protect students in these instances. Some people believe that directing schools to have active shooter drills is the solution, not comprehensive gun reform. Sandy Hook Promise, the gun violence prevention organization founded in response to the 2012 shooting at Sandy Hook Elementary School, released an ad this month that shows students excitedly showing off their school supplies, exclaiming how well prepared they are for the challenges of a new school year. “These sneakers are just what I need for the new year!” said a boy as he runs through a chaotic hall filled with students pushing into each other to avoid the shooter. “These scissors really come in handy for art class,” said a girl half-hidden in the shadows of a dark room, the scissors her only defense against bullets. The boy next to her is armed only with pencils. The video eventually cuts to the quiet of a bathroom stall, where a girl crouches on the toilet as she texts her mom what might be her last “I love you.” “I finally got my own phone to stay in touch with my mom,” she said through heavy tears.

This ad shows the precarious position American students are in, expected to use everyday objects and school supplies to protect themselves against the armed gunman stalking through their halls. It’s upsetting to watch, but probably not very far fetched. NBC reported this summer that fun back-to-school items like bulletproof backpack sales increased by 300% after August’s high-profile shootings in Ohio and Texas.

Active shooter drills have become commonplace in U.S. public schools as a way of preparing students for the worst. More than 4 million students experienced lockdowns during the 2017-18 school year, whether for a legitimate threat or practice drill. Given the statistics, this seems like it might be a helpful way to lessen fatalities during a potential shooting. Shooter drills are assumed to be a productive course of action, if not a necessity. But aside from not actually solving the problem, these drills can also contribute to the fear so many students already experience. Going through a drill that forces students to acknowledge how unprotected they are is sometimes a source of trauma in and of itself.

Take Lake Brantley High School’s hyper-realistic drill gone wrong from last year. Students were not warned that they were experiencing a preparatory drill, not a real school shooting. Aside from frantic efforts to escape or take shelter, students at the Florida school fainted, threw up and texted their parents goodbye, leading to dozens of unnecessary 911 calls. It wasn’t until 51 minutes after the school was put on lockdown that administrators announced that the situation was only a drill. This was undoubtedly traumatizing for students and their families, who said their fear has long outlasted the day of the drill.

Those of us who were students at the University of Utah in October 2017 might understand how that felt. When our fellow U student ChenWei Guo was shot and killed at the base of Red Butte Canyon, many students were left in the dark as to what kind of shooting was happening on campus and whether they were at risk of being harmed themselves.

I was a freshman, frantically working in my dorm on a paper that was due the next day, when my roommates and I got the campus alert. We turned off all the lights and shut the blinds on every window, listening as police cars wailed by the building in hordes that went on for hours. I abandoned my assignment in favor of texting my friends and family. “I think we’re almost safer than you are,” said a friend who was stuck at the library. “Sniper confirmed. Stay away from the windows,” said my RA’s report to the fourth floor group chat. “The whole campus is on lockdown. We don’t know what’s happening, but we’re okay,” I texted to my mom and dad.

My roommates and I huddled for hours on the floor of my bedroom, waiting for the sirens to die down and listening closely to the police scanner. The trauma of that uncertainty was not short lived, even after we learned what had really happened and that the shooting was not on a massive scale. I remember struggling to keep my breathing steady in a work meeting the next day and stepping out of the conference room to shed a tear. A year later I moved to an off-campus apartment, but all the anxiety of that first shooting came rushing back to me after I received text alerts that Lauren McCluskey was shot and killed on campus.

It doesn’t take a real shooting to cause this kind of trauma. My siblings were afraid to go back to class for days after their school in Sandy, Utah, was evacuated when someone wrote a bomb threat on a bathroom wall. Law enforcement did not believe the threat was credible, but the psychological damage was done.

In reality, most active shooter drills are less intense than any of these circumstances. Traumatizing drills do little but terrify students without lessening the likelihood of a school shooting. Even at their most mild, training videos having been linked to increased anxiety, and these drills disrupt students’ learning. Drills teach students to feel unsafe in their schools and these practices are detrimental to their psychological well-being. At their most damaging, these drills train students to accept America’s culture of gun violence as an inevitable part of life.