Alexandra Barbier Sets Out to Queer the Art of Performance 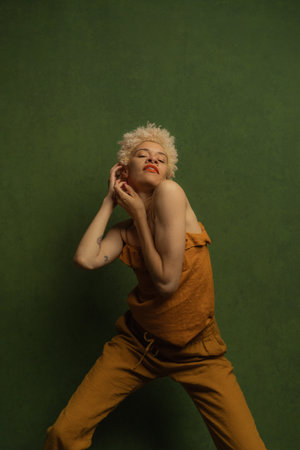 The University of Utah’s modern dance program has limited slots for graduate students who are looking to work hard to hopefully become professionals, gain more experience and be challenged in their art. Alexandra Barbier is currently in her third and final year in the modern graduate program and in the process of completing her thesis. As with other theses programs, the culmination of all of Barbier’s hard work comes to fruition in a final dance performance. This large project is also accompanied by the reality of seeking employment for when school ends. Barbier said, “It is the time when universities are beginning to post job openings.” Barbier’s process of working on her thesis, developing teaching methods and participating in her Making Queer Performance Art class all contribute to one thing: the heart of an inner rebel.

Since moving to Salt Lake City for school, Barbier has become well known, especially in the dance community, and recently performed at Fringe Fest this past summer. Barbier said, “Over the past two years, since I’ve been here, I go to dance concerts and I started to realize that my experience as a spectator in the audience. As much as I love dance, I got real tired of having to go into this theater and sit for two hours and not really do anything other than sit. Even if the choreography was really great, I wanted more.” Yet from this experience, the basis of Barbier’s thesis was born. She found being more involved as an audience member was attractive, different and something she could see the value in. Originally, she thought her piece would have to be performed on a proscenium (the part of a theater stage in front of the curtain) and accepted the challenge to connect with audience members in this formal setting. After performing at Fringe Fest in a space previously used as an old culinary store, Barbier said, “It inspired me to bring my work to a different space.” Barbier decided her graduate thesis performance would be an installation piece in a gallery or something similar.

“Your thesis work is what you take into the world with you,” Barbier said. She’s not willing to waste the chance to be phenomenally passionate about her work. As a teacher and performer, Barbier is all about sharing her passion with others. This played perfectly into her idea of teaching students how to create performances for alternative spaces. Students from the undergraduate modern dance program have expanded their comfort zones and learned valuable information on site-specific work through Barbier’s teaching. The interactive aspect of dance is something Barbier is fostering wherever she can, and in regard to the performance of the piece, Barbier intends “to set up individual experiments to invite the audience to participate in the performance.” At the time of performance, about 80% of it ends up being improvisation and collaborative with the audience. Barbier said, “The only success I can hope for is that the equipment works.” She can’t put a ton of weight into sound or movement since it is created in the moment, but the technology will provide a stable basis for the performance to build on.

One major aspect of being a modern dance graduate candidate is the opportunity to teach an existing class or one they designed, ideally incorporating concepts they believe should be changed in the class. Barbier created a Making Queer Performance Art class, which is available to all students and has received raving reviews since it began. Barbier received her undergraduate degree in French and gender & women’s studies. When it came to creating the class, Barbier said, “My women’s and gender studies classes were my favorite classes.” By choosing a modern dance graduate degree, she didn’t have the chance to take many classes of the kind. When it came to creating the class, Barbier said, “How could I continue to study and talk about topics of queerness and gender, while I am now committed to a professional dance degree?” Following the decision to make the class queer-based, Barbier said, “Performance art is a very rebellious art form.” This rebel mentality is something Barbier has lived by in all of her thesis work. “It speaks to the rebel in me, it has always been this boundary-pushing form,” which makes it perfect for Barbier. She said, “I thought putting the two together would be interesting. I have never honestly seen a queer performance class offered.”  Barbier realized there was a need and desire for one.

Barbier said, “I found it exciting but terrifying. Both concepts, queer and performance art, change very quickly.” Her original plan had almost become irrelevant because of constant changes by the time she planned to execute. She said, “This class is queer in that I am not going in with this very set 15-week unit plan.” Barbier has turned to collaboration and has been holding open conversation among students to hear their opinions and create understanding. When describing the class, Barbier said, “We look at people who have identified themselves as queer artists and we find themes within their work that sort of give us content to play with ourselves.” From this point of analysis and observation, Barbier said, “We come up with our own understanding of both topics [queer and performance art].” In the end, there is a collaborative definition for the two. Students are challenged to make their own work and push their own boundaries, no matter how they identify themselves. Barbier said, “If they have gone against the grain, they have made art.” It’s all about a rebellious spirit, a dedication to exploration and the love of an art form.

Barbier said, for her, “Queer means to stray from the norm.” Barbier herself identifies as a queer person and has worked with the community in varying degrees. “I used to have a queer blog in Baton Rouge, Louisiana which was an attempt to have a calendar of any queer event happening in the city.” Coming into this class, Barbier could see the need to have queer-based class in the dance program, but saw it on a broader and different level than many of us would see it. She explained how throughout her life, the longer she would identify as a queer person, the less she would make it what her life was entirely defined by. She became more comfortable with her identity. Barbier said, “For a while, recently, my thought has been more so the act of queering, rather than the identity of it.” In the past, she has created work about the identity of being queer, but since being at the U, her work has been focused on queering an actual performance.

Queer, in Barbier’s mind, is both a verb and a noun and can be used in both settings. “I am queer in the relationship between spectator and performer. My question is, how do you queer performance?”

Through her work, Barbier is hoping to not only understand this question but bring perspective to the conversation. “The work I make and the classes I teach are for the rebel. For the person who doesn’t want to be told exactly what to do, but still wants a suggestion of how to do something — without being micromanaged or being forced to be someone’s double.”