Women’s Swim and Dive Record First Ever Win Against Arizona 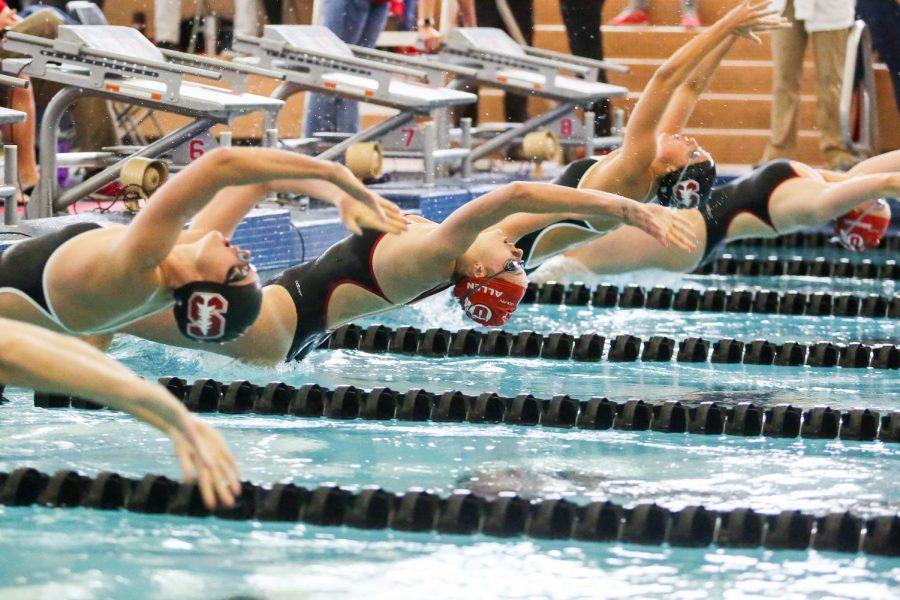 The University of Utah Swim and Dive teams hosted a meet against the University of Arizona on Friday. The women’s team registered the first win against Arizona in program history, winning 174-126. The men’s team fell 129-172.

Leyre Casarin placed first in the 100 free with a time of 52.09. She also won the 50 free (23.91). The Utes swept the top three in the 50 free with Maddie Woznik placing second and Kayla Miller coming in third. Sarah Lott, Mariah Gassaway and Emma Lawless teamed up with Casarin to win the 200 medley relay for the Utes, finishing with a time of 1:43.16.

Coach Speaks Glowingly
“Our freshman girls, swimmers and divers, in their first Pac-12 meet, their first real meet, they came out and helped us to sort of dominate,” said head coach Joe Dykstra. “A really inspiring performance by our freshmen women and our women’s team in general.”

“It’s thrilling,” said Dykstra, when asked about making program history with the women’s team’s first ever win against Arizona. “It’s a tremendous accomplishment anytime you do a first of anything.”

On the diving side, Tony Chen was impressive for the Utes, finishing top three in both events, 3m and 1m. Fridlander, DeRyk, Liam O’Haimhirgin and Finn O’Haimhirgin closed out the meet with a second place finish in the 400 free relay (3:02.70).

Next Up for the Utes
Both teams travel to California next weekend — the women have two duals, first against No. 25 UCLA, then against No. 15 USC. The men’s team will be at a meet against UCSB on Saturday. “We’re going to train hard this week because it’s our fall break,” Dykstra said “So we are going to be tired for those meets, but we were tired today and figured out a way to step up and swim well.”