No. 20 Utah Volleyball has Big Weekend Wins in Arizona 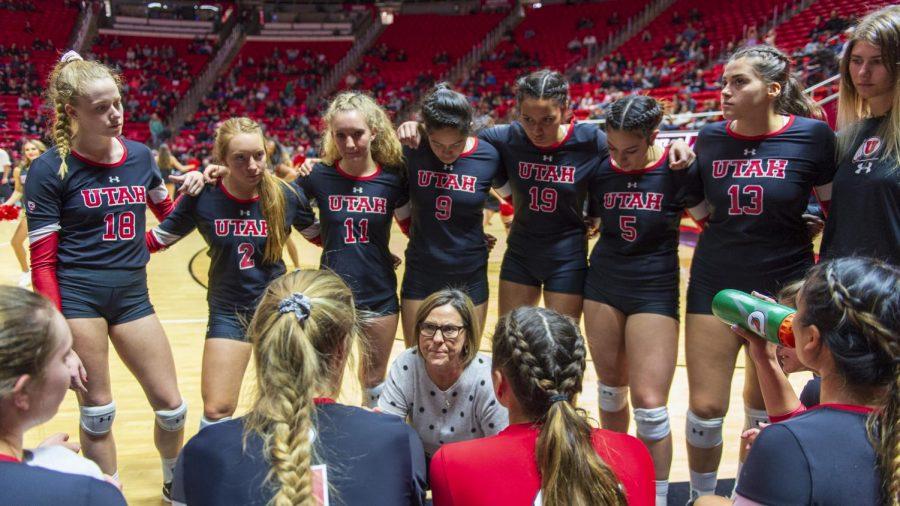 The No. 20 University of Utah volleyball team was in Arizona this weekend to take on both Arizona and Arizona State, coming away with two big wins and increasing their record (11-4, 3-1 Pac-12.) Last week, the team took on the Colorado Buffs and won in three straight sets, but lost to the Oregon Ducks after a hard battled five sets.

Down in Tucson, Arizona started the first set off by taking the lead early, but the Utes came back getting the lead at 17-16, then ended the set winning 25-20. In set two, the Utes and Wildcats were at a constant battle but the Utes got a good lead at 18-14, then the Wildcats answered back as the score went to 23-22, the Utes buckled down to take the match 25-22. As the Utes looked for the sweep the Wildcats, fought back and took the third set 21-25. For the final set the Utes, went into it relentlessly, taking the lead early and finishing the set 25-13.

Four Utes went into double digit kills. Leading the way was Dani Drews, who had 15. Berkeley Oblad had 13, Zoe Weatherington had 12 and Kenzie Koerber had 11. Saige Ka’aha’aina-Torres had 46 total assists. Oblad and Weatherington had great games with Oblad, hitting .522 and Weatherington hit .450. The Utes had Saturday to prepare for their Sunday showdown against Arizona State.  The Sun Devils were 2-1 after beating Arizona and Colorado but losing to UCLA.

Utah came out strong in the first set against Arizona State, hitting .567 and taking it 25-16 with only three errors and 20 kills. The second set was a battle between the Utes and the Sun Devils, as ASU held the lead late into the set, but Utah closed it out with a strong six point lead, ending it at 25-22. Utah took an early lead in the third set and never gave it up, finishing the sweep over Arizona State at 25-20.

Freshman setter, Emily Smith, helped her team in her first start with 35 assists, 13 digs, seven kills hitting .667 and 3.0 blocks. It was also Kinga Windisch’s first start of the season, and she helped out with five kills, four digs and 2.0 blocks. Oblad led the team with 12 kills, hitting .391. Drews and Weatherington both had 10 kills as well. This was Utah’s fourth sweep in a row over Arizona State and their eighth sweep of this season.

Next weekend the Utes will be back on their home court against UCLA and USC. The first game will take place on Friday night at 7 p.m. vs UCLA. The game will be a celebration for coach Beth Launiere as she enters her 30th year of coaching. Utah volleyball great Kim Turner’s jersey will also be retired at the match. Then on Sunday, the Utes will take on USC at 12 p.m. Both games will take place in the Jon M. Huntsman Center and will be broadcasted on the Pac-12 Networks.