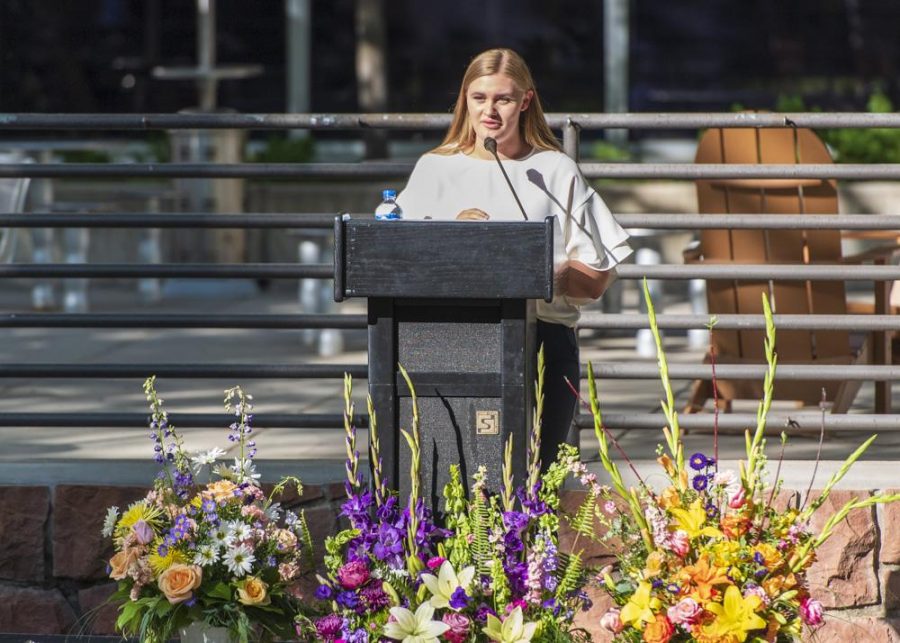 ASUU President Anna Barnes speaks to students, staff, and friends for a vigil in remembrance of MacKenzie Lueck at the University of Utah Student Union lawn in Salt Lake City, UT on Monday, July 1, 2019. Chronicle archives.

Campus safety has been on the minds of many at the University of Utah, especially now that SafeU Month has begun. In the first of many activities to come throughout the month, ASUU hosted a listening session open to the public to attend. There were students, faculty and members of the police force present, all of whom met to share their ideas of how to further improve campus safety. “I think everyone in this room knows that even though there has been a lot happening it has not been enough,” said student body president AnnaMarie Barnes.

Barnes and Student Body Vice President Gabe Martinez presented several areas in which they aimed to improve campus safety, including changes to personnel, online training, facilities and more. Most important was their question posed to the audience: what does safety mean to you? “Freedom,” said AnnaMarie Barnes. “Freedom to walk through campus. Safety to me means not having to feel vulnerable.” Members of her group took this opportunity to further open the dialogue of campus safety.

With the death of Lauren McCluskey being at the forefront of the issue of campus safety, officers from the Campus Department of Public Safety wanted to take this chance to dispel doubts from students and faculty present. “I quit my previous job to come here to help, and I want this campus to be a place where my daughters would feel safe,” said Officer Jason Hinojosa. “That’s the message I want to get out. We’re here to help.”

Hours later, the issue of campus safety was once again the topic of discussion as members of the ASUU Senate held an emergency meeting. The main topic of debate was whether or not they would pass the resolution that members of the ASUU assembly had passed just a week earlier. “The fact that the University is filing a legal argument that is pushing it as far as it possibly can in its legal defense is the correct thing for the University to do,” said Senator Devon Cantwell. “We are not here to question that tonight, we are here to question what means [the U is] using to achieve this effort.”

Members of the Senate addressed not only their own concerns regarding the U’s motion to dismiss, but those of their constituents as well. “Talking with my constituents, they don’t feel safe, they don’t know where to go,” said Senator Connor Leeming. The other senators went on to list more specific concerns, with the primary being that of victim-blaming being promoted by the University’s motion to dismiss.

“Victim-blaming, it’s a concern I’m seeing from all my constituents … my students even have come to talk to me in my class,” said Senator Rebecca Hardenbrook. “I personally am very outraged by what has taken place from the University’s response [and I think] we really need to step back and reconsider our priorities as senators and as a body.”

While all felt similarly, there were two particular voices that were concerned with the phrasing of the resolution presented. “The language of the resolution doesn’t work for me, and I wouldn’t be able to vote for it just because in my mind it’s important we’re factually sound,” said Senator Ben Lehnardt. Senator Sara Scholes agreed, feeling that the language within the resolution was ineffective in the way it addressed the University. “I urge us to focus on calling attention to actional items in the University policy areas where our opinions as students are not being heard and ask for accountability and student involvement to ensure that our voices and interests continue to be heard and represented.”

As the night went on, the Senate was unable to come to a conclusion and decided to postpone the vote on the resolution until Thursday at 5 p.m. Even if this particular version of the resolution is not passed, the Senate has expressed a desire to still pass a resolution with a similar message. “The point here is that our student body is disappointed, and that we aren’t being represented,” said Hardenbrook.

This article has been updated to clarify Senator Lehnardt and Senator Scholes’ position on JR2. Senator Scholes was also misquoted. We regret these errors.