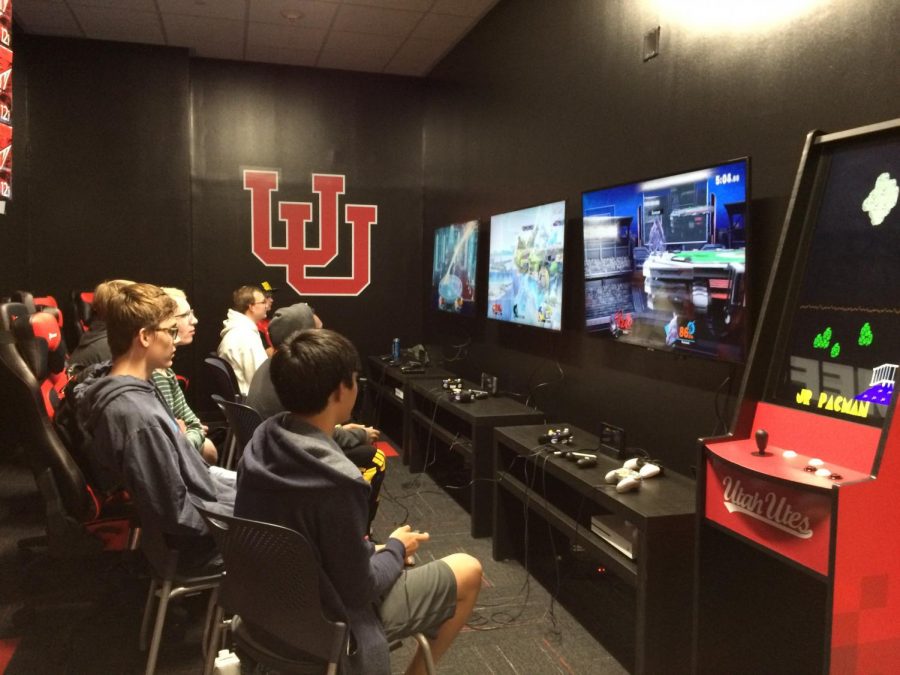 Students playing in the new gaming lounge. Courtesy of the Union.

The new Pepsi Game Fuel lounge, located on the first floor of the A. Ray Olpin Union, was revealed with a ribbon-cutting ceremony on Sept. 28 at 3 p.m. Renovations on the Crimson Commons included new leather lounge chairs, TVs, gaming systems — such as Xboxes, PlayStations and vintage-style arcade games — and a shuffleboard table. The renovation is a partnership between Pepsi, who funded it, and the Auxiliary Business Development Department on campus.

The opening included free food, music and access to all of the new aspects of the union, as well as a visit from Swoop and Pepsi ambassadors. They also gave away Mountain Dew’s new drink, Game Fuel.

The lounge is launched as part of Pepsi’s third year of partnership with the school. When talking about the needs and interests of students on campus, they recognized the exponentially growing relevance and popularity of e-sports on college campuses. With the launch of Mountain Dew’s new gamer-targeted energy drink, Game Fuel, everything fell into place.

Assistant Director of the Union Braden Dalley said that through the process they “want more students to use the space, and just want to serve the campus community better than before.”

They expect a positive reaction from students and have already seen it prior to the opening. Jeremy Wilkerson, assistant director of marketing, said that almost every 10 minutes before it opened people would come and ask about it and when they can use it.

“It has transformed this area of the Union, and gaming is taking off, and this has situated us quite nicely,” said Whit Hollis, Union director. Gamers on campus seem to already have taken to the new space, several gathering around to play Super Smash Bros during the event, and are excited about the potential it holds. Peter Velasquez, a student at the U studying gaming, said, “It brings gaming into a more open setting, where it is accepted and not frowned upon.” Fellow gamer Nick Na said, “It gives us an open environment where people of all places and backgrounds can bond over gaming.”

Access to all new additions to Crimson Commons will be completely free, including but not limited to Xboxes, PlayStations and arcade-style games. Students say this only adds to the appeal.

Pepsi’s partnership spans greater than the lounge, however, as they also offer student ambassador jobs and internships as well as $3,000 in scholarships through the Union each year.

Hollis expressed his gratitude for their partnership before the ribbon cutting: “Ever since Pepsi has come on campus they have been the most amazing partner and I can’t thank y’all enough, from the bottom of my heart.”

To promote the additions, on the Monday, Tuesday and Wednesday after the opening, everything within Crimson Commons — including bowling and pool tables — was completely free with a valid U Card from 12:30 p.m. to 3:00 p.m.