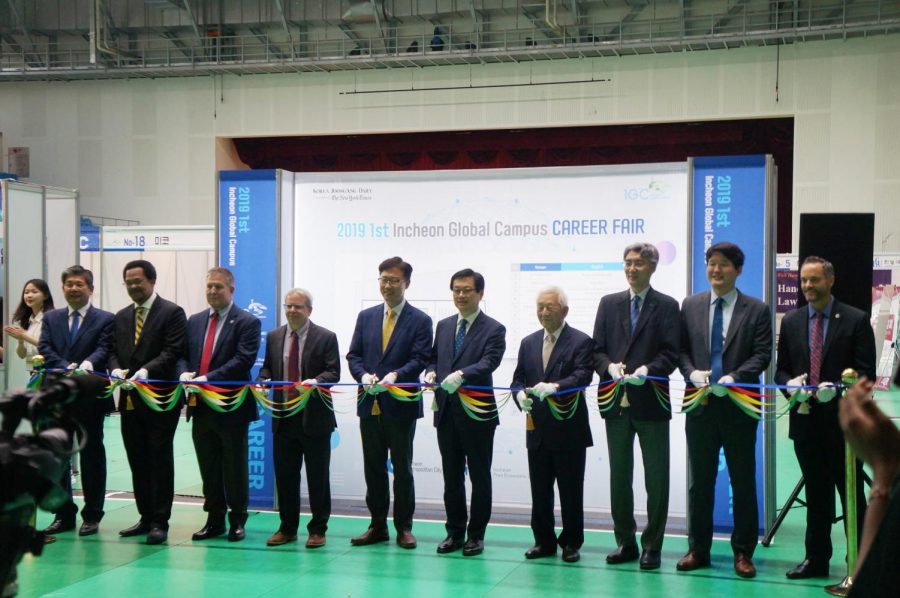 A message from Ki-hoon Paek, the CEO of the IGC Foundation, reads, “As IGC is aiming to become ‘the best global education hub in Northeast Asia,’ in order to nurture next-generation global manpower, IGC Foundation will make sure that all of the IGC students will have an opportunity to explore their interests in different fields and develop their own careers.”

All of the universities’ career centers contacted and gathered 20 institutions. UAC recruited the Spanish Chamber of Commerce, EAAFP, WHOCC, the graduate school of Utah and Biomedical Informatics. Arirang TV was also interested in participating in the fair and has promised to be at the career fair next year.

“As you know, the University of Utah opened the Career and Internship Development Center on April 16, 2019. Since then, the four universities have discussed IGC Career Fair and how we collaborate to support IGC students,” said Jinnie Park, assistant director of the Career & Internship Development Center. “We agreed that our IGC students look stronger in the career market when we are together, since all four universities have different majors and programs. Employers want to hire diverse candidates from different backgrounds. I think this will make our students be competent in the job market and will improve their attitude toward their job competencies compared to the past.”

The event’s program consisted of two special lectures from Hong-yun Kim, a data scientist from Samsung Electronics, and Tony Spaeth, editor-in-chief at Korea JoongAng Daily. To promote more attendance, emails were sent out to students a week before to pre-register to be able to get a free meal from the food trucks.

In total, the fair had five zones to visit. The first zone featured private companies such as MiCo Group, Jane Partners, Arvizon, Maeil, Binex, Neowiz and more. The second zone promoted international organizations like the East Asian-Australian Flyway Partnership, the World Federation of United Nations Associations and the Spanish Chamber of Commerce in Korea. The third zone had graduate schools that students could look into after their undergraduate years. They had the UAC’s Department of Biomedical Informatics, Handong International Law School, KDI School of Public Policy and Management and Korea University’s Graduate School of International Studies. The fourth zone was media and had Korea JoongAng Daily and Asian Boss.

“I found the career fair very helpful. It was highly organized, and I had a chance to get critical feedback from different experts regarding resume writing, job interview preparation and how to position myself in the tough job market,” said Minsu Kim, a student in strategic communications. “Through the fair, I have realized how narrow-minded and passive I used to be in terms of job searching and building a portfolio. Instead of feeling discouraged and undermining my ability, I should be more open-minded and confident about getting jobs.”

The last zone provided was the resume clinic. There were professional resume experts available to help and answer students’ questions about the current career market. They also hosted one-on-one resume help.

“This time students showed the most interest in the resume clinic. Therefore, we plan to expand that with a bigger booth and have more booths with similar clinics for photos and makeup. I have already contacted American Chamber of Commerce to invite their member American companies for the 2020 IGC Career Fair. Hopefully next year we can host 40+ institutions,” Park said.