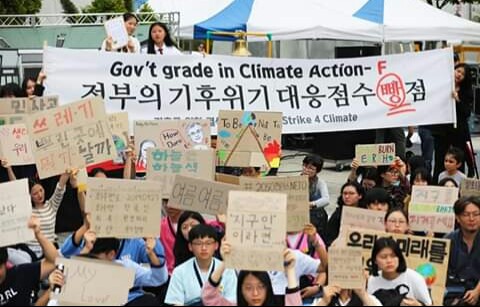 By Mitch Shin and Nina Yu

Leadership consultants at the University of Utah Asia Campus presented a series of Eco-Week events from Sept. 23-27, encouraging the younger generation to raise their voices to solve climate change issues around the world. UAC students were able to participate in various events and had the chance to receive prizes.

“The event that we planned for was an eco-friendly week, which consisted of several activities that could help people expand their scope on environmental issues and raise awareness,” said Chloe Hong, a leadership consultant at UAC. “I feel like a lot of people could take part in these activities and learn about ways to save the world from deteriorating. We also held [an event] at Cafe U, where we discussed several issues regarding climate change and global warming, which engaged many people to share their thoughts and opinions on current environmental issues.”

According to research at the Institute of Health and Environment in Incheon Metropolitan City, Songdo has poor air quality. Incheon Metropolitan City has also signed an agreement with Tianjin, China, to improve the air quality of the city in October 2018. The Korean government announced in March 2019 that it would actively interact with the Chinese government to respond to issues such as fine dust and yellow dust by establishing a research institute to share information with each other.

“As far as I know, humans are the main reason for climate change and global warming. I think that every change starts with smaller actions, such as using transportation instead of private vehicles and decreasing the use of plastic cups and utensils,” Hong said. “On a larger scale, governments should get together to make stronger bonds and promises to keep the world from advancing climate change.”

Reazul Ahsan, a professor in the Department of City & Metropolitan Planning at UAC, argued that there should be more productive actions to solve the issue.

On NASA’s Global Climate Change website, there are charts and graphs to see the extent of Earth’s climate change over the years. They have current global temperatures, carbon dioxide measurements, an ice sheet count, sea rising level measurements and arctic sea ice minimums. Their website may answer questions about what will happen to humanity and Earth if this type of climate change continues.

Ahsan emphasized that climate change is indeed a serious issue and a big challenge for all people. He also believes UAC students should be informed about it and find out the way they can actively cope with the issue. “Global temperature is rising at least two degrees, and it is time for the next generation to know it in more detail by accessing knowledge and technology,” he added.

According to a report published by the Intergovernmental Panel on Climate Change, the normal rate of increasing temperature must be 1.5ºC, and even a half degree increase will significantly worsen the risks of drought, floods and extreme heat for millions of people.

“Climate change has a tremendous impact on almost every part of the world’s economy,” said Simas Gerdvila, communications associate of the Green Climate Fund in Korea. Gerdvila also said that rising temperatures lead to an increasing frequency of severe weather events, putting people’s livelihoods at risk.

“There are many ways young people can get involved in climate action, but probably the most important one is to educate themselves about the topic and raise awareness around the urgency to act now,” Gerdvila said, and also suggested UAC students to ask governments and businesses to make systemic changes so that it will be easier for everyone to shift to a low-carbon, Earth-friendly way of life.

Representatively, Greta Thunberg, a young climate activist, has drawn huge attention to her voices regarding climate change. She made a speech at the U.N. Climate Action Summit on Sept. 23.