Before the First Snap: How Game Day is Made 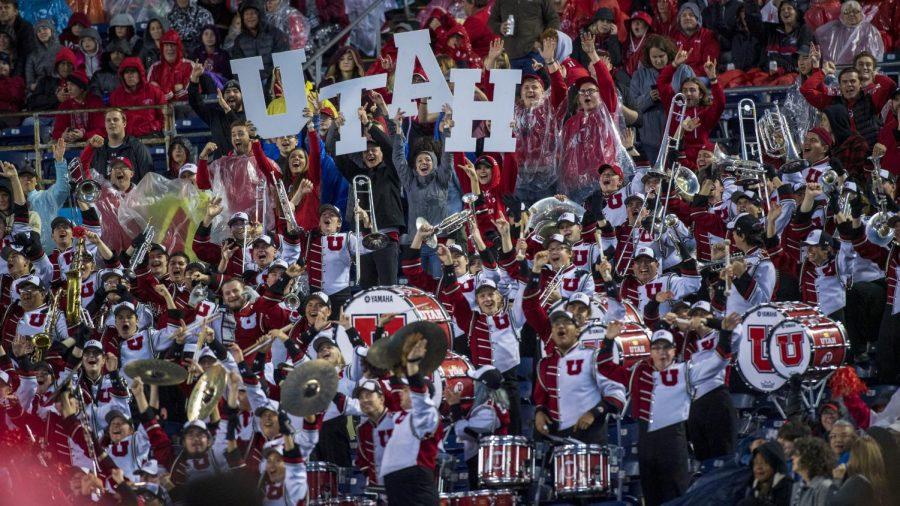 There is nothing that compares to the atmosphere of college football. Whether you’re in Tuskaloosa or Salt Lake City, the ambiance of a college football game is electrifying. The sounds, smells and sights are an experience only fully appreciated in person. 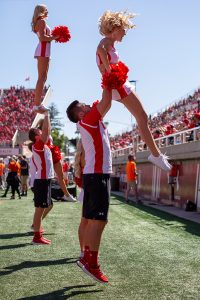 While football fans are a significant part of the atmosphere at games, what is a college football game without a marching band, flanked by the color guard? Who would lead the cheering traditions of the school if the cheer team was not present? What would fans watch during timeouts and halftime if a school didn’t have a dance company?

With all of these moving parts, any football game is a full production. After talking to the dedicated members of each of these groups, the real picture of what happens before kickoff is mind-boggling.

When the Utes charge onto the field, the fight song blares from all around the stadium. That music comes from one place — the marching band. Known as the Pride of Utah, the Utah marching band is a staple of game time tradition. While primarily seen at sporting events, the marching band member’s work is never done.

“We practice a minimum of eight to 10 hours a week and arrive four to five hours before game time to prepare,” said Max Shultz, drum major and assistant conductor. “We are constantly working and preparing for game day. It’s much more than just showing up for the game.” 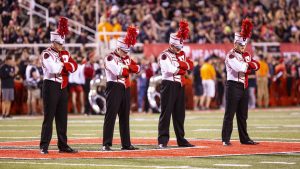 Schultz’s colleague and fellow drum major, Ryan Wing, agrees. “It’s a lot of work and dedication, but we love it. We think the marching band and the music is an essential part of game day.”

Maryanna Foulds, fellow assistant conductor and drum major with Shultz and Wing, elaborated on how the marching band views its role on game day and how they feel they impact the game.

“I think we’re critical to the game. We create a fun atmosphere, and we keep the fans and players involved. We are always pleased with the response from fans when Utah Man plays, and everyone is singing,” Foulds said.

With so much work off the field, the marching band is a dedicated group of students and faculty. Memorizing musical pieces and learning precise formations on the field — not to mention lugging around instruments all around Rice-Eccles — the marching band goes through a lot to cheer on their Utes.

“We work hard, but it’s worth it,” said first-year band member, Nicholas Anderson. “I’ve been coming to Utah games since I can remember. Now being a part of the band and creating that feeling that I love, it’s surreal.”

Anderson’s sentiment appears to be the common consensus among the marching band members. While the work is hard, the importance of representing the University of Utah and creating a football atmosphere is well worth the effort.

With the marching band marching across the field, the Pride of Utah is always flanked by twirling flags and the bright smiles of the color guard. Proudly sporting their “U” emblazoned flags and outfits, the color guard makes sure everyone in attendance knows they are sitting in the home of the Utes. 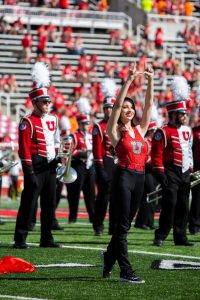 “We are the spirit of the marching band,” said Megan Johnson, who has been a member of the color guard for five seasons. “We love to create that gameday atmosphere and feel as though we do affect the mood of the game. We love to stay positive and cheer on our Utes.”

Color guard has definitely become a staple of game day tradition. With their famous flag performing skills, the color guard is yet another essential element that contributes to making game-day what it is. Johnson commented that while similar to the marching band, the practice schedule for the color guard is rather laborious. “We are practicing several days a week for hours at a time to be ready for kickoff. We all arrive hours before the game to completely prepare.”

Along with the color guard, game day would not be complete without two of the biggest staples of college football — cheerleading and the dance company. Known for pompoms, dance routines and getting fans involved in the game, these groups are an irreplaceable part of game day. 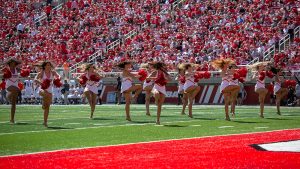 “Being part of the cheer team has allowed me to contribute to the university and has allowed me to be a part of something bigger than myself,” said Jared Heldt, senior cheer team member. “We absolutely impact the game, especially when we get in front of the MUSS. We feed off each other.”

Easten Aiken, another senior on the dance team, echoed what Heldt had to say. “I believe the dance and cheer team both make a huge impact on the fans. We are there to interact with them and show we are here for Utah spirit and for Utah football.”

Both Aiken and Heldt agree that their teams work hard to be ready to cheer on the Utes.

“We practice three days a week for three hours as well as arrive six hours before game day. We practice for an hour, then do tailgating, Ute Walk, and then go to the game,” Aiken said. 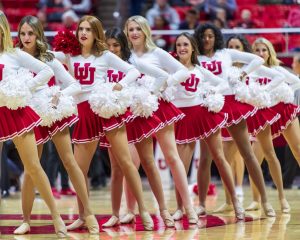 When each home game kicks off in Salt Lake City, the air is electric. Fans can’t wait to see their Utes in action. Before the first cleat sets foot on the turf, however, the energy is set thanks to dedicated members of the spirit team and marching band of the U.

With their hard work, school pride and love of football, fans and players owe many thanks to the creators of the game time atmosphere before the Saturday night lights.