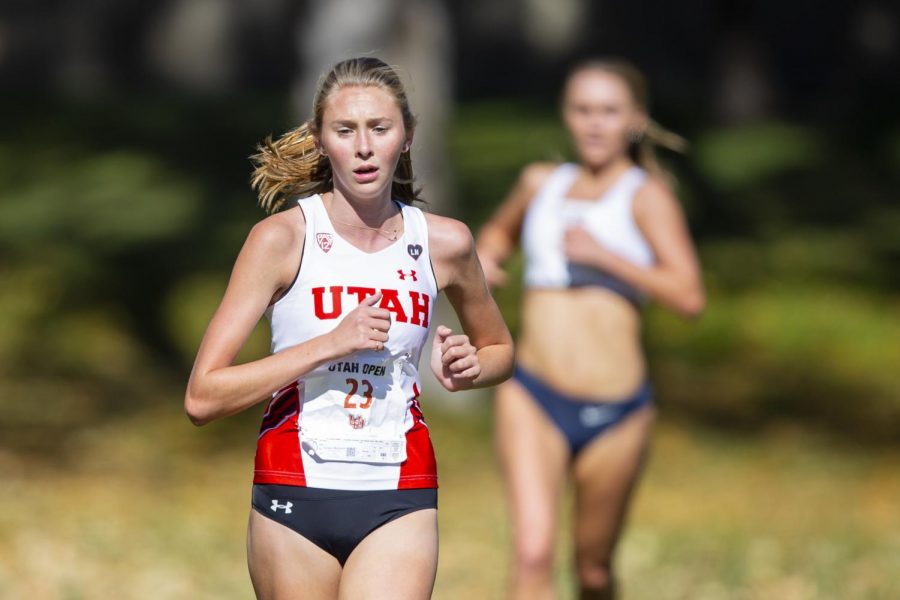 The No. 16-ranked University of Utah cross-country team hosted their first and only home meet of the 2019 season on Friday afternoon, capturing third place in the event.

Utah lined up in the 5k race against Utah Valley University, Weber State University, Southern Utah University and Utah State University. Also running were other collegiate racers racing unattached from their schools. This would be the only women’s race of the day.

A warm afternoon and favorable conditions proved to be key for a lot of runners at the race. The Utes lined up 13 runners, and the first five to cross the line counted as the scoring racers.

After the race, Burnett said, “Four laps was long for a cross-country race, but overall I’m happy with how it went. My teammates helped me a lot by helping me move up each group. I couldn’t have done it without working towards each next teammate.”

Head Coach Kyle Kepler also chimed in, “I thought Grace Burnett was Grace Burnett-like. That’s what that true freshman has done all year and she is just a competitor as a racer and she doesn’t get shaken during the race, so I’m certainly excited for her performance and how she’s doing.”

The next three runners to cross the finish line for the Utes were Nicole Griffiths, Sara Leonard and Kaitlyn Mercer, who finished in 22nd, 23rd and 25th places respectively. Griffiths crossed the finish line in 19:58.4, while Leonard clocked a 20:02.6 and Mercer finished with a new personal record of 20:07.8.

Running unattached from the Utes this race was Natalie Platil and Sophie Ryan, who both finished within the top 15 of the race. Platil finished the run in 19:30.9, finishing in 12th place while Ryan wasn’t far behind with a time of 19:31.5, which was good enough for 13th place.

The other runners crossing the finish line for the University of Utah were Abby Rasmussen, Astrid Lindgren and Ashley Licata. Rasmussen came in 31st place in 20:18.4, while Lindgren placed 36th in 20:44.2 and Licata finished in 29th place with a time of 21:17.0.

Utah State University would end up taking first place in the meet while the Utah Valley Wolverines edged out the Utes for second place. The Utah Utes would wind up in third place with 57 points.

“Today was a chance for some of our developing athletes to get out there and we also had a competition for some spots on the conference team as well so it was a dual purpose meet for us,” Kepler said. “Ultimately, I felt like the effort was there. We did a great job, we weren’t afraid to get into the race and we had some kids up front early. We had a great crowd out here today and it was awesome to see.”

The Utes are now focused on the Pac-12 Championships, which will take place in one week’s time. Kepler expounded on who to expect to see take part in the races for the Utes. “Poppy [Tank] and Bella [Williams] have led us all year, and Sarah [Feeny], Cara [Woolnough], and hopefully we’ll have Scarlet [Dale] back for the championships.” He continued, “With Scarlet out the past few weeks, we were able to see Trina Moreno step up and be that fifth scorer, so yes, you’ll see the names that have gotten it done at Joe Piane and Nuttycombe. They’ll have to be the ones to carry the flag for us and do what they’ve done so far.”

Next up for the Utes is the Pac-12 Championships which will take place on Friday, Nov. 1, 2019 in Monmouth, Oregon. The race will be televised on Pac-12 Networks.