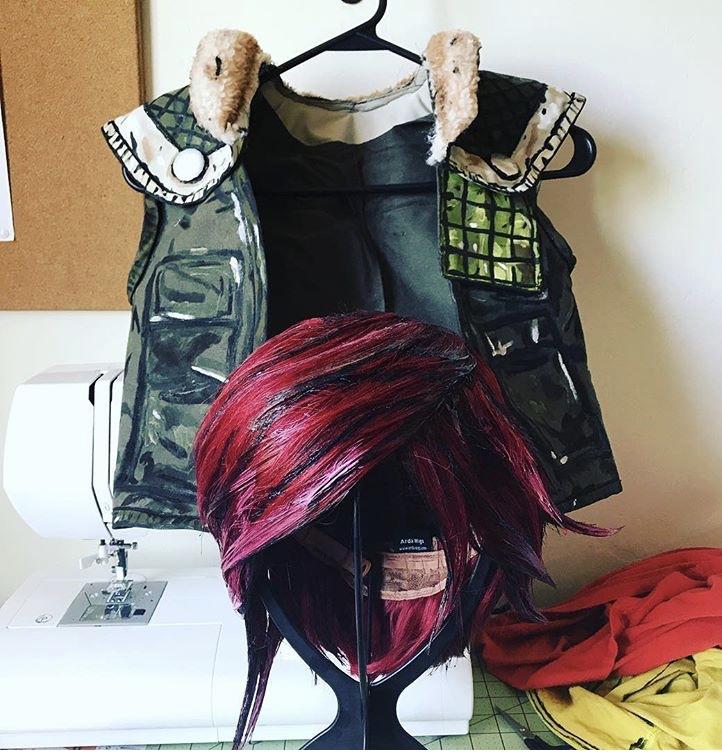 There’s a symbiotic relationship between video games and cosplay. Each builds off of the strengths of the other and ties together fans on either side. Those who enjoy cosplaying often have fallen in love with a character from a game and want to bring that character to life. Cosplay provides a fun way to express creativity both artistically and publicly, performing as these characters at conventions for like-minded fans. Choosing to embody a character from a video game can also be more intimate than other projects, since you get to play as and know that character virtually before recreating them in real life.

Cosplay Across the Valley

Salt Lake City is surprisingly filled with all things nerdy if you know where to look. Gaming and cosplay form a sizable subculture within the community. A local cosplayer known mostly for their “My Hero Academia” recreations and anime-related TikTok videos, Ali Chai, shared how they also enjoyed portraying one of their favorite video game characters: Aela the Huntress from “Skyrim.” “I’ve played ‘Skyrim’ for years and I still play it!” said Chai. “My favorite part was looking in the mirror after putting everything on and going, ‘I’m that character.’ And I really loved painting the pieces after I put them all together.”

Another Utah cosplayer, Sami, is known for her cosplay platform Lamae Cosplay. She strives to make these well-crafted ensembles to show off at each convention. Her cosplay, makeup and craftwork bring to life video games, anime and even original personas. When asked about her favorite cosplay, she recalls costuming as Lilith from “Borderlands.” Sami said, “Lilith was my first character ever in ‘Borderlands’ and [she] really solidified my love for the game and series. It mixes amazing humor and story with a ton of weapons and customization choices. I absolutely adored that game.”

Charlee, know by Charleemanderz on Twitch, considers herself a “Pokémon” streamer. She plans on doing special streams in the days leading up to the release of the new “Pokémon Sword” and “Pokémon Shield” games next month. In preparation for the recent Salt Lake FanX and TwitchCon, she put a cosplay together of the character Marnie from the new games. Charlee mentioned how surprised she was by how well received the cosplay was from her fans.

A couple of girls during this month’s Anime Banzai did a group cosplay representing their favorite characters from “League of Legends.” Chanz, who made a K/DA Evelynn cosplay from scratch, explained that she usually plays role-playing games like “Final Fantasy XV,” “Borderlands 3” and “Overwatch.” However, when suiting up as the pink-haired and gold-fingered Evelynn skin, Chanz said, “[‘League of Legends’] is pretty fun and different to what I’m used to. I mostly like ‘League of Legends’ because of the character designs.” The costume’s shawl cleverly acts as a large pocket to carry essentials, including a small portable speaker playing tunes from the character’s music video.

A Riot Games partner and Twitch streamer known as Emiru has been playing “League of Legends” since 2014. She explains that she likes to cosplay as all of the character Jinx’s different outfits — since the character is one of her “mains,” or preferred characters to play as in the game — and as Ahri and Xayah. “They’re my favorite to cosplay because I like the designs of the costumes, hair and makeup, and it’s fun to try to create the characters I love,” said Emiru. “I’ve cosplayed almost 50 characters now. I pick characters based on if I like their designs and if I like them as a character.”

My first real attempt at cosplaying was recreating a female boss from the intense game “Bloodborne,” named Lady Maria of the Astral Clocktower. Some friends encouraged that I group cosplay with them as I began playing this game. Her strength as a character both in the game’s narrative and in the boss battle made me want to try to personify her in real life. The outfit resembles a gothic victorian style with a pirate-esque flair.

There weren’t a lot of reference photos to work off of, so I had to maneuver the game’s camera into just the right position to capture the details in Lady Maria’s character. After making several scavenger visits to thrift stores, getting help from friends, ordering bits and pieces from Amazon and using a good amount of duct tape and hot glue, I finished the cosplay and weapons within two and a half weeks. The limited timeframe was essential in order to show it off at my first convention.

Though gaming doesn’t need cosplay to survive nor vice versa, the two heavily benefit each other in building up a community that brings fans together and extends beyond any single game or costume. Many cosplayers get their inspiration through cosplaying as their favorite characters. These are just a few examples of how the fun comes from not only embodying a character in a video game, but also by representing the characters in a more personal way. In recreating a video game character through cosplay, the cosplayer gets to deeply immerse themselves in that role and better appreciate that character.