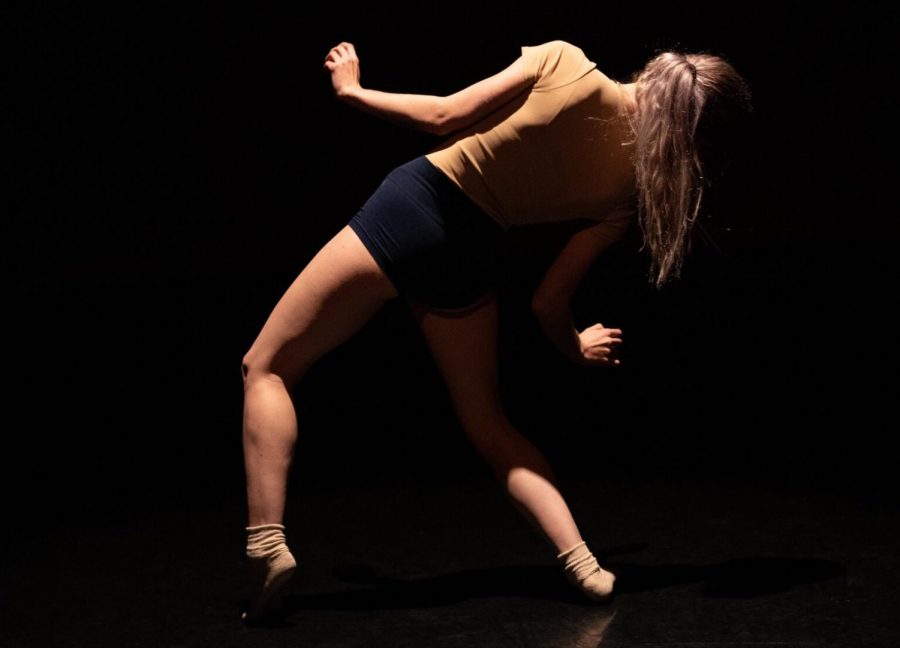 In their first concert of the year, University of Utah modern dances students used movement and dance to explore the theme of existentialism. Put on in the Marriott Center for Dance’s Room 240 black box theatre, each piece tackled diverse angles on belonging, isolation and being.

Audiences were seated in retractable bleachers, each asked to remove their shoes before walking into the studio. Though the gesture is likely only practical — it keeps the dance floor from getting scraped or scuffed — it did add an intimate element to walking into the theater. With one’s bare feet touching the cool floor across from a stage unhidden by any front curtain, the dark, close space imbues a sense of both openness and privacy. The setting couldn’t have been any more perfect for the concert.

Student Alicia Ross opened the evening as dancer and choreographer for her performance “Introspection.” Establishing a warm tone with orange light and a smooth electronic soundtrack, Ross tore between instances of running across to fixed points on stage and crawling against the ground, trying to stand as though a force were pushing her down. The overall effect grew from an atmosphere of uncertainty to definite conflict. Ross’ face changed from stoic to lost to fearful.

However, the dance was broken up by still instances where Ross paused and the chaos would temporarily vanish. She held her hands together in the form of a heart which she gently brought up from the side of her leg towards her torso, which she would then flip into a lens she placed over her eye and held outwards. These breaks brought acute meaning to Ross’ piece. In a sphere of inner turmoil and panic, peace came from a symbolic act of looking out into the world through the self, bringing individual purpose to an otherwise overbearingly infinite plane.

One of the strongest pieces of the concert, “where,” arranged and performed by Becca Webb, pushes existential concerns with more tangible imagery — a cell phone. Webb starts her dance with her downturned face lit by the familiar blue glow of a touchscreen. She swiped at it, and the device’s flashlight switched on. For the duration of the piece, this was Webb’s sole source of lighting. Webb moved delicately across the stage, at times slowly and in other moments quickly, as though she were moving through a flow.  “where” held a special kind of melancholy that brought to life the realities of performance art and modern technology. With only one sole dot of light illuminating the theatre that highlighted Webb as a singular figure in an expansive void, she also appeared small and lonely, another voice of countless others constantly uploaded and shared online. “where” beckons its viewers to not only contemplate what it means to be a part of an audience, but how we also appeal to our own audiences.

The concert closed on a more upbeat and comedic note. “Dolly Takes a Walk,” a satirical group dance created by Jorji Diaz Fadel, Eliza Kitchens, Erin Lynn, Glenne Miller and Severin Sargent-Catterton, investigated the absurdist dynamics of attending a dance class. The performers began by walking onstage and proceeded to undress and redress into new outfits (no explicit nudity is shown), just as any student does when getting ready to head out for the day. They took their time to button their shirts, fluff their hair and buckle their shoes before walking out onto a set made to look like a dance classroom. Desks were lined up in rows and a dance bar pulled out. One performer asked the audience whether “any dancers out there” have ever had “that nightmare” about not knowing what one’s doing when performing. She then said, “This is what this piece feels like.”

The concert’s other pieces, “correspondence” and “Young Trees,” both put on by dance groups, flesh out the show’s theme. According to its artists, “correspondence” serves as “an exploration of habits, tendencies and moods that are cultivated through creative movement in relation to other people,” a mechanical dance of push and pull between four battling dancers. “Young Trees,” meanwhile, tells a narrative of experiencing an”unfulfilling relationship.” These two dances, alongside the others, bound the show together into a strong unit of artistic expression.

This concert marked a high in performative achievement for the U’s Modern Dance student performers. Be certain to catch their next shows: the Graduate Thesis Concert in December and the Second Modern Dance Concert in February. Tickets are free and are given away at the door.