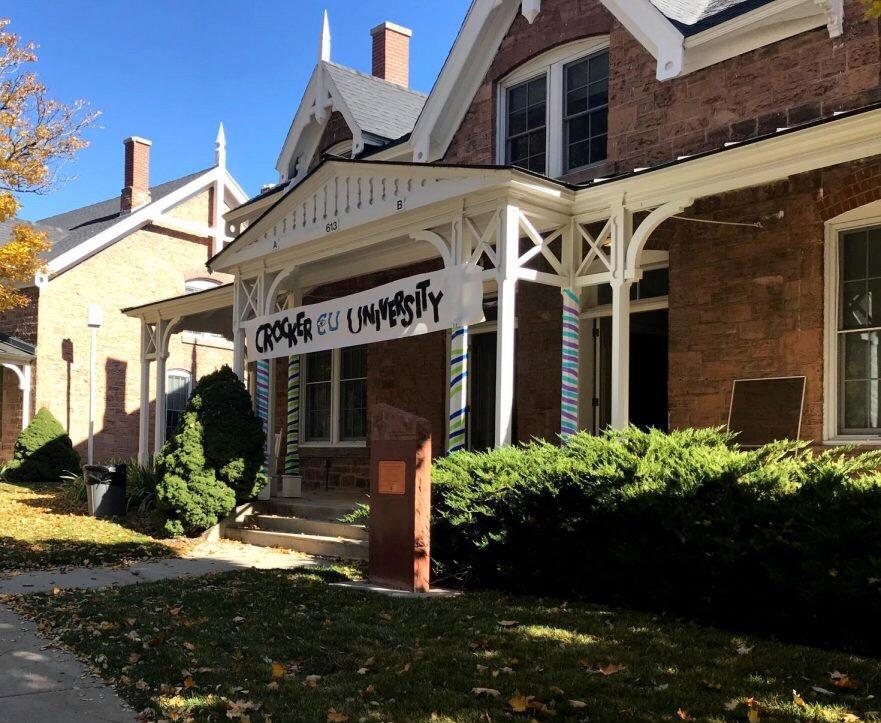 Officer’s Circle was transformed into a Halloween wonderland for the kids of Salt Lake and surrounding neighborhoods on Oct. 26 from 12-3 p.m. They had trick-or-treating, Halloween-themed games, snow cones, music and pumpkin painting that filled the part of Fort Douglas.

The College of Social Work, in collaboration with many other campus organizations, began the tradition several years ago for children in the Salt Lake area whose neighborhoods might be too dangerous to actually trick-or-treat on Halloween night. It has since transformed into an event for the whole valley. They invite children from Salt Lake, Granite, Canyons, Murray and Jordan School Districts.

The 10 houses in Officer’s Circle were decorated in many different themes including Harry Potter, Monster’s University, Medieval Fantasy and more.

Officer’s Circle 610, the Honors Thesis Mentoring Poulson house, spent 20 hours decorating its Medieval Fantasy-themed decorations, with help from all the residents. They even bought tape with their personal money as they ran out of the supplies from putting up so many decorations. The RA of the house, Maxton Cline said that there is a lot of pressure leading up to the event, but it’s always fun to dress up with the children.

“The best part is just seeing the kids smile,” they said.

One of the other groups that participate in the event each year is Latinas in Action. This year they set up several games for the kids, including a pumpkin walk, bowling, donut on a string and a witch hat tossing game. They rely heavily on community donations and discounts, and work on planning and preparing for weeks before the event.

The entire event is volunteer and grant-based, and the College of Social Work starts applying for funding and grants in July. They also work with Housing and Residential Education and the Bennion Center to get the event planned.

In addition to providing a fun and safe environment for kids to enjoy Halloween, they also make sure the event is accessible to everyone, providing wheelchair entrances to the houses and toys to children who may have certain dietary restrictions.

Lily Olvera, co-president of the Bachelors of Social Work student association, said that over the years the event has become so popular, there is a large demand and people regularly contact them to ask when it will be.

“A lot of schools we do target are diverse, and it helps them to see someone like them in a place to give back,” Olvera said.

She said that while this year has been a little slower than previous years, as they rely heavily on student organizations, she does not see the event stopping anytime soon.

Danielle and Orlean Fish came to spend time with their nephew and niece and said that all the kids seemed so excited. They said that it seems very detailed and put together, they also said that the parents seemed to get into the event also.

Brisa Hunter and her family have been attending the event for the last four years. “We love it, it’s very well organized,” she said. She said that they are always blown away by it, especially how original and put-together the houses are.