No. 12 Utes Play Lights Out in Dark Mode Game, Down Golden Bears 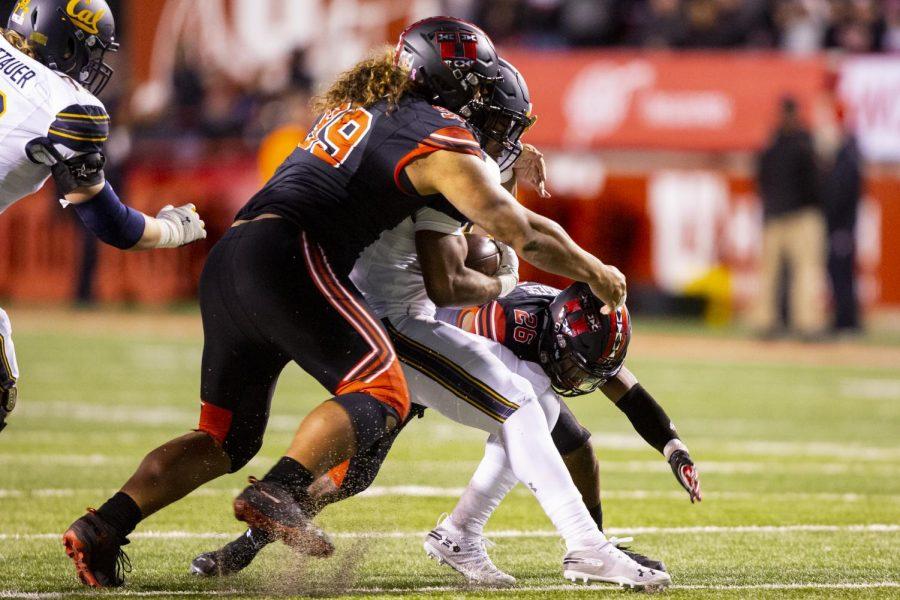 “I guess it’s about time,” said head coach Kyle Whittingham about the milestone. “It’s a nice job by our defense. An outstanding plan by coach [Morgan] Scalley and his staff.”

Senior running back Zack Moss had yet another record-breaking night, as he took down two more school records during the Utes’ dominating win. In the first quarter, he broke his first record of the night when he scored on a 4-yard rushing play. Moss now holds the record for most rushing touchdowns in one’s career with 33 total touchdowns. His second touchdown of the night came in the fourth on a 10-yard rushing attempt.

Moss also broke a three-way tie with Devontae Booker and John White for most 100-yard rushing games in a Utah career. Moss has 15 of those games now. He finished the night with 115 yards on 17 attempts and two touchdowns.

“He’s a special back,” Whittingham said. “He’s got the whole package, he’s got a great skill set and we are fortunate to have him and fortunate he came back for his senior year.”

“It all feels really good when you know it comes in a win,” Moss said. “Just grateful everything went well, everyone came out injury-free, so it was a good night.”

Senior quarterback Tyler Huntley played for the first half of today’s game, despite being banged up in last week’s victory against Arizona State. Huntley finished the game going 11-17 for 214 yards and one touchdown to Bryan Thompson.

According to Whittingham, they didn’t know if Huntley would be able to go until pregame warm-ups. But the team took it upon themselves to make sure that Huntley would not have to face the game alone.

“It makes me want to go harder,” Moss said. “The guy’s a warrior. I didn’t really doubt him missing this game, he prepared his tail off each and every day, late nights working and trying to get ready to go for this game. I know me especially and the o-line wanted to go hard for him.”

The Utah defense played lights out again tonight, as they held the Cal offense to only 83 total yards. While much of the credit can go to the team’s performance, the Utah defense believes that the defensive coordinator deserves recognition.

“Coach Scalley is a very, very, very smart man,” said Terrell Burgess. “He knows exactly what’s coming before it comes and puts us in the right positions, so we have to give credit to him.”

There was a bright spot for the Cal team, as Evan Weaver had 22 total tackles on the night for a struggling Golden Bears defense.

The Utah run defense made yet another case to prove they are the best defensive line in the country, as they only allowed Cal 23 rushing yards on the night.

“The defensive line, we take a lot of pride in that. We try to be the number one d-line, especially in the run game,” said Leki Fotu. “Coming off this game I felt like we dominated the line of scrimmage upfront, and that’s something that’s positive.”

Once Huntley was told his night was over, it was Jason Shelley time. Shelley was 4-5 during his time in a quarterback. He threw a touchdown to Brant Kuthie and ran one in himself.

The Utes now will keep their attention on the north as they get ready to face a Washington team that had their number with the Utes twice last season. And while the pressure is high for this game, there is always pressure in the conference of champions.

“Every game is a big game,” Burgess said. “Everybody is good in the Pac-12, and each week we need to come out and play great football because there are some teams that you wouldn’t expect to lose, and they lose every week.”

“They are a good football team,” Whittingham said. “I know they dropped some games this year, but they’ve got talent. They have a big, strong quarterback that’s got a big arm. Tremendous receivers, running back, lines are solid and they’re the Huskies and they’ve got as good of talent as anybody in the league for certain. I think we’ve only won once there since we’ve been in the Pac-12, so we got our work cut out for us.”