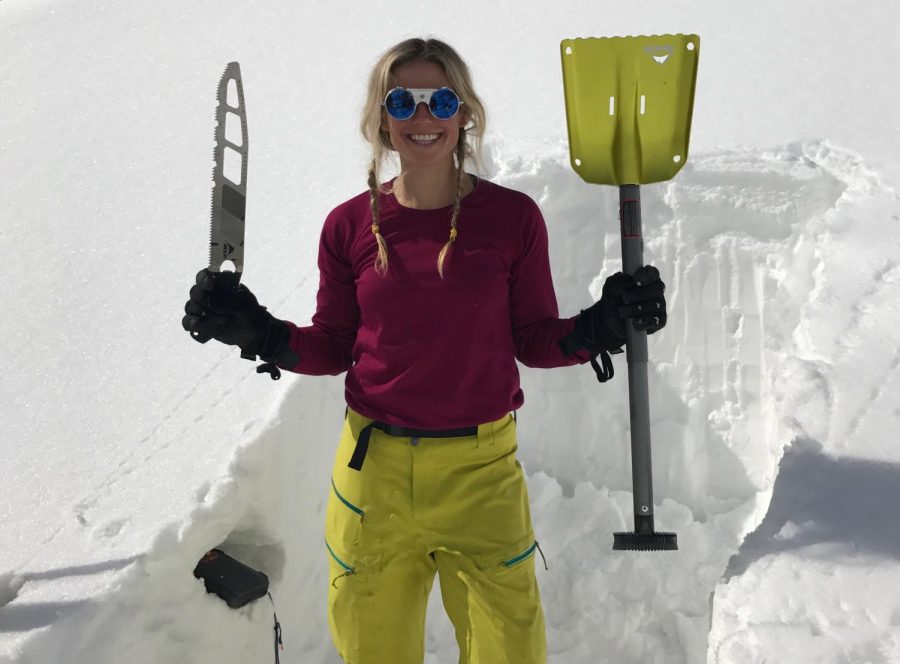 For many students, college is a launching pad for a future career. Some target a unique niche that seems made just for them, but a rare few manage to create one: doing what they love most, finding a way to get paid for it and making a positive impact along the way. Among these rare few is Caroline Gleich: a blogger, ski model, lobbyist, motivational speaker, ski mountaineer, professional outdoor adventurer and social activist.

Becoming an Activist
Gleich, 33, earned a bachelor of science in anthropology at the University of Utah, but all along, her heart was set on skiing.

Before moving to Utah, Gleich lived with her family in Minnesota, where she began playing ice hockey as an elementary school student. Gleich’s mother shared, “Caroline was agile and persistent — at times, almost fierce. Her dad often complimented her for the time she spent in the penalty box, recognizing how aggressively she participated in the game.”

Gleich’s dad, Dr. Gerald Gleich, said, “When we moved to Utah, Caroline was 15, and a junior in high school. Not long afterward, she was skiing a lot. In Snowbird, if you go up on the tram, there’s a very steep area called the Cirque. And it’s daunting. Caroline was committed to mastering it and skied it over and over — to the point of getting some frostbite.  At that point, I realized, ‘this kid’s serious’ — because the Cirque is not for wimps.”

“Being a professional skier was never really a career path that was acceptable in my family,” Gleich said. “My parents, they’re both physicians here at the University of Utah. They spend their waking hours literally saving people’s lives. So just skiing — that was just not an option for me. I had to find a way to have a bigger impact beyond skiing, even though in my heart I just wanted to be a ski bum.”

Dr. Gleich said, “Caroline was first on skis when she was about a year and a half old — not long after she learned to walk. We had some little zippy skis we strapped on her boots. By the time Caroline was 3, she was skiing the Magic Carpet run at Alta. She was precocious and competitive. She really wanted to keep up with her two older brothers.”

During Gleich’s senior year, she took an American national government course taught by Professor Tim Chambless. “He was such an amazing teacher,” Gleich said. “He asked us a question that changed my life. He said, ‘How do you want to interact with government? Do you want your only interactions to be when you pay taxes or when you get a speeding ticket — or do you want to come to the table proactively as a citizen, and use government as a problem-solving tool?’ That to me just clicked.”

Gleich has labored tirelessly on issues such as clean air, climate change, cyber harassment and gender equality. She worked hard to help establish the Bears Ears National Monument and was a voice helping Park City’s commitment to run on 100% renewable energy by 2032. Working with nonprofits such as Protect Our Winters, Heal Utah, Winter Wildlands Alliance, Wilderness Society and the American Alpine Club keeps Gleich busy when she’s not skiing.

On becoming an activist, Gleich said, “When I was experiencing cyberbullying, it got to the point where I could no longer be silent about it. Oftentimes, causes choose you.”

“It takes the same skills, attitudes and mindsets to become an activist as it does to become an adventurer,” said Gleich. “The first thing you do is follow your heart and take a stand on something that matters to you.”

Gleich also described lobbying at a federal EPA hearing. “Walking into this, they had bused up hundreds of coal miners from the mines, and given them all signs, and we had to walk through this super long barricade of coal miners. It was really scary,” Gleich said, “and when I spoke, not a single person clapped. At least I didn’t get booed. I’ve been booed before. … It was a really intense experience. But at the end of this, the EPA required Utah coal plants to cut emissions that were causing haze in national parks. So it ended up being a win.” Gleich added, “We really need to step up as outdoor adventurers and as skiers and as environmental activists, because it’s really like a David-and-Goliath battle.”

Outdoor Adventurer
Gleich likes to have what she calls “human-powered adventures.” Sponsored by companies such as Patagonia, Fat Tire/New Belgium, Clif Bar, Pret Helmets and Rylo, Gleich’s adventures have taken her to peaks all over the world, and have attracted over 158,000 Instagram followers. In 2018, after reaching the summit of  Cho Oyu in the Himalayas, Gleich dropped a knee, proposed to her then-boyfriend Rob Lea, took some photos and skied back down.

“You don’t go to these high-altitude mountains for good snow,” Gleich said. “If you want to find good snow, we have the best here in Utah.”

Sometimes called the poster girl of Utah skiing, Gleich has been featured on the covers of Backcountry, Powder and Ski Magazine (twice), as well as in trail guides, on billboards and in several articles and films.

Gleich has always enjoyed being outside. “I’ve found an incredible healing quality in nature, and that’s a huge similarity between activism and adventure — they both have a huge capacity to heal.”

Ski Mountaineering and “The Chuting Gallery”
Gleich is an avid ski mountaineer, meaning she skips the helicopter ride and scales steep, icy peaks on her own before skiing back down. Gleich explained no one can be a good ski mountaineer without also being a competent rock climber — and well-versed in avoiding avalanches.

“I really needed to get my fitness to the point where I could climb up these big lines and still have enough energy to ski down,” said Gleich.

To conquer the Gallery, Gleich needed to hike up and ski down Stairs Gulch, the very couloir where an avalanche took the life of her older half brother, Dr. Martin Gleich, in 2001.

Along with her husband Rob Lea, Gleich spent the past year advocating for gender equality through campaigns they created called #ClimbForEquality and #TriForEquality. In March, Gleich and Lea summited Mt. Everest just seven weeks after Gleich tore her ACL in a skiing accident. At Everest’s summit, the couple unfurled their #ClimbForEquality banner. Gleich explained that only about 11% of Mount Everest climbers are women.

“I want to see more women get to the top,” she said. Summiting Mt. Everest was the first leg of #TriForEquality, Lea’s self-styled “ultimate world triathlon.” In six months, he climbed Mount Everest, swam the English Channel and biked coast-to-coast across the continental United States.

“Caroline has found some unique things to do,” said her mother. “I think finding something you can do that actually leaves the world a better place is what we’re meant to do in this life. Personally, if you’d asked me what Caroline would do when she was 3, I would have never in my wildest dreams imagined this. In many ways, she’s an inspiration to our family.”

Reaching Your Own Personal Peak
Gleich acknowledged she was always more eager to ski than to sit in a classroom, but she believes past academic pursuits helped fuel her achievements. “My degree from the University of Utah helped make my career possible by teaching me vital critical thinking and researching skills. Learning how to evaluate information and communicate effectively is the basis for everything I do in my career, and I honed those skills during my time at the U.”

Gleich also encouraged other U students to seek jobs they will love. “My advice for students is to follow their passion and pick a career that makes their heart sing. The world needs more happy, healthy people who love what they are doing. Of course, with any job, there will be times you don’t love your work, but being passionate about it will make those challenges easier to get through.”

Lastly, Gleich advised not to quit. “If you don’t get your dream job right away, don’t give up. Stick with it. If you know what you want to do, be prepared to fight for it. Be relentless. So many people self-sabotage their dreams. Often, it’s because of a lack of self-confidence and/or commitment. Don’t let that be you.”