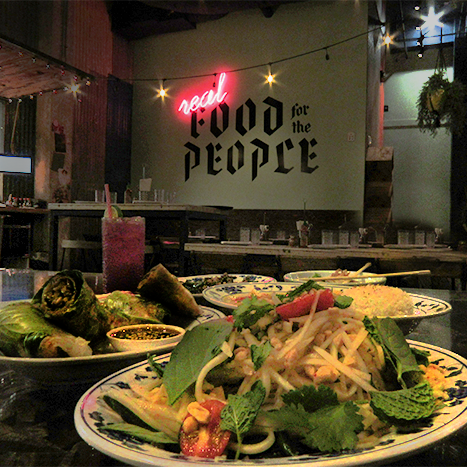 A luminescent neon pink sign lights up the corner of 300 South and State Street.  Standing out among its Salt Lake City neighbors, Ginger Street welcomes you with fanny packs, community tables, outdoor seating and its loud neon sign. New to downtown as of June 20, Ginger Street is serving hawker-style street food — not only is the food different to the Salt Lake area, but the restaurant itself can make you feel like you aren’t in Salt Lake anymore. In more ways than one, Ginger Street will push you out of your comfort zone.

The Ingredients
Upon walking up to the door, you can see everything happening on the inside. A large screen streams video of hawker-style cooking in Southeast Asia and the calm, ambient lighting brings an easygoing vibe. Yet, standing out among the general ambiance, are the people. After being greeted by the kind host, quick and pleasant service followed. Employee Ivy Watrous, and restaurant manager and owner Michael McHenry, ensured that every aspect of the meal, down to the paper straws on the table, were perfect. Ginger Street is run by a team of collaborators and people who genuinely want to create a friendly and communal atmosphere.

On the wall a quote reads: “Real food for the people.” Chef and business partner, Tyler Stokes worked to create what could be classified as a perfect hawker-style street food menu. Hawker-style was described by Watrous as what most of us would refer to as tapas style. Food comes as soon as it’s done. There is no waiting for the full order or the appetizer. All dishes are family style, further allowing this system to work, and yet another way McHenry can encourage community. The base flavors for the food are from Southeast Asia, where street food is sold based upon each business’ specialty. It is the job of the consumer to create their own mash-up of different dishes and styles to create their favorite and most fulfilling meal. “Everything we do we can stamp with ‘real,'” McHenry says. Ginger Street has nothing to hide about its locally-sourced food. The open kitchen hides nothing, the real flavors prove the food can be trusted.

I sat in the center of the restaurant at a table meant for fifteen. At first, I wondered why the host would sit us at such a large table. McHenry said, “People have got to learn how to sit next to others.” He shared how he had a passion to ensure people would converse. He said, “If I could have a bucket for cell phones, I would have one in the middle of the table.” This idea and culture of talking to random people you are sat next to is not common in Salt Lake City and McHenry has noticed the difference. He’s trying to get one step closer to initiate important and intentional conversation.

With the restaurant’s focus on conversation, you might think that the music would take a bit of a hit. On the contrary, Ginger Street has a live DJ Thursdays through Sundays who spins vintage vinyl. You can hop on over to experience ’90s jams, disco, house hip-hop and more. The music attracts visitors both young and old, creating a fun and easy atmosphere.

In keeping with the Hawker style, Ginger Street serves a wide mix of dishes. They have a yellow curry, steamed berkshire pork dumplings, green papaya salad, dry fried green beans and much more. I found the flavors to be a bit spicy, but still wholesome. The food will leave you feeling full, but not bloated and uncomfortable. The servers and kitchen also work to accommodate allergies and preferences of food by modifying for vegan and gluten needs.

Many of the dishes initially struck me as confusing and eccentric. But, upon eating them, the flavors just naturally flow and work in some miraculous way. Chef Stokes knows his combinations and has truly succeeded at putting them together. This doesn’t just apply to food, but the drinks as well. There are both virgin and spiked drinks available and many other options ranging from natural wines to iced Vietnamese coffee.

In addition, the menu remains surprisingly affordable. The dinner menu ranges from about $10 to $15 — reasonable for college students. There is also a lunch menu available, and McHenry put together a suggested combo of a Pabst Blue Ribbon “Extra” and their sinfully remarkable Spicy Crispy Chicken Sandwich for only $11. Best of all — lunch food is guaranteed in six minutes or less.

I had been contemplating about visiting Ginger Street since its opening, worried my daydream of what is was would be ruined. But, from the moment of entrance to the second I stepped out of the door, I could not have asked for one thing to be better. The engaging customer service kept me comfortable, calm and gave me an overwhelming feeling of being accepted and taken care of.  The atmosphere supported my community of friends I brought with me and the conversation was real. All the food was absolutely delicious. The last bite of Ginger Street’s magic for me was their famous desert — The G-Bar. Unfortunately, I can’t dare to explain to you what it tastes like. As Watrous said, “You’ll know what it is when you have it.”

“We are working to have an environment which is as exciting and flavorful as the food on the table,” said McHenry. It’s safe to say they’ve reached this goal. Food lovers far and wide have my full recommendation to try Ginger Street. Not only will it push you to break away from everyday life, but it will fill you with delicious food while you’re at it.

Special Recommendations
Be sure to try the Curry Special. Its perfect mixture of apples, sweet potatoes, shrimp and white rice can not be beat. A close second would be the Spicy Crispy Chicken Sandwich. This delectable phenomenon comes on a brioche bun, topped with green papaya slaw, tomatoes, jalapeño, kewpie mayo and a spicy breaded chicken patty.